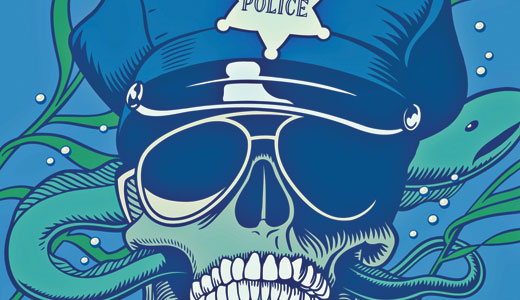 Reading David James Keaton’s stories and saying you hear a Quentin Tarantino-style motormouth is like saying Jim James’ singing reminds you of Neil Young. It’s tempting to use as a potential first crack at a reference point, but any close look makes it so shallow as to be nearly worthless. So, let’s just try to get a loose handle on this Louisville author. To this point, he’s been all about short stories (though there’s apparently a novel now looking for a publisher). Home turf for his plots would be rough redneck noir, but with occasional trips into surrealistic fantasy, along with modern-day horror (i.e., slaps of irony alongside splashes of gore).

Then there are the moments where cut-through-the-bullshit realism pushes at the crazy-quilt layers he’s built up. Sample: “… he wasn’t surprised when all traces of her were gone by the weekend. Except her collection of stolen cactuses, ashtrays, salt and pepper shakers, and waiting-room women’s magazines. And, of course, her glut of bathroom products, which is the last place every failed relationship exists, according to the cover story on the last rag she ripped off.”

Does that quote not hold with the title and cover? Keaton can find an authority to rail against at every turn. He betrays a bit of a too predictable pattern of throwing a self-loathing remark into the mix, as if that’s the ripping away of his final mask. But up until that point? Well, here’s how one of his narrative characters sees firefighters:

“One of the best kept secrets where I’m from is that firemen are the worst thing you can have show up if you have a fire. Not just because they won’t get there in time, or their general incompetence when it comes to navigating a smoke-filled room when no one’s cheering them on, but because, if you look real close, there’s actually nothing at all coming out of those hoses they’re holding. Some people might call this a sexual dysfunction. But all should agree that these assholes are just there to give the illusion of a rescue.”

The man at the keyboard has attitude to burn, no doubt, like a young James Ellroy on a meth binge. And “Fish Bites Cop!” is a generous collection. So consider this a sampler — many readers may give up on a percentage of the stories. There are exercises in style that don’t justify their bile. Even as you can feel Keaton’s joy seep through a character’s voice, the nasty playfulness can run on like some kind of medical test designed to measure capacity.

“Life Expectancy in a Trunk (Depends on Traffic)” serves up a nice (well, he’s never really writing about anything nice) example of a piece that’s near the line of just barely justifying the read time. Oh, but where Keaton can take his talents is not to be ignored. “Greenhorns” goes way over the top to take on outdoorsy reality TV — but without a diarrhea of monologue or dialogue, there’s room for the plot’s machinations to reverberate and poke at targets going back to Jack London and further.

Another candidate for the best story (particularly if you get tired of police getting the worst of the ragged wrath here) is the award-winner “Killing Coaches.” With impulses seemingly dialed back, the black humor maintains a fine balance. It’d be a shame if Keaton didn’t keep stretching himself — but his fiction might always be an acquired taste that’s taken best in short (and occasionally left-unfinished) doses.