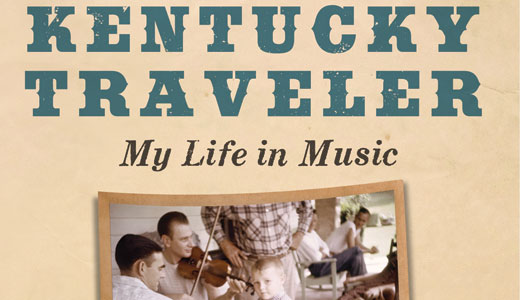 When he was 6 years old, Ricky Skaggs had a prescient encounter. He was living with his parents in Lawrence County in northeastern Kentucky when word got around about an upcoming concert. Bill Monroe and the Blue Grass Boys were to be playing nearby at the high school gymnasium in Martha, and the Skaggs family decided to go. They had heard Monroe for years over the airwaves, listening to his appearances on “The Grand Ole Opry,” and young Ricky was especially excited about going to his first live show.

It seemed that all of Lawrence County was there, but about 30 minutes into Monroe’s set, something happened. “Let little Ricky Skaggs get up and sing,” some voices in the crowd shouted. And so Monroe did. He handed Skaggs his mandolin, and soon the wee lad was leading the Blue Grass Boys in “Ruby, Are You Mad At Your Man?” Skaggs brought the house down, and to this day, he thinks he saw Monroe grinning at him from the side of the stage.

“There’s not a lot of people that have this defining moment at 6 years old,” Skaggs says over the telephone. “That was my first time to play with a full band — a bass player, banjo, fiddle player, mandolin player, guitar player. That was a big deal to a little guy.”

Skaggs explains that it was no coincidence he chose this scene to open “Kentucky Traveler: My Life in Music,” his new memoir. “Today, I try to love on little kids and encourage them when they come up and tell me that they play. I feel like I’ve got something to tell them.”

But Skaggs has got something to tell the rest of us, too, about what he has seen over the last 50 years of American traditional music. Skaggs has, if not seen it all, come pretty close. And he wanted to write about it while his memory was still good. “I’m not getting any younger,” he laughs. “I’m 59 and have gray hair. I felt like it was a good time to do it. Maybe it was therapeutic in some way, talking about my childhood and revisiting that time in my life.”

At 15, he met fellow teenager Keith Whitley, who lived nearby in Sandy Hook. The two became fast friends and collaborators, singing as a duo, and then for Ralph Stanley, when they finished high school. Their time with Stanley was a “game-changer,” Skaggs says, a learning experience that set up the rest of their careers. Whitley’s, of course, was a legendary mixture of triumph and tragedy, with a blaze of success on the country charts in the late 1980s before his death from alcohol poisoning in 1989.

Skaggs, for his part, has gone on to win 14 Grammy Awards and perform with the likes of J.D. Crowe and the New South, Emmylou Harris’ Hot Band, and now as part of Kentucky Thunder, which he fronts. Never one to be restricted by musical boundaries, he has shared the stage with Phish, Bruce Hornsby and even Jack White. Cluck Ol’ Hen, a live album recorded with Hornsby and released in August, showcases his diversity, peaking at No. 1 on the bluegrass charts.

“There’s a chemistry that really works,” he explains of his partnership with Hornsby. “He’s an incredible musical student. You can mention a song, and he can sing it. You mention a George Jones song, and he knows it — and right in the middle of some kind of jam we’ll be doing, he’ll just stop and sing Put the bottle on the table (from Jones’ “Just One More”). It’s easy for him to play this kind of music.”

Skaggs comes down more on the side of musical instinct in the nature vs. nurture debate, saying that although he retains an abiding love for Kentucky and its culture, he believes he would have been a musician if he had been born and raised somewhere else. “I think the gift was given and (music) was God’s path for me,” he says. “Now, would I have sounded like I do now had I been born in Chicago? No. Or Memphis or New Orleans or New York City? No way in the world.”