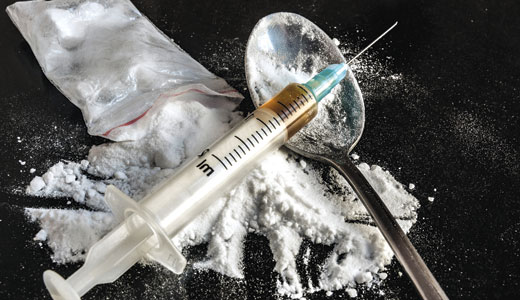 Heroin use is typically associated with big-city (as in, bigger than any city in Kentucky) subcultures. But in recent months, communities large and small throughout the commonwealth have been forced to deal with this major threat to public health.

LEO recently caught up with Detective Robert Puckett, a special drug enforcement investigator for the Kentucky State Police, to discuss the emergence of heroin in the region.

As Puckett explains, this outbreak of street heroin in Kentucky is connected to the opioid prescription pain pills (a synthetic cousin of heroin) that were rampant here during the last decade. In part, heroin is increasingly popular due to the fact that the black-market price of the pills has gone up. And they are much harder to come by as a result of law enforcement’s crackdown on that front.

Not surprisingly, this unforeseen turn of events caught a lot of folks off-guard. And everyone has had to adapt quickly. “I’ve been policing almost 10 years,” Puckett says, “and I’ve worked narcotics for six of those 10, but I had never even seen heroin until about eight months ago.”

There are reportedly several prominent varieties making their way into Kentucky right now that originated in exotic locales such as China, Mexico and Afghanistan. But, according to Puckett, regardless of origin, most of our heroin is coming directly out of Detroit.

“The Detroit gangs have made prior connections here and identified willing, locally-based business partners,” he says. “They’ll come here with the product, stay a few days at a time, and then go on back to Michigan while their local partners sell it to people who sell it to other people.”

Puckett makes it clear that these suppliers are “gangs” in the technical sense, but they aren’t the typical ones you’d see represented on TV (i.e. “Gangland”), which is the way most people who are naïve about what goes on in the world perceive gangs to be.

“These (gangs),” he explains, “are more like neighborhood clubs that are all block-oriented — like the one centered around 8 Mile Road. It’s not like your typical scenario where the Bloods don’t get along with the Crips and the Crips want to kill off the Bloods. These gangs have actually, to a certain extent, learned to work together for the sake of business.”

Heroin use has plenty of severe side effects and undesirable health consequences associated with it, not to mention almost instant addiction. But it is also much more deadly to our population than other abused substances.

Puckett suggests the biggest danger with street heroin as opposed to the pills is that “with the pills, you know what you’re getting in terms of content — you’re always getting a fixed amount.” With heroin, it is impossible to ascertain the purity level. This is why we are currently dealing with so many people dying from heroin experimentation. They never see it coming until it is too late.

“You might get used to buying a lower purity level of heroin that gets you what you are looking for as an addict,” Puckett says, “but one day you might happen to get some really high-grade stuff from Joe Blow up the street, and — Bam! — it blows your heart out and you’re dead. You overdose on the spot because your body just can’t handle it.”

Another reason heroin is so dangerous is that it’s easy to get. “You probably know someone who can get you heroin, that’s how prominent it is. There’s a hell of a market for it right now,” Puckett laments.

But this pragmatic narcotics detective does see a way out of the darkness. “We definitely need to focus on better education about the dangers as well as intervention for known users,” Puckett says. “And, obviously, continued law enforcement is key. With any trending drug, law enforcement can eventually make a difference. The pill problem is a perfect example. However, the problems we face in our communities are always evolving. Users transitioned from cocaine and crack cocaine to go to these pills. But now that we reined in the pill problem, you see what happened — here comes heroin. And when we shut the heroin down, what’s next? Sadly, in my line of work, there’s always going to be more work to be done.”