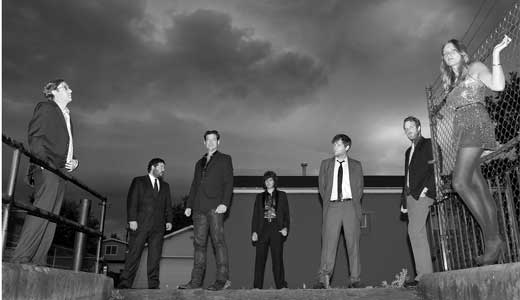 Black Diamond Heavies drummer Van Campbell was at the Air Devils Inn, sitting with bassist/vocalist Eric Makowski, formerly of Austin’s garage rock/soul band the Bloody Tears. They had just met and began talking about starting a new band, “something just for fun,” Campbell says. “Soul music was a part of the conversation, because we thought it would be accessible from a playing standpoint,” the drummer adds. “There are plenty of bands out there that are doing this ‘soul revival’ kind of thing, which is great. I’m glad that, though that was our starting point, we have kind of turned into something that is unique.”

Their seven-piece band, Junk Yard Dogs, has since made a name for themselves through their potent live show over the past couple of years, and now have a record available. The band plays WFPK’s New Year’s Eve show at Headliners, though Campbell clarifies, “There will be guests joining us along the way, and we will be more of a house band than a featured act.”

As a warm-up, they will play on WFPK’s “Live Lunch” Friday at noon. “Normally when we play, it is at various dives around town that are dimly lit and where the patrons are impaired by alcohol. If you like your dirty soul music with a bit more clarity and a sandwich, then you should come on down to ‘Live Lunch,’” says Campbell.

Their record evolved from contemplating covers to writing originals, both together and in smaller groups. They rode up to Detroit to capture their sound with engineer Jim Diamond, who had previously worked with both Campbell and Makowski. “It took a lot of planning ahead to figure out how to make it all work with seven people and a very short window of time, which I was worried about because trying to plan any aspect of a recording session can be ambitious. It turned out to be an amazing experience.”

Asked to name some favorite local bands that don’t include Dogs members, Campbell replies, “It is hard to mention ones we don’t share members with!”