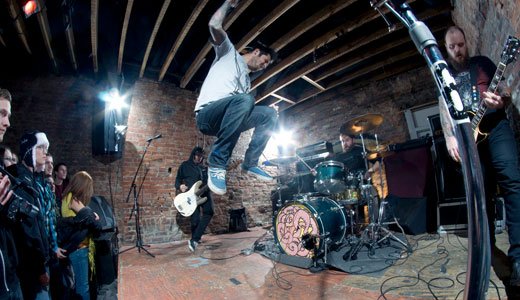 Melodic hardcore punks Automatic are back for one night only, Friday, at the Mag Bar — and here to help, in the true spirit of the season.

LEO: You’re all busy men. Why bring this ol’ band back together again?

Ryan Patterson (guitar): The band ended in early 2000, but we’ve all remained friends over the years. We recorded a new song and played a few shows in 2010/11, and all of us had a good time.

Matt Wieder (vocals): The simplest answer is because playing melodic hardcore is really fun. Sometimes it’s nice to get back to basics and play the kind of tunes that made me want to be in a band in the first place.

LEO: Any special reason why you’ve decided to play this show as a benefit for homeless folks who need clothing, as opposed to some other worthy cause?

MW: When we were putting this show together, one of the first things we talked about was making it a really low door price or free. That led to the idea of some sort of benefit show, and I really wanted to make sure whatever we did, it could have a direct impact on someone’s life. I knew the amount of money we could bring in would be relatively small, so when Ryan suggested a blanket/clothing drive, it just made sense.

RP: The winter can be a particularly difficult and dangerous time for the homeless, and it seemed to us that something as simple as donating warm clothes and blankets could directly help some people. All of us are very fortunate in our lives, and trying to help bring some warmth for others in need felt like a better idea than trying to make a few bucks for an inactive band.

LEO: Any truth to the rumor that we might get a new EP sometime?

MW: When we got together in 2011 and recorded the new song, “Limits of Control,” we actually wrote about seven or eight more songs as well. So yeah, I would say there could be some truth to that rumor.