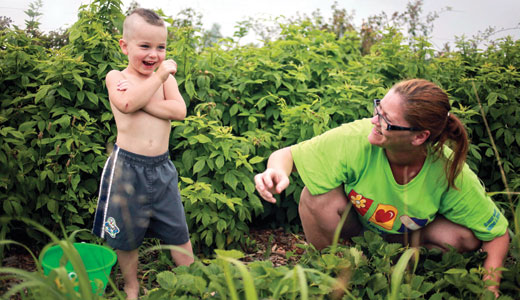 In one of the photos, a man walks behind his wife as she walks down the beach holding their child. He is holding up an umbrella to shade his family from the sun overhead. Behind them, the calm blue-green waters and inviting beach of Indonesia.

This might not be the type of photograph one would expect to see at an exhibition whose topic is violence against women, but this isn’t your typical exhibit or museum. It’s “Shining a Light: Working Together to End Violence Against Women,” the most recent offering from the Muhammad Ali Center, which operates under the principle of making the world a better place. That means not just highlighting important issues, but offering real-world solutions and inciting action.

The exhibit is a collaborative effort between the Ali Center and MensWork, a Louisville-based organization focused on developing male leadership to prevent all forms of sexual and domestic violence. The two groups have worked together on prior, non-exhibit projects at the Ali Center, including a community discussion centered during last year’s Domestic Violence Awareness Month on men’s role in ending violence against women. According to Erin Hebert, the education manager at the Ali Center, the exhibition was a natural next step because images transcend language and expand the conversation beyond what words can relay.

The Ali Center and MensWork put out a call during the spring for digital submissions, receiving more than 60, from amateur and professional photographers of all ages from around the world. The only directive was that the images and their accompanying narratives had to focus on the impact of violence against women and/or actions to combat the epidemic.

What resulted is a complex, diverse interpretation of the theme. With its nod to cultures where women must follow behind their husbands, the aforementioned photograph showcases gender equality and respect on the simplest, most individual level. Others take a broader scope: a close-up of a woman’s hand on an election ballot in Albania, where wives are often forced to vote as their husbands demand, or a portrait of an impassioned female protestor in Egypt’s Tahrir Square who is screaming while male onlookers laugh and dismiss her.

One series of images featured in the exhibit draws attention to the discrimination of Nepalese and Indian women who have been labeled witches, the witchdoctors who financially benefit by “protecting” communities against them, and the work of one ophthalmologist who debunks the existence of witches by showing children the science behind the “magic.” A separate series highlights the advocacy and direct support work of Greenhouse 17 (formerly Bluegrass Domestic Violence Program), which runs a family-friendly shelter on a 40-acre farm outside of Lexington.

Hebert says the Ali Center and MensWork are crafting kindergarten-through-college curriculum to correspond with the gallery. After “Shining a Light” ends in January, they hope to tour the exhibit across the United States to educational institutions, community centers or cultural centers like the Ali Center that are similarly committed to gender equity, global citizenship and education.

Although the overarching theme tackled is heavy, the gallery is largely family friendly, with no graphic violence. Here, the goal isn’t to shock but to expand our understanding of violence as more than just domestic violence within homes, or a third-world problem, or whatever preconceived notion is in your head. Violence against women is addressed as a global epidemic that will only be quelled with a multi-faceted approach. It’s apparent enough that children are cognizant of it. More than one of the exhibit’s photos were shot by teenagers or children — the youngest of which is only 10 years old.

“Shining a Light” is designed to be an annual showcase. According to Hebert, the center has already begun fielding inquires from photographers or organizations who missed this year’s deadline. Submissions will open up again in the spring, with the exhibit to debut in the fall.