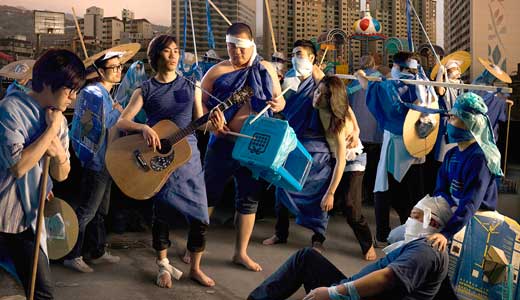 It’s rare that we get to see how an artist creates. Unless you’re in the studio when the glass is being blown or the oil paint is brushed on the canvas, it’s all a bit of a mystery. But occasionally we get to peek behind the curtain. James Robert Southard, who recently won a merit award at the Louisville Visual Art Association’s PUBLIC Photo Exhibition during the 2013 Photo Biennial, has decided it’s time to share how he creates his large, detailed photographs.

LEO: You once worked for LEO — when was that?
James Robert Southard: I got my first photo job as a photo intern at LEO years ago, before I left town for grad school (at Carnegie Mellon in Pittsburgh), so that would be around 2005-06.

LEO: What have you been up to?
JRS: I have a photo series I’ve been working on for years in Kentucky, Pittsburgh, New England and in Korea. Well, it’s been a few years since I did one in Louisville. I’m continuing the project in New York next month, but before I leave, I’m doing another one in my hometown. Usually I like to do my photo shoots alone, but a couple of my colleagues who have been on location said it was something to see. I’m very interested in the process now.

LEO: This photo series, “Tooth and Nail,” when did it start?
JRS: It’s something I started in 2010 in Pittsburgh and have been working on there and in Louisville. The photo series is a conceptually collaborative photo project where I allow groups of volunteers to help build the composition. (It) took me to South Korea … soon after I brought it to Skowhegan, Maine … That was the last one for a year. It wasn’t until I returned to Louisville this fall that I (considered bringing) the series back working with Louisville folks.

LEO: And what’s the Louisville photograph about?
JRS: The topic is arborists.

LEO: Where did you shoot it and how long did it take?
JRS: The shoot’s at Limbwalker’s down Dumesnil Street. They (opened) up their headquarters as the backdrop for the images. The people have increased — this shoot had 20-30 people … with some costumes and playful posing. It takes two to three hours of shooting, plus two weeks of prep before that, then one to four weeks of Photoshop. I shoot people in the studio, then Photoshop the location into the scene. I couldn’t do (what I do) without it.

LEO: Why is it important to you to explain how you make your photographs?
JRS: I’m starting to document the process. The final image looks like it was taken in one setting, but it takes dozens, if not hundreds, of photographs to make one scene. The average size (of my finished photograph) is about 36 inches by 45 inches. The scale is what I saw in museums — my photographs do not look good small. It’s become less of a photograph, more of a painting.