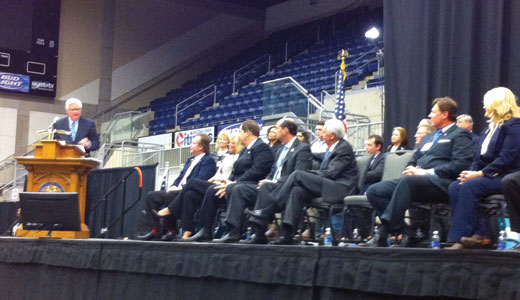 More than 1,700 people packed into the Pikeville Expo Center last Monday for the Shaping Our Appalachian Region (SOAR) Summit, a day-long conference designed to explore ways to diversify and rejuvenate the economy of eastern Kentucky, the impoverished region further decimated by the rapid downfall of its signature coal industry.

SOAR was spearheaded by Gov. Steve Beshear and Congressman Hal Rogers, two of Kentucky’s most vocal critics of what they’ve often called the “War on Coal” waged by the EPA and Obama Administration, their favorite scapegoats for the loss of roughly 6,000 coal mining jobs in the region over the last two years.

However, such rhetoric was completely absent from their vocabulary at SOAR, or any other elected leader who took the stage. Instead, they both gave a frank assessment of the reality that those coal jobs lost are not likely to come back anytime soon — no matter what the EPA does — and how leaders and citizens must work to find new ways to breathe life into the region if it is to have any hope for the future.

Such truths, often derided as the heresy of elitist liberals and environmentalists in the past, had suddenly become the new conventional wisdom … at least for that day.

After eight hours of speeches, lectures and discussion on the many ways to diversify eastern Kentucky’s economy, raise its standard of living and prevent further brain drain, now comes the hard part: holding onto the spirit and urgency of the day, figuring out how to accomplish these goals, and seeing it through.

Beshear opened the summit by saying that coal’s role as the kingpin employer of the region was in a steep decline, and while it will continue to play a role, “to ignore that is to blindfold ourselves and stick our heads in the sand.”

Rogers hoped this day would go down in history a century from now as a new beginning, warning that the task ahead “will not be easy. It will not be quick, and it will not always be successful. There are no silver bullets, but there may be some golden rewards if we stay with it. So we’re asking you to pull together as a region, as a team.”

Throughout the day’s many panels and breakout sessions, consensus emerged that the individual fiefdoms within county lines must be a thing of the past, instead looking to planned, strategic initiatives spanning the region. Those proposed included some old standbys — more road construction and industrial parks — but also a flood of newer ones, such as creating a new “Gatlinburg” of tourism, expanding broadband access, exploring renewable energy projects, sustainable farming, moonshine and bourbon distilleries, and expanded arts and entertainment venues.

But the lesson that arguably resonated the most came from a presentation on the lessons to be learned by the iron range of Minnesota. The northeastern corner of Minnesota suffered an eerily similar decline of its iron extraction industry in the 1980s, but the Iron Range Resources & Rehabilitation Board (IRRRB) — a development agency the state created decades earlier — helped soften the blow and transition the region’s economy.

Whereas half of Kentucky’s coal severance taxes go back to individual counties, where they are often misspent or wasted, the IRRRB served as a planning body that kept the money in a permanent trust fund, using its interest to fund specific programs for the region. IRRRB’s projects involving education, tourism and manufacturing have diversified the economy and boosted employment in the region, and it currently has $142 million in the bank.

Though ignored by many Kentucky state legislators for years, this is nearly identical to the proposals long advocated by the Mountain Association for Community Economic Development (MACED). “There’s a lot of good energy around creating a new planning and spending body,” says MACED president Justin Maxson. “What we don’t lack are ideas or projects. What we lack for is a process in our spending to do enough of the right things for long enough to get good results.”

However, it would take years to build up such a fund in Kentucky, and it would also take the will of political leaders in the General Assembly — whose state budget is seriously depleted — to make this possible.

“Whatever we do is going to be hard, slow and expensive,” says Maxson. “That is the reality. We have to take this opportunity and moment we’re in and aspire for what’s possible, then work like hell every day on really concrete things. We have to push our leaders to be ambitious, smart, accountable and do the right thing.”

While much consensus emerged at SOAR, some familiar tension remained under the surface. At one breakout session led by the politically powerful coal company owner Jim Booth — shortly after state Rep. John Short, D-Mallie, railed against the EPA — Nathan Hall, the reforestation coordinator of Green Forests Work, spoke about the possibility of renewable energy projects at old surface-mining sites. Hall, a Floyd County native who lived in Louisville before returning back home to work as an underground coal miner for a year, advocated moving past the old fights of “You’re either for coal or against us” and unifying for a common purpose. Half of the room burst into applause.

“I’m interested in working with people in Jim Booth’s position,” Hall tells LEO. “These are folks that have a lot of control of land in eastern Kentucky, and rather than pointing our finger at him as the bad guy we need to dethrone, I want to reach out to people like that and say there’s a lot of opportunities for this region that could involve surface-mined land.”

Booth was one of the speakers at an event held by Sen. Mitch McConnell in Pikeville just three days earlier that was the polar opposite of SOAR. Billed as a “listening session,” the event was chock full of finger-pointing at the EPA and “War on Coal” rhetoric from McConnell, Booth and every speaker. Though state Senate president Robert Stivers spoke of the need to put politics and partisanship aside at SOAR, at McConnell’s event, he joined others in making a decidedly partisan campaign pitch for McConnell against his Democratic Senate opponent, Alison Lundergan Grimes.

“You cannot go around saying you … are a friend of coal and keep company with (Senate Democratic leader) Harry Reid and Barack Obama,” said Stivers, directly mimicking McConnell’s campaign theme.

Near the end of SOAR, a few legislators from coal counties told the crowd they had no intention of giving up on a resurgence of the coal industry back into boom times. Rep. Keith Hall, D-Phelps, spoke of coal being converted to ethanol, while Sen. Brandon Smith, R-Hazard, trumpeted zero-emission “flameless coal” technology that is currently being used in a small pilot project in Alabama. Smith rejected the notion that market forces — such as the cheap price of natural gas and declining coal reserves — have a role in coal’s demise, telling LEO, “That’s an easy and convenient thing to say free-market forces are driving it, and it’s not true. If the EPA backed off,” then coal would rebound.

Dee Davis, the president of the Center for Rural Strategies and a longtime Whitesburg resident, tells LEO that eastern Kentucky is “going through a rhetorical transition, just in the same way that we’re going through a transition from coal. The ‘War on Coal’ stuff will quit resonating like it did, and we’re waiting for the next narrative to emerge and fill that vacuum.”

Davis was pleasantly surprised by the productiveness of SOAR and hopes Kentucky’s political leaders and members of SOAR’s continuing standing committee build on the promise of last week.

“I have confidence that if we don’t hold our leaders accountable, nothing much will happen,” says Davis. “The real challenge for local people who want to see a better future is getting engaged, not being misguided and articulating it in a way that the leaders understand this is the moment for them to really step up and do something right.”