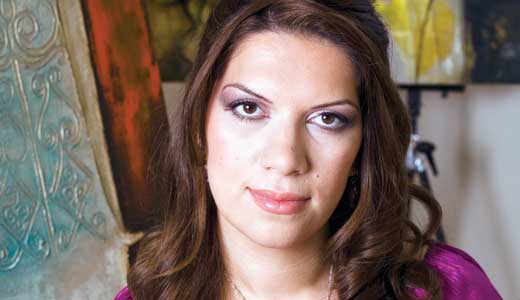 Iraqi-American artist Vian Sora was born and raised in Baghdad, living through the harsh dictatorship of Saddam Hussein and the chaotic aftermath of the American invasion of Iraq in 2003. She now lives with her husband in the relative tranquility of Louisville’s East End, continuing to create her internationally acclaimed paintings from her basement studio that often reflect her own difficult journey she and her family have endured.

Sora’s artwork is full of figures in transition between worlds old and new, chaotic and peaceful. She often draws on Iraq’s ancient culture that told history through murals and engravings, as hybrid animals or figures struggle to break free from chaos into a new land.

“When you look at some of my work, you can tell it is somebody who came from a different land and is transitioning to a whole new life here,” says Sora. “I am working actively into integrating my past into this life, but also creating awareness about people like me in Louisville, away from stereotypes, because I’m kind of sick of that.”

Her family was in the art business and she was mostly self-taught, avoiding the strict confines of Baghdad’s art academy. Sora’s family also tried to shield her from the oppression and war of the 1980s — her father was imprisoned and tortured by Hussein’s police — sending her to a more open Catholic school and often traveling to Europe.

Sora’s art career eventually took off, with exhibits throughout the Middle East, until the American invasion. She had planned on living in Turkey but moved back to Baghdad to work for the Associated Press during the chaotic violence of the occupation and resistance.

The AP sent Sora to London in 2005, where she met a lawyer from Louisville who she would eventually marry, a collector of her art. They lived in Turkey and Dubai as her art career continued to thrive, until moving to Louisville in 2010, where she now works in her husband’s law office.

While her family is currently spread out all over the world, with many still living in Iraq — she would love to go back and visit, but it’s still too dangerous — Sora says the Louisville community has embraced her with open arms. Among Louisvillians, Sora notes she can identify with not just some of the Catholic school educational experiences, but their common journey back to their roots.

“A lot of people who grow up in Louisville go to other cities and do great things, but they move back here because they are drawn home to their roots and do more great things,” she says.

Sora plans to have an exhibit in Germany this summer and is discussing the possibility of painting a large mural in Vicco, Ky., the small Appalachian town that made national news this year with its LGBT fairness ordinance and openly gay mayor — an area that seems a perfect fit for Sora’s themes of transition and breaking down stereotypes so people can discover the commonalities we all share across cultures.