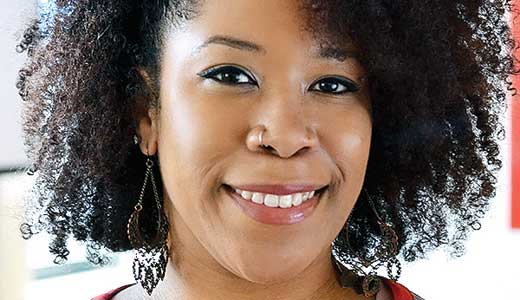 If you’re not one of the nearly 14,000 people following Tracy Clayton on your Twitter feed (@BrokeyMcPoverty), you’re missing out on some good laughs.

Clayton got the Buzzfeed job after many years of freelance writing, a brief stint at The Root earlier this year and a meteoric rise in 2013 on Twitter, where she chain-skewers everything from “Scandal” (“I hate that show, but I can’t not watch it, you know?”) to Paula Deen (Clayton undoubtedly stole the show on the viral #PaulasBestDishes hashtag this summer, with recipes including Strange Fruit Pies and Kale & Kabbage Kasserole).

Her work at Buzzfeed mirrors much of her Twitter arsenal opining on race, gender and pop culture, with listicles such as “12 (Black) Santas Who Disagree With Fox News’ Megyn Kelly,” “14 Times People Dressed as People of Other Races for Halloween and Managed Not To Be Offensive,” and “The Best Moments of (Toronto’s crack-smoking mayor) Rob Ford Dancing at a Black Church.”

“Working at Buzzfeed is fun and empowering, because everybody there is just so excited about what they’re doing and what you’re doing,” says Clayton, practically an elder stateswoman at 31 years old among the notoriously young Buzzfeed staff. “They encourage everybody to write about whatever they’re obsessed about. So I spend a lot of time writing about bad ’90s R&B and penguins.”

It’s true, including “22 Reasons Why Penguins Are Hands Down the Best Animals on Earth.”

After graduating from Male, Clayton left for college at Transylvania University in Lexington (battling the strange Confederate subculture there, unfortunately pre-Twitter) and spent four years living in Philadelphia before that familiar magnet brought her back home to Louisville and the small(er)-town Southern charm she had missed. However, Buzzfeed has convinced her to pick up stakes again and work in their New York office at some point next year.