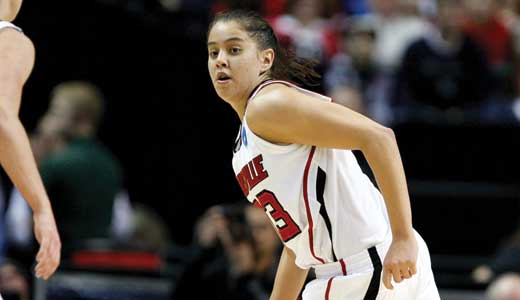 U of L Athletics

Shoni Schimmel is a beast on the court. She dominates from the three-point line, has no problem assisting (including using the occasional behind-the-back pass) and leads in overall scoring. Last Tuesday, when the Cardinals pummeled Ball State on their own turf in Muncie, Ind., Schimmel had scored 17 points, eight rebounds and seven assists in the first 27 minutes of the game. The No. 7-ranked Cardinals left the scoreboard at 105-67.

Schimmel, a senior guard for U of L’s Women’s Basketball, has had an equally interesting life off the court. She was featured in the 2011 documentary “Off the Rez” with her sister and fellow teammate, Jude, a junior guard with the Cardinals. The film depicted the girls’ life on a Native American reservation in Oregon and how their love of basketball led them to pursue their dreams.

“I think it showed just how normal our family was and just how much we enjoyed basketball,” Schimmel says of the Jonathan Hock-directed film. “Jonathan did a fantastic job.”

Putting her personal life aside, she prefers to keep the focus on the game and what this last year means to her. Schimmel graduates in May and plans to continue her passion with the WNBA. If you analyze her accolades from last season — a first team All Big East selection, named WBCA All-Region for Region 1, scored a career-high 38 points against the University of South Florida, and ranked seventh on the all-time scoring list with 1,511 career points — there’s no doubt she’ll make a smooth transition from college to pro ball.

Schimmel admits she’ll miss her teammates the most. “They’re like my second family,” she says. And how will Jude get along without her big sister? “I think Jude is going to do just fine — on and off the court,” she admits. “To be honest, I think she’ll enjoy it and be able to show what she is all about. That’s what she did in high school.”

The Schimmel sisters have what some consider a secret language when they’re on the court. It’s almost a telepathic communication — many times Shoni will shimmy the ball over to Jude as if she knows she’ll be there to take it and score. “It’s like she reads my mind,” Shoni says. “We always feed off each other, almost like we’ve played together for 10 years or something … which it’s pretty close to!”

And the downside of sharing the court with her sister? “When we play pickup and she guards me,” Shoni says. “She knows my every move.”

For now, Schimmel’s focus is on finishing out the final season and winning one game at a time. It’s most likely her last handful of months in Louisville, a city she felt accepted by and cheered on from the beginning. “Being in a college town, we get great support from everyone,” she says. “It’s a plus. The people here are so nice and caring.”