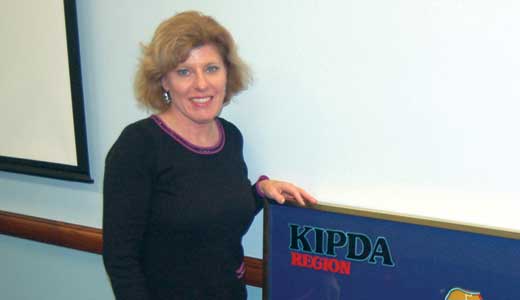 Since Oct. 1, almost 100,000 previously uninsured Kentuckians have been able to enroll in health insurance coverage through the state health benefits exchange, Kynect, in what is widely seen as a smooth-running national model for how the Affordable Care Act is supposed to work at the state level.

While credit goes to President Obama and congressional Democrats for passing the law, and Gov. Steve Beshear for choosing to create the exchange and expand Medicaid access, much of Kynect’s success has to do with the organization, planning and hard work of individuals at the ground level in Kentucky.

One of those individuals is Molly Dobson, the contracts and budget planner for the Kentuckiana Regional Planning & Development Agency (KIPDA), which was awarded the state contract to assist enrollment through Kynect in Jefferson County and 15 other counties in the region.

Dobson, who has worked for KIPDA in Louisville for more than 10 years, not only wrote the initial grant but also laid the groundwork for and manages its execution to make sure as many eligible Kentuckians in the region are enrolled as possible. This includes making sure that connectors (the staffers who assist individuals with enrollment) are trained, the metrics and reports are accurate, personal information is secure, outreach events run smoothly, and the public is sufficiently educated on their options. Dobson has also pitched in to help individuals complete their applications and enroll.

That job description isn’t just long — it’s not 9 to 5. Since KIPDA was awarded the contract on Aug. 15, Dobson has worked 60-hour weeks, including nights and weekends, traveling throughout 16 counties in the region to assist with many of their roughly 60 enrollment events.

“Personally, I’m proud to be a part of this initiative,” says Dobson. “In KIPDA, we come across persons daily who don’t have access to health insurance and are sick, and some are healthy and just hanging on, hoping they don’t become ill. The people we’ve met are so thankful, grateful and proud to gain coverage, and to me, it’s a right that everyone should have access to health care in our country.”

According to state figures, almost 25 percent of Kynect enrollees have come from KIPDA’s district, and 16 percent from Jefferson County alone.

Dobson modestly insists that their success has been a team effort among their dedicated staff working long hours, as well as the Lincoln Trail Area Development District and Family Health Centers, but KIPDA’s division of social services director Barbara Gordon tells us no one else has gone above and beyond like Dobson to make its mission a success in the region.

“We have a great team here, we really do,” says Dobson. “I’m grateful to have the opportunity to work in this and see how it’s working, especially in our state. And I’m proud of our state. I’m glad that we’ve moved forward and developed a system that works for Kentucky. And it is working. I think people will be well served.”