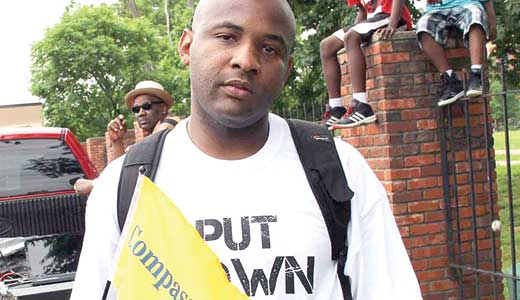 In 2004, when a detective was found not guilty of murder, manslaughter and reckless homicide after he shot and killed a 19-year-old black kid during an undercover drug bust, racial tensions were high in the city. Lavel D. White, a junior in high school at the time, went with others to the courthouse, ready to riot. Instead, he found Christopher 2X, a community activist, who convinced him this wasn’t the way to respond.

That’s when White started thinking about the world a little differently.

Growing up in Smoketown’s Sheppard Square housing project, he could have easily gone down the wrong path many times. Instead, he found community at the now-defunct Presbyterian Community Center. A counselor found him and exposed him to city officials and organizers. School officials gave him the benefit of the doubt when he screwed up. These mentors pushed White to do better — and he did.

He graduated from the University of Louisville, where he made “Young Black Voter,” a short film about his journey from disengaged youth to active citizen involved in politics and community. After a brief detour to Los Angeles, he wound up back in Louisville, working on documentaries and special video projects for nonprofits like the Network Center for Community Change.

Then, when White heard Sheppard Square would be razed as part of a Hope IV revitalization project, he knew what his next major project had to be about. For three years, he worked on the documentary, securing funds through a housing-department grant, researching the history of Smoketown, and interviewing twice the number of people he’d originally outlined.

“Brick and Mortar: The Sheppard Square Story” debuted at the PCC just days before it closed for good. More than 350 people showed up, including Metro Council members and former residents.

The response was greater than he’d expected, and it’s helped open doors to even more ambitious projects. He, 2X and Master P — yes, the rapper — have teamed up for a new documentary called “Cradle to the Streets” about violence and incarceration in the young black community. Fourth Street Live has provided the funding. It’s an unusual partnership that makes sense after White mentions he’s served on a panel the property had to try and fix its racial discrimination issues. (He also serves on a city panel that addresses violence among the African-American community.) Production is expected to begin next year and will include talking to inmates on death row, following young teenagers and discussing the role of rap music in glamorizing violence.

Even with Master P’s number on speed dial, White still finds his newest project surreal. He never imagined getting to work on a project so weighty and well connected. That makes it difficult for the 26-year-old to imagine or plan for where he might be in another five years. He says he plans on letting life unfold naturally. There’s no use in predicting the forecast.

All he knows is he’s got a lot of work to do before then.