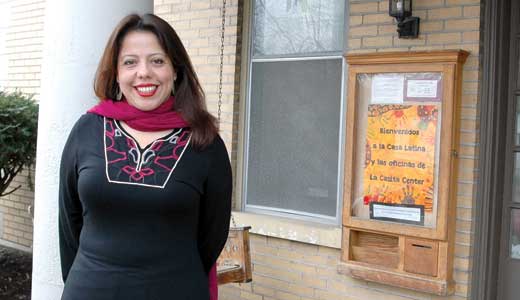 At La Casita, they try not to use words like “serve” and “help” to describe their interactions with the city’s Hispanic/Latino communities. Such words put too much focus on the privilege of those giving, and some people interpret them to mean handouts, which they don’t want to receive. That’s why director Karina Barillas chooses to say the nonprofit “accompanies people” during their personal journeys.

However you want to frame it, La Casita in Old Louisville is doing a lot of good for the community, and Karina Barillas is its unsung hero.

La Casita hosts a dozen women’s groups that focus on empowerment, violence prevention and communal support. Similar groups are held for men to explore the challenges and stereotypes faced by Latino men. The organization runs a food and clothing pantry — because talking about civic rights and responsibilities doesn’t get very far when one of the people talking is starving or freezing. Every Thursday night, La Casita holds a community potluck dinner at their big-sister organization, La Casa Latina, which operates a home for Latina women and their children and houses their one-room office. Then, there’s working with social-service providers to make sure they’re being welcoming toward ESL or immigrant communities. The nonprofit also recently secured a grant to partner with University of Louisville Pediatrics on a program for Latina women with disabled children.

All that is a lot of work for an organization that technically only has two part-time employees. Though she works at least 40 hours a week every week, Barillas is only paid for 25 hours, a testament to her devotion to the Louisville community. (The second employee, who helps keep things running at La Casa Latina, works and is paid for 20 hours a week.)

This is a cause Barillas knows well. Born and raised in Guatemala, she first immigrated to the United States to attend U of L on a Fulbright scholarship, where she earned a bachelor’s degree and later a master’s in counseling psychology. Unlike many of the people La Casita assists, Barillas knew how to read and write when she moved here, she was documented, and she had a built-in network through the university. Still, she felt the struggle of assimilating into the culture. She felt discrimination for the first time but learned how to confront it with compassion and use it to spark positive change.

Now, Barillas and La Casita volunteers go to the poorest apartment complexes with food and music — the great equalizers — in order to start conversations with Latinos/Hispanics. It’s through these informal chats that they hear about what the biggest needs are, and where they start to brainstorm ways they might be able to address it through their grassroots efforts and partnerships with other organizations.

Too many people they reach through these efforts weren’t previously aware of the resources available to them, perhaps because they don’t frequent the community center or churches that often act as hubs for them. To this end, La Casita is working toward fixing up an abandoned property adjacent to the La Casa Latina property. The new, spruced-up building would accommodate larger groups during events, house the food and clothing pantry, and be the entry point for people who just want to stop in and say hello.

How quickly this dream is realized depends on funding, which is always tight.

“We are a poor nonprofit,” concedes Barillas, “but we are always working at getting donors to fund out projects. We’re always working on connecting people. When you don’t have a connection to the place you live, it’s tough to keep it clean and make it the best place it can be.”