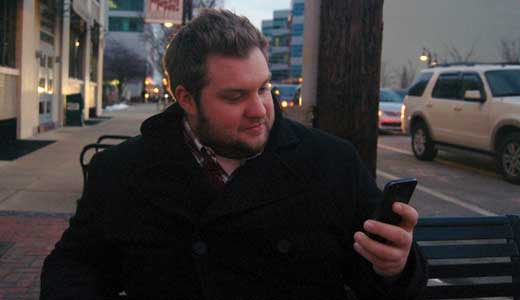 When his Texan friend seemed unenthused about Louisville after moving here, Jason W. Spencer campaigned for his hometown. The food scene! The history! The art! The museums! C’mon! What isn’t to love about Possibility City? Unfortunately, such arguments fell on deaf ears, leading the buddies to bicker about the superiority of their beloved locales. During one such debate, the Texan showed Spencer a popular Twitter account that lovingly roasted the land of longhorns and big hats. It’s name? @TexasHumor.

That’s when Spencer decided to create a local derivative: @LouisvilleHumor.

Almost two years later, the Twitter account has tweeted more than 11,000 times and amassed nearly 7,000 followers. (For comparison’s sake, that’s more than Insider Louisville has.) There are tweets about indecisive weather, bus crashes and feeling like you’re the only person in the city who didn’t attend the Justin Timberlake concert earlier this month. Largely, the content is G-rated, though the account hasn’t been without its share of PG-13 #TwitterDrama.

One involved a comment about not going west of Ninth Street, which incited calls about racism. Another was a quip about Louisville Sluggers being a preferred weapon of choice, which was nearly identical to a tweet another Louisvillian had posted earlier that day. (Spencer says he’d been sent the joke via text message and posted it without realizing where his friend had grabbed it.) Though he apologized and clarified the source of the joke, the incident left a bad taste in people’s mouths, resulting in haters Spencer still deals with today. In Twitterdom, this means he has arrived.

“I am learning as I go. I am in no means an expert,” he says. The incident taught him lessons about interacting with audiences, like how bold people can be when they’re behind a screen. “People need to remember there are people behind (an account). A 140-character statement is not a full story.”

At first, Spencer tweeted anonymously, but eventually word got around that he — a customer service representative with Humana — was the man behind the popular account. Luckily for him, the reveal came with unintended benefits. Shane Shaps of 520 East Brands hired him for freelance social media work, which helped him snag an internal transfer within Humana — to the company’s social media team.

“All this started as a joke. I didn’t see it as a career,” says Spencer. “I’ve always had a presence on social media, always had a personal account like everyone else, but the past two years, it has just exploded.”