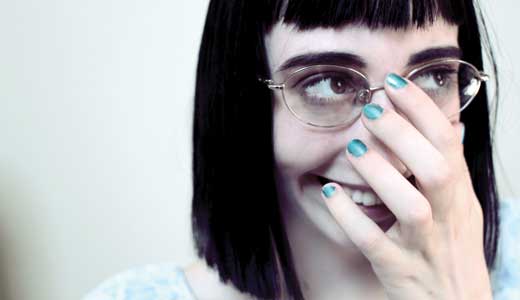 “I’m not really average,” acknowledges Franey Miller, the 18-year-old photographer. “I’m always working — whether it be planning shoots, getting up at 5 a.m. to call magazines in London, or doing all the bookings for every single shoot I produce.”

The recent high-school grad began shooting “with a fashion eye” at 15. She describes her work as “feminine, whimsical and soft but powerful.” Miller began by taking pictures of female friends. As she developed her skills, she found girls easier to use as subjects. “With male models, there’s this constant ‘manly’ vibe going on,” she says. “I’m not opposed to shooting guys, but I just feel more comfortable around girls.”

Some of her female subjects are shown wearing only lingerie; what might seem sketchy coming from a male perspective feels more loving and respectable coming from a young woman. Miller denies having an overt agenda.

“I find it pretty,” she shrugs. “I’m not really trying to subvert anything or make a statement — I just really like the visual of cute undergarments.”

Miller is not in school now, using her time to work on her budding career. “It is a lot of work,” she says, adding that her roommate, boyfriend and supportive mother are all “constant inspiration,” though it is her cats, Prudence and Tupac, who especially “work hard to make models feel at home during hair and makeup when I’m shooting in Louisville.”

She has published photos everywhere from the local zine Tobacco to the highly coveted Vogue Italia. Miller primarily uses social media and phones to make connections, and has recently spent time in the big city. “I have a serious love/hate relationship with New York,” she says. “I love it when I’m not in it.”

Miller feels lonely there now — after traveling alone, she tries to occupy herself with shoots and meetings, but unless a friend is available, she eats, gets around and then goes to sleep alone. Skype calls can only do so much. The city adds its own inspiration and, as one of the fashion and media capitals, it can’t be ignored, but it’s either too busy or too quiet. It’s not home yet.

“The last time I was in New York, I had 16 shoots in 14 days. It’s a lot of hard work, but I know it’s going to be so worth it one day,” says Miller. “I plan to relocate to New York sometime soon. It’s where everything happens, and it’s naturally where I need to be.”