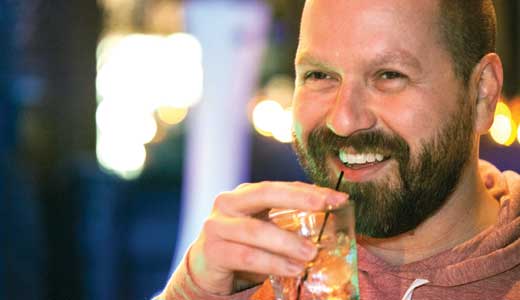 It all started with a “Boogie Nights”-themed birthday party. Daniel Cole enjoyed a night out, and throwing a big party sounded like fun. But Cole quickly realized he was also filling a need in Louisville’s social scene.

“I think it’s fair to say it was fairly risqué for the Fourth Street Live crowd at the time,” says Cole. “Male go-go dancers and dance music DJs were not really commonplace in that circle, especially not in 2007.”

The party was a success, and Cole credits veteran promoter Joey Wagner, then marketing director for Lucky Strike and Felt, for encouraging him. It led Cole to the Fourth Street Live club Hotel, where he was hired as their marketing and events director. “It was a great deal of work, changing the perception of Louisville nightlife,” says Cole, “but that was a great vehicle to do so.” Working with attractions from DJ Steve Aoki to fashion labels to curiosities like Paris Hilton, it was on trend with the MySpace/celeb culture of the time and taught Cole many valuable lessons.

“Of course, not every weekend was a giant event,” he acknowledges. “Many times, it was $100 of decorations from Caulfield’s and a motivated staff who liked throwing a theme party.”

After an LGBT networking group hosted a party there, Cole saw a window to expand the club, and the city’s options. “Hard Candy” was born this way there. When Hotel closed, Cole went out on his own as a freelance promoter. “It was quite an adjustment,” he says, as every dollar spent on an event was now coming from his own bank account.

Wagner offered to re-launch “Hard Candy” at the club he now runs, Prime Lounge. It took time to rebuild, but Cole says 2013 was one of his best years. Today “Hard Candy” is again on trend, bringing in many stars of the groundbreaking “RuPaul’s Drag Race” reality series as headliners. The event also expanded to Cincinnati and Lexington this year, with more planned.

Cole will also produce his first large-scale Derby event soon, a dream come true for him. He plans a party catered toward an audience wanting something other than a Maxim/Playboy-esque event at Derbytime.

Meanwhile, he still works part-time in retail management. “One month could be terrific and the next could be underwhelming. You plan and promote as best as you possibly can, but there are always factors you can’t predict.”