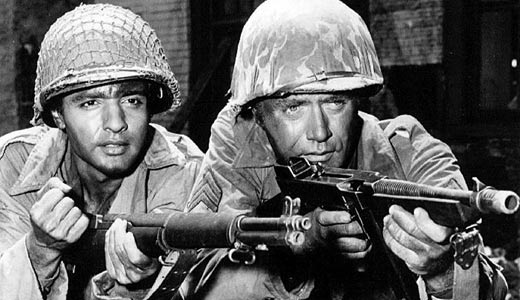 We’ve mentioned the single-season offerings of this groundbreaking b&w series all year, and now the complete set is here at a collectable price, just in time for Christmas. It’s a violent, unrepentant tale of American soldiers carving their way through Europe, knife-in-teeth, that would be right at home among today’s most popular cable series. Vic Morrow and Rick Jason star along with a who’s-who of great thesps including Claude Akins, Wayne “MASH” Rogers, Bill “The Incredible Hulk” Bixby, John Considine, Sal Mineo and Ted “Ted Knight” Baxter. Forty discs, more than 121 freakin’ HOURS of classic TV from the Golden Age — and we’re giving one away FREE! Just drop by videotapeworm.com/video.php and sign up to win one complete set from LEO, The Video TapeWorm and RLJ Entertainment. You’re welcome, Private.

We had real doubts going into the theater: Could Christopher “Dark Knight” Nolan and Zack “300” Snyder really create a good “Superman” franchise? With kinda bland Henry Cavill and Amy Adams as Kal El and Lois? We were won over by their central conceit: Superman is, first and foremost, an alien creature. He’s not the savior of all mankind; he’s just trying to understand his place in the universe. And he is no threat to us … provided we keep our distance. A wonderfully dark, lonely story with state-of-the-art special effects and a plot that — while comic-booky — doesn’t talk down to the viewer. Bottom line: One of our favorite films of 2013; a must-own.

This doc could shut down Sea World and its ilk forever. Killer whales are called that for a reason: At 6 tons, they must eat a lot of lesser creatures to survive. And given their astounding intelligence, it’s little wonder “accidents” keep happening in captivity. This is the story of Tilikum, a killer whale that has already killed three trainers. And, as the “property” of Sea World, it presents a paradox: Do they continue to show/train it? Do they destroy this very visible symbol of their company? Do they set it free? And what moral obligations do they have to the victims and their families? This doc is just like the whales themselves: beautiful, savage and damn smart.

IN SEARCH OF BLIND JOE DEATH: THE SAGA OF JOHN FAHEY

An unusual and highly entertaining biodoc on the life and influence of the late guitarist John Fahey, a profoundly influential musician and troublemaker who established the American Primitive Guitar style, made most famous by the work of The Who’s Pete Townsend and Chris Funk of The Decemberists. Livened by clever animation and scenes of nature at its best, Fahey’s life is revealed through his music and the living legacy of those he influenced. Sweet.

Martial-arts junkies recognize the name Yip Man as the real-life master of the Wing Chun art who openly taught this previously secret style in 1930s China. The fourth movie in the “Ip Man” series finds Yip (Donnie Yen) reluctantly participating in a tournament with a rival school, despite his vowed retirement. But the tourny proves to be a cover for actions of the evil Triad, threatening his life, his school and the very future of China. Good stuff.

Blonde hottie Julianne Hough plays “Lamb,” a virginal Christian in a small Montana town who suffers a near-fatal accident, resulting in a wad of insurance cash — and a checklist of worldly sins she intends to check out ASAP! Where to start? Why, Las Vegas, of course! That’s where she meets Russell Brand and Octavia Spencer, who help her find herself again (damn meddlers) in this unusual comedy that would have been so much better as an “R.”

Yes, it’s another one of those embarrassing and unredeemable early ’70s softcore wonders from Germany. This one features four tales of promiscuity, betrayal and wild barn-sex parties, culminating in a group of giggly “girls” giving 20-something Heidi the 18th birthday treat she’s always dreamed of: being locked in a bedroom with a school chum so she can lose her virginity. Playful Teutonic romps with huge-breasted blondes built to titillate and entertain.

A nicely subversive animated Christmas tale with voicework from Matthew Lillard, Sean Astin and Drake Bell. A pair of less-than-productive North Pole elves are given crappy jobs to do because they are such screw-ups — eventually shutting down Santa’s entire operation with a virulent round of food poisoning! On Christmas Eve! Not your usual bland seasonal treat: This one’s going in our stocking.

Dreamworks Animation probably won’t see a long-running franchise à la “Madagascar” from this tale of a snail who develops super-speed and dreams of racing against Indy cars, but as a one-shot character, it is perfect viewing for your basic hyperactive rugrat. There’s even a moral: “No one succeeds on their own, no matter how great they are,” teaching kids the importance of friendship. Won’t change your life or anything, but a colorful, lively, upbeat kid’s tale with voice work by Ryan Reynolds, Paul Giamatti and Samuel L. Jackson.

This low-rent compilation of ’70s action flicks contains a lot of entertainment for the dollar. You’ll howl at Gary Busey’s crazy best in “Bulletproof,” then prowl mean streets as backwoods resident Jim “Thunder Road” Mitchum looks for his runaway sister in L.A. (aided by Erik Estrada, Anne Archer and our favorite “Coach,” Cathy Lee Crosby). “Scortchy” is a lame Connie Stevens toss-off, but “Bamboo Gods and Iron Men” is something of a lost Filipino gem/turd about baddies chasing down newlywed boxing champ James Iglehart and bride Shirley Washington over a Buddha statue. Our kinda crap.

Dolph Lundgren plays an agent searching for drug kingpin Vinnie Jones in L.A. Actually, these two largely set up the action, the real stars are Carly Pope (“Elysium”) and wrassler Randy Couture, who plays a dirty cop in this low-rent actioner that’s also known as “Rush” and “Hard Rush.” A solid, entertaining little grunt-and-shoot with a bit of skin; the rain-soaked climactic battle between Couture and Lundgren is worth the price of admission. We liked it.

This low-rent horror (with some not-always-intentional humor) about adult sibs coming together to battle their resurrected, super-strict parents is a hoot. The ’rents have always had this “thing” about the kids being in bed by dark, going so far as to bury 10-year-old Amelia alive for breaking curfew! Horro-vet Debbie Rochon plays the mom, with the remainder of the cast headlined by Deneen Melody (TV’s “Playboy Club”) and scream-queen-in-training Raine Brown from “Kung Fu and Titties” (2013; a guilty pleasure of ours). Check it out.

What can we say that hasn’t been said before, other than, “Dexter, you shall be missed.” In this eighth and final season, our heroic, emotionless and wildly likeable serial killer suffers that most painful of injuries: Writers who have run out of ideas. OK, so it’s not the best season of the series, but it does come to a slam-bang finish with Dexter finally accepting that his actions have hurt or killed everyone he’s ever loved. Meanwhile, outside, a hurricane beats down on Miami, making escape impossible — just as he learns that Deb has been shot! You know you want it.

RISE OF THE GUARDIANS: HOLIDAY EDITION

This holiday offering got a lot of flack from critics because it wasn’t the usual syrupy-drippy hippity-hop through worn-out ghosts of Christmas-tales past. Instead we get a feisty set of heroes who just happen to be Jack Frost (voice of Chris Pine), Santa (Alec Baldwin), the tooth fairy (Isla Fisher) and the Easter Bunny (Hugh Jackman, nearly unintelligentable). They band together to thwart the plans of Pitch (Jude Law) an evil spirit out to steal the imagination of the world’s children. It’s an original, action-filled animated adventure with lots of sly in-gags for the adults, now available in several Holiday Editions that include clever windup toys from the film.

Back in TV’s Golden Age, it was guaranteed that your favorite show would have a Christmas episode. The Carol Burnett show — arguably the greatest musical variety show of all time — had two such outings: 1974 and 1977. The first featured “Mama’s Family,” with Carol as Eunice, entertaining younger sib Alan Alda, who is down on his luck, working as a department store Santa. The second one is even better, with Carol as Mrs. Wiggins, secretary to Tim Conway’s Mr. Tudball. The two share champagne and a mistletoe kiss — just as his wife, Vicki Lawrence, walks in! There’s also a collection of seasonal skits with guest stars like Sid Caesar and Jonathan Winters. Start a new tradition.

This nearly three-hour biodrama documents the founding of Islam — an event of which Americans seem woefully ignorant. Mohammed (never shown, of course) receives the Koran from the angel Gabriel, sending him on a mission to reform unjust rulers in 7th century Mecca — and to worship only “the one God.” He does this by gathering together an army of inexperienced men, leading them to victory over crack Muslim soldiers at the wells of Badr. Stars Anthony Quinn, Irene Papas and Michael Ansara.

THE PARADISE: SEASON ONE

This BBC series tells the tale of Britain’s first-ever (wait for it) department store! Woo-woo! We’re being facetious, of course; it’s entertaining as hell when simple clerk Denise (winsome blonde Joanna Vanderham) is swept up in the machinations of her hunky force-of-nature boss and store owner John Moray (rascally Emun Elliott). But the real story is her — and the Western World’s — first infatuation with modern consumerism. Nicely sexy and wildly romantic with dark secrets to be shared, yet light as a spring rain. Not to be missed.

An insightful, lovely, joyous and heartbreaking doc about a group of young girls from all parts of the globe, each dreaming of becoming a professional dancer. But to do so they must leave their homes, parents, siblings and friends behind — probably forever. The story is told by the children themselves, with the pain and hope shining through their eyes as they struggle, physically and emotionally, to reach for the stars. Breathtaking.