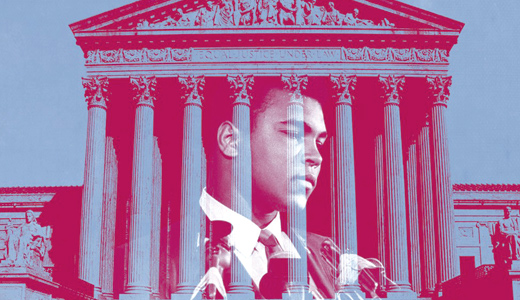 A dramatization of Ali’s Supreme Court battle after refusing to join the Army, claiming conscientious objector status to the Vietnam War. He was ultimately convicted of draft evasion, stripped of his boxing title and banned from the sport … but the tale didn’t end there. Masterful real-life storytelling with Frank Langella, Danny Glover, Barry Levinson and Ed Begley Jr. as justices, along with archive footage of Ali, Woody Allen and Diane Keaton. And you can win your copy FREE courtesy of HBO, LEO and the Video TapeWorm! Just visit videotapeworm.com/video.php to register for one of five free copies. You’re welcome.

THE TWILIGHT ZONE: THE COMPLETE SERIES

Make no mistake: This is the outstanding, groundbreaking original series, hosted by and largely written by Rod Serling, in its complete 156-episode b&w glory. There have been other collections before, but this one is the best. Why? Simple: It contains ONLY the shows, each remastered from HD sources and well-packed in five bookcase-style binders, all in a cardboard overcase. No expensive and unnecessary “bonuses,” no boring commentaries and no superfluous packaging. It will sit proudly on your video shelf, ready for you to enjoy more than 75 freakin’ hours of perfect television — at about 75 cents an episode! A must-own.

A thinly veiled excuse to hand Denzel Washington and Mark Wahlberg firearms and let them riff off each other for 109 minutes. It’s awesome! There’s some sort of generic action/crime plot involving Mexican drugs and undercover hijinks, but all that is just window dressing as the two “reluctantly” join forces in order to survive. Near-constant shootings, explosions, car crashes and chases give the two leads plenty of opportunity to bounce screwy lines off each other. What more could you possibly want in a movie? Buy it.

NIGHT OF THE COMET

One of our favorite ’80s movies, now on Blu-ray. Earthlings drunkenly celebrate being in the tale of a comet, only to wake up the next morning either a pile of dust or a zombie. Don’t you hate it when that happens? The two exceptions seem to be a pair of vapid Valley Girl sisters, Catherine Mary Stewart and little Kelli Maroney, who see the calamity as a good excuse to hit the mall. And, no, we’re not making this up. Damn-good silly sci-fi with Mary Woronov as a crazed scientist, Robert Beltran as an Erik Estrada look-alike, and our all-time favorite actor, Geoffrey Lewis. Enjoy.

The first of a tidal wave of docs commemorating the 50th anniversary of the JFK assassination, this one a bit more fact-driven than most thanks to the Smithsonian Channel. We’ve been wading through piles of these things for the past few weeks, and this one is head-and-shoulders the best. Straight forward, factual, a solid journalistic analysis designed to inform the viewer of the facts, the players, the day, its immediate aftermath, and how America was forever changed. Recommended.

Aubrey “Parks and Rec” Plaza is absolutely smokin’ in this fun, raunchy ode to getting the hell out of high school. She’s a formerly bookish teen, still a virgin, about to head to college, who makes a checklist of every debauched social and sexual misadventure she’s missed out on while hittin’ the books. But this isn’t your basic “American Pie” sex-fantasy (damn!): The script is funny, intelligent, irreverent and clever. With drop-dead gorgeous Rachel Bilson as her party-girl sister, plus Scott Porter, Johnny Simmons, Bill Hader, Andy Samberg, Connie Britton and Clark “Agent Coulson” Gregg. We liked it.

Simon Pegg and Nick Frost — do we really need to go on?! — make apocalyptic magic once again, gathering together three other childhood mates to attempt an epic pub crawl, despite the hastening decrepitude of their aging bodies. Oh yeah: The name of the final pub is “The World’s End.” And, uh, while they’re at it … the world comes to an end. This perfect conclusion to the Three Flavours Cornetto Trilogy (“Shaun of the Dead,” “Hot Fuzz”) may be the best of the bunch, with sly digs on Dr. Who, “Invasion of the Body Snatchers” and “Hitchhiker’s Guide” — topped off by an hilarious and chilling cameo by Pierce Brosnan. A must-own.

One of the better raunchy comedies of late, thanks in no small part to a cast that includes Jennifer Aniston (in her undies), Will Poulter (with a spider in his pants) and Emma Roberts (pierced and deadly). They pretend to be the perfect all-American family for brainless pot-smuggler Jason Sudeikus, traveling to Mexico to bring back tons of weed in an RV for psychopathic druggie Ed Helms. Doesn’t pretend to be any more than just plain, simple — and damn funny — pratfalls, skewerings and other nicely R-rated mayhem. Embrace it.

Paul Giamatti and Paul Rudd are sub-genious NY-ers trying to make a rare legal buck selling Christmas trees. They stick together, despite that fact that Rudd is planning to marry Giamatti’s ex-wife (Amy Landecker). The movie’s name may seem ironic as the two losers find their get-rich-quick scheme swirling the bowl, but with the people involved, how could this not be something special?

AND WHILE WE WERE HERE

Right up front: We are in love with Kate Bosworth. When she calls, we are outta here! But right now she’s busy promoting this flick about a wife falling to the charms of a younger man while reading her grandmother’s memoirs (voiced by Claire Bloom) and taking long walks through a romantic island town. OK, so it’s just a big-ol’ chick flick — she still looks downright edible.

This is essentially Hitchcock’s “Strangers on a Train” with a hot lesbian twist and great boobs. Stunning Agnes Bruckner is accosted by nutjob Madeline “Californication” Zima into a hearing her crazed plot: They will kill each other’s enemies and no one can connect them to the victims. The nutjob does it, the stunner doesn’t, and now Agnes is framed for murder. The ensuing chaos, with the girls each trying to seduce/expose the other with the police just a step behind is extremely entertaining. Recommended.

DANGER IN THE MANGER

A silly Christmas outing set in an elementary school, led by the always amazing David “Dr. Who” Tennant. Like its predecessor, 2009’s “Nativity” (highly recommended), this is a heartwarming family tale with Tennant trying to muster the kids together — a task once described as “herding deaf cats” — to put on a competitive nativity play. Then his assistant (Marc Wootton) tells everyone that the teacher’s Hollywood-producer girlfriend intends to make a movie of it, when the truth is that they haven’t spoken in months. And the kid’s can’t sing. And all their parents are nuts! Lots of fun.

Fans of ’80s cable will remember this animated Showtime offering, cobbled together from the Japanese “Wakusei robo Dangard A” giant-robot series created by Leiji Matsumoto and Dan Kobayashi. This release contains three full-length movies, 5½ half hours on two discs edited from the original series with all new English voicework. Enjoy.

Nordic babe Renée Soutendijk stars as both a super-model super-android with a nuclear bomb in her chest (wink, wink) and the scientist who created her in this infamous actioner, now on Blu-ray. Gregory Hines pulls Wesley Snipes-duty as the terrorism expert charged with bringing the robo-bitch down, but frankly, he isn’t having a whole lotta luck as she strolls through the city dismembering anyone or anything that she perceives as a threat. Not the best actioner of the ’90s, but nice couch-fodder, now on Blu-ray.

It’s a good, old-fashioned silly-assed monster movie! A squiddy-looking something is hauled up in a lobster trap at a picturesque Irish tourist island where nothing much ever happens. Before long, the island is overrun by the toothy little buggers — and it’s 20-foot-tall “mum”! — who are noshing their way through the local populace! Oy, what’s doomed sot, a true son o’ th’ Emerald Isle to do? Why, go to the pub, of course! Especially once they discover that the squiddies canno’ eat ye if you’ve got a snoot-full! Damn silly, with a nearly unintelligible brogue and no tits, but a must-see nonetheless. Our highest recommendation.

REMINGTON AND THE CURSE OF THE ZOMBADINGS

This screwy no-budgeter from the Philippines mixes zombies — flashy, prancing gay zombies — with coming-of-age themes, Japanese-style horror, graveyard-at-midnight desecrations and teen lust into some completely unique and very entertaining. Boy loves girl. Girl thinks he’s a slob. Slob starts to become neater and more sensitive … Too neat and sensitive. Girls starts to like sensitive guy. But debts are due, so undead rotters come dancing in. Hard to describe but delicious.

Forest Whitaker narrates this exceptional doc on American cycling superstar Jonathan Jock Boyer, who dropped out of competition in 2007 to coach the first Rwandan National Cycling Team, bound for the Olympics just six years away.