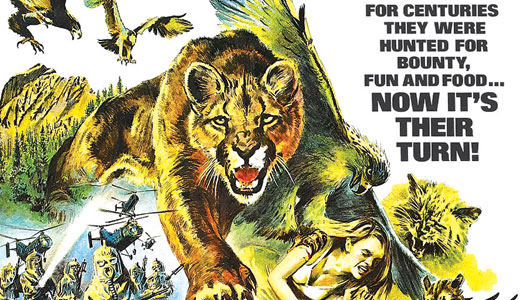 DAY OF THE ANIMALS

Louisville’s second-most-famous film director, William Girdler (“Abby,” “Grizzly,” “The Manitou”), created this mistreated ’70s eco-paranoia time capsule starring a who’s who of Hollywood hams at the peak of their salty goodness. Leslie “Airplane” Nielsen, Richard “Grizzly” Jaeckel, Lynda Day “Pieces” George, husband Christopher “Mortuary” George and others find themselves alone and defenseless, high up a mountain when pollution triggers a critter war on humanity! Best of all, it’s been remastered and is finally available in its original widescreen format and on Blu-ray. What a time to be alive.

Here’s an old guilty pleasure of ours, finally available on Blu-ray. Between making “Dawn of the Dead” and “Creepshow,” George Romero dreamed up this modern-day Arthurian drama starring Ed Harris, soaper Gary Lahti and makeup man Tom Savini. They are part of a gypsy Renaissance Faire, traveling the country as a close-knit family — a family with a strict code of knightly conduct. In armor. Battling with deadly medieval weapons. On motorcycles. And all is well until the national press makes them famous, threatening Harris’ harmonious kingdom. The stunts are truly brutal; watch for Stephen King in a cameo.

David Suchet’s fussy, arrogant Belgian super-detective is in top form in these four feature-length mysteries, presented in their original UK broadcast order (for some reason, the U.S. schedule is always different). Our favorite this season is “Mystery of the Blue Train,” a classic throwback to the days of genteel Euro travel and dark dealings aboard a moving train. You’ll swear you can actually smell the lacquered wood paneling, coal smoke and oily rails as Poirot searches for a priceless jewel and a brutal killer. As good as TV could ever be.

This no-budget comic killer-vendetta between a pair of department-store santas is bloody, old-fashioned indie crap (which we always enjoy), but what makes it memorable is the guest list, with at least a half-dozen low-rent horro-vets passing through, including Linnea Quigley, Brinke Stevens, Lloyd Kaufman and Joe Estevez. Our kinda X-mas flick.

Ashton Kutcher reminds us what a damn good actor he can be in this solid, if poorly received biopic on the charismatic founder of Apple Computers. But this isn’t a shining celebration of a life well-lived as much as a look into a man with many demons — a dark, driven, flawed genius who literally created the modern computer industry, then turned it on its ear. Think what you will about Jobs — or Kutcher — the movie is riveting: neither worshiping Jobs nor vilifying him, managing to both educate and entertain. The guy also seemed to have been a babe-magnet, but that might just be Kutcher. Worth your time.

Once again we point it out: Limey detective shows are simply the best. Yannick Bisson returns as Det. Murdoch, a bright and energetic man of the 1890s, with the mind of a scientist and a fondness for then-new techniques of forensic analysis — putting him at odds with the local police, who solve crimes by the cudgel. Our favorite story this season involves Murdoch’s old chum, Winston Churchill, who awakes after a night of drunken debauch, unable to remember the murder of his drinking partner, who was run through with a sword. Very addictive, colorful and often highlighted with a spot of bare bottoms.

The oldsters are back at it again! Bruce Willis returns as retired super-spy Frank Moses, bringing all his friends along for the ride. And with friends like John Malkovich, Mary-Louise Parker, Helen Mirren, Brian Cox, Anthony Hopkins and Catherine Zeta-Jones, how can you go wrong? This time a nuclear bomb goes missing, putting an army of frenetic assassins, crazed terrorists and brainless, power-hungry politicians in their path. A bit more lighthearted and safe than their first outing, but never less than an absolute joy.

This instantly infamous bit of trash is notorious thanks to the presence of Lindsay Lohan, who flops ’um out for both boyfriend James Deen and secret squeeze Nolan Funk. Yeah, there’s some kind of L.A. movie-making head-game plot afoot from director Paul Schrader (writer of “Taxi Driver”), but you can’t help but think: “What a good actress Lohan could be if she wasn’t high, naked or driving — usually at the same time.” Not that we’d want her to stop, of course. Entertainingly bad, with limp, bare penises.

We’ve mentioned Yip Man in these pages before, the martial arts master who first taught secret techniques and mentored a young Bruce Lee. Here director Kar Wai Wong leads Tony Leung in a wild, epic actioner based on his life at the end of China’s dynastic age, with the country in lawless chaotic revolt. The cast list is a who’s who of great Chinese actors, including massive Cung Le (“The Man with the Iron Fists”), Qingxiang Wang (“Red Cliff”), Elvis Tsui and lovely/deadly Hye-kyo Song. Recommended.

This eight-episode dramatic series from Sweden is a PhD course in how to write for the screen. It follows a family for five generations, beginning with a violent rape in May of 1945, just as the Nazis are defeated. A child is born, the woman marries and another child arrives several years later. Like all of Europe, the family is fractured, with old wounds keeping them apart. Now a man, the first child is reported to have died while searching for his father; the second becomes a writer. But in 1990, as the Berlin Wall falls, long-held secrets spill out, sending the writer on a quest that will change his life forever. A brilliant allegory of 20th-century history unlike anything you’ve ever seen.

Man, what a great cop drama! A pair of sometimes-partners in Le Havre — one rigid, by-the-book and procedure-obsessed, the other a man who relies on his gut and life-long friendships — deal with truly grisly murders, usually of innocents caught in the gears of an escalating crime war. And their differences mesh perfectly, making them unstoppable in this very dark, brutal French series based on the works of Graham Hurley. Four 90-minute episodes that will leave you breathless.

DOCTOR WHO, STORY 29: THE TENTH PLANET

This 1966 four-parter witnesses William Hartnell’s final battle with the newly redesigned Cybermen in an arctic outpost. Never before seen on home video, it includes the Doctor’s first-ever “regeneration.” Irritable, irascible — frankly, a stubborn asshole at times — Hartnell’s Doctor is a far cry from the Doctor of today as he and his companion Polly battle both his ancient foe and stupid earthlings about to ignite a world-shattering Z Bomb! This is one of the very best from the Hartnell years, with Episode 4 here recreated in animated form using source material from the day, the original having been lost from the BBC archives long ago. A must-own for any Whovian.

A young police detective puts his life on the line solving cases in Sydney, Australia. But he faces fear, mistrust and abuse at every turn because he is — dun dun DUNNN — Muslim. This series really resonates, since Oz’s multi-cultural history is so similar to our own, and lead Don Hany is a truly gifted actor, fully believable as a man who would love to share the tenants of his quiet faith with those around him, but recent world history makes that impossible. Season 3 features a novel plot: a bloody robbery may be the work of Iraq/Afgani-war veterans, which he cannot investigate without attracting a lightning storm of prejudice.

Here’s all you need to know: Ethan Hawke in a Ford Shelby GT500 Super Snake Mustang with (sigh) Selena Gomez. His wife has been abducted by a mysterious voice (Jon Voight), so Hawke commandeers Gomez’s car for a high-speed thrill ride through the streets of Sophia, Bulgaria. Yeah, been there, seen that — frenetic editing, loud music, adrenalin running down your pants leg — but as far as we’re concerned, the world stopped turning once Gomez was in the passenger seat. Damn, she’s hot! Just as stupid as it sounds, and just as entertaining.

Having spent many cold, sleepless (read: drunken) nights in supposedly “haunted” places ourselves, we are satisfied that there are no such things as spirits. That being said, it’s still a bunch o’ goofy fun to go look! That’s what keeps us watching dumb crap like this spin-off of the popular “Ghost Hunters” series. Unfortunately, this is the end of the line for Barry, Paul, curvy Kris and the gang, as they explore Euro castles and Mayan ruins. Let’s hope they use this time off to reflect — and finally learn how to read an IR scanner properly!

This thing flew under most viewers’ radar because it premiered on the little-known TruTV Channel. Largely inspired by MTV’s “Punk’d,” a quartet of (sorta) best friends — Q, Sal, Joe and Murr — who have, admittedly, the broadest, wildest, most imaginative and maybe even sickest senses of humor on the planet, dare each other to say or do whatever they are told in public while hidden cameras roll. Completely unredeemable (and at times unrepeatable), but funny.

A quartet of middle-aged gay men in West Hollywood (or is that redundant?) discuss the vagaries of life while drinking mimosas and talking way too loud at stylish restaurants. Wait a minute … wasn’t that the plot of “Sex and the City”? Yeah, kinda, but frankly this web series is far more entertaining.

PLEASE KILL MR. KNOW IT ALL

Skinny-hot Lara Jean Chorostecki of “Copper” and “Hannibal” stars as the author of a help column in her local newspaper (been there). When she is required to present a headshot for publicity, she sketches out a drawing of a random man … Who turns out to be a hired killer! And he’s not happy about it! And neither is his boss, since he is now exposed! She quickly finds herself in the crosshairs, so she arranges to meet the hitman … and they fall in love. Surely by now you can tell this is not to be taken seriously: A nutty crime/romance action flick with lots of pretty people. Fun.

Sometimes known as “House 3,” this is a solid if not terribly original ’80s chestnut from Sean S. Cunningham (“Friday the 13th”). Cop Lance Henriksen watches “Meat Cleaver Max” (Brion “Blade Runner” James) fry in the electric chair, only to discover that this has freed him to continue killing, now in the form of a supercharged lightning bolt infesting Henriksen’s house, threatening his family. And what a family! Check out Aron “ST:DS9” Eisenberg, Dedee “Michelle’s Sister” Pfeiffer and Rita “Mulholland Drive” Taggart as they run from exploding toasters and such. Our kinda flick.

The long-delayed release of Shirin Neshat’s award-winning Farsi-language drama about four women whose different — if all abusive — paths through life bring them together unexpectedly at a rural estate in 1953. While the world watches the country’s democratically elected government being overthrown (with help from the CIA), they come together as symbolic flowers, blossoming together, each learning to be independent with help from the others. Contains some of the most incredible screen imagery we’ve ever seen; worth your time.