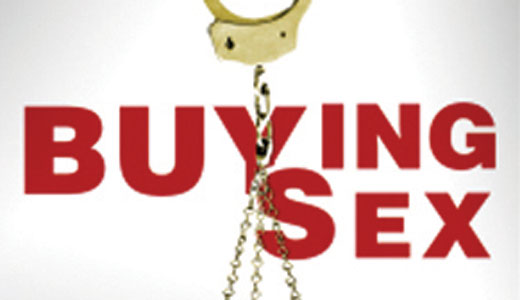 You may be surprised to know that prostitution is legal in Canada — but any form of advertising for it is not, nor are brothels or pimping. This doc looks at the confusion and contentiousness that has arisen as the country considers an overhaul of these laws. Some people want it completely decriminalized, pointing out that prostitution has always been a part of Canadian culture — some of its pioneer mothers were hookers! — and keeping it legal has helped keep crime and disease in check. Others see it as exploitive for the participants and demeaning to the country. An unbiased look at the men and women who buy and sell sex, giving them an opportunity to provide us with their own well-informed, if rarely heard, opinions.

Big-eyed, fragile-looking Rosie Day plays a deaf mute in this truly horrifying film inspired by real events. After her family is murdered, she is forced to care for a collection of young girls rounded up by the military to be sex slaves. But her tiny frame lets her slip unnoticed through the walls of the brothel, and when she spies the man who murdered her family, she devises a ruthless — and damn clever — plan for revenge and escape. But this is not some mindless ode to violence and perversity: You will be truly surprised at the level of humanity, originality and tenderness within, which makes the conclusion all the more shocking.

ALL THE BOYS LOVE MANDY LANE

Drop-dead gorgeous Amber Heard was 20 when she played the titular 16-year-old virgin at the heart of this slasher flick. A cautious recluse, she agrees to join some new friends at a party in honor of a classmate who had died at the last party. Sounds like a good idea to us! With no adults for miles, the guys let hormones, alcohol and drugs loosen their inhibitions, setting Amber on the run. Then someone notices that a few of the partiers have gone missing. OK, this is pretty bad — it sat on a shelf for seven years before being released — but no worse than anything churned out in the ’80s. Enjoy.

The terrific true tale of Freda Kelly, a shy teen in Liverpool who once got a part-time job working for some local bar band, one of the thousands of angry flash-and-gone rockers of the day. Maybe you’ve heard of them, they were called The Beatles! She remained their assistant, best friend, confidante and moral touchstone for nearly a half-century. This doc, culled from her private stash of memorabilia plus candid conversations with John, Paul, George, Ringo and all their friends, is the most intimate look at the lads from their humble, violent beginnings through their magical career and into the present. Be witness to 50 years of Beatlemania as it has never been seen. Our highest recommendation.

Of all the MST3K offerings over the years, this may be the best. The movies? “Moon Zero Two” (a 1969 space-crime howler with Bond-girl Catherine Schell), “The Day the Earth Froze” (aka 1959’s “Magic Voyage of Sinbad”), the 1960 classic “Leech Woman” and the Limey “Godzilla” wannabe, “Gorgo.” A terrific lineup, to be sure, but it also contains a bonus disc with both “Mitchell” and “The Brain That Wouldn’t Die” — two of the very best entries of the entire series! Then they wrapped it all in a beautiful tin box with lots of bonus goodies. An absolute must-own.

THE MORTAL INSTRUMENTS: CITY OF BONES

Lily Collins stars in this dark adventure, the first in a planned franchise that lies somewhere between TV’s “Supernatural” and “Buffy The Vampire Slayer.” It’s clobberin’ time when she discovers that she’s part of an army of half-angel warriors protecting mankind from an underworld of demons, warlocks, vampires, werewolves and life-insurance salesmen, many of them in an alternate zip code below NYC. Based on the wildly popular young-adult books of Cassandra Clare, it co-stars Lena Headey as Collins’ mother, plus Robert Sheehan, Jamie Campbell “Twilight Saga” Bower and Jonathan Rhys Meyers.

The X-Men’s Wolverine character is immortal, making it easy to bounce around in time for great stories. This one stretches from the bombing of Nagasaki to the present day, with razor-clawed Hugh Jackman rescuing one of his Japanese captors. That man later becomes a powerful businessman who offers Wolfy the thing he desires most: mortality. But it turns out to be a double-cross. Top-notch filmmaking (if on a somewhat smaller scale than past efforts), taken to the next level with help from Rila Fukushima, whose mini-skirted Ninja “Yukio” stole every scene she was in. Would love to see her in her own movie. A must-own.

One of those Dove-approved sugary sweet outings wherein a bland suburban family has their world turned upside down by adversity, everyone learns a lesson, and then goes to church. In this case, Dad gets fired, but his Brady Bunch keep consuming until they find themselves homeless. Then a miracle arrives in the form of a Christmas tree farmer. Watch for Jill Whelan, the former kid from “Love Boat,” who specializes in these sort of movies these days.

Any movie that combines Olivia Wilde and a brewery is aces in our book. That’s where she works along with her best friend, Jake Johnson. Jake is happy with his sweet petite fiancée, Anna Kendrick, and Olivia is faithful to boyfriend Ron Livingston. Then the two of them spend a weekend drinking beer. Lots of beer. And she gets topless on the beach. But this is not really a rom-com, more of an indie slice-of-real-life with incredibly beautiful people in their old clothes.

A welcome Blu-ray release of one of the best kid/family movies ever made. Danny DeVito, Rhea Perlman, Embeth Davidtz and Pam Ferris play the adults to little Mara Wilson’s winsome, super-smart kid in this admittedly dark and scary Raold Dahl tale. Her parents are morons, her teachers are sadistic and the other kids suffer the abuse of brutal bullies — until she teaches herself to read! Then, with the help of a great librarian, she becomes a quick-witted playground savior. Now with hours of great bonus goodies.

Now this is how you make a documentary! You’ve all seen the photo: a group of men of obviously differing ethnic backgrounds, eating lunch high amid the girders of a rising skyscraper (actually, NY’s Rockefeller Center), completely obvious to the height, lost in their comradery. This is a search for those 11 men, bound by fate during the Great Depression to be immortalized as the perfect symbols of America doing what it does best. Simply wonderful; our highest recommendation.

The best thing about this biodoc on Robert Mann, the groundbreaking founder and first violinist of the Juilliard String Quartet — other than 50 years of absolutely breathtaking performances — is the intimate look into the little-known world of the chamber musician. Chamber music, more than any other, has a distinct personality, a product of the individuals involved; simply put: alone each is a master, together they become a single otherworldly presence. And Mann is the undisputed master of this art. If you like good music, you will love this.

In a world where the phrase “gay marriage” no longer causes bigots to spew, two men plan their storybook nuptials amid all the family-and-friend conflicts that have infested non-gay wedding movies for 100 years. Frankly, wedding movies give us the heebie-jeebies, but it was refreshing to see a romantic/comic tear-jerking slice of life that simply lets people be people and movies be entertainment. With a great cast that includes Eric Aragon, Jason T. Gaffney, James “Independence Day” Rebhorn and Kristine “TV’s Buffy” Sutherland.

The long overdue Blu-ray release of, for our money, the best British rock mockumentary ever made. First released as “The Rutles: All You Need Is Cash,” this is a loving, razor-sharp spoof of all the turgid hype known as Beatlemania, with Eric Idle, John Halsey, Neil Innes and Ricky Fataar as the “Pre-Fab Four,” suffering through comic bits by Michael Palin, George Harrison, Mick and Bianca Jagger, Paul Simon, Ron Wood, and SNL’s Belushi, Akroyd, Radner and Murray. What? You still want more?! OK, they also throw in the hysterical follow-up, “Can’t Buy Me Lunch,” plus loads of great bonus goodies. A steal at this price.

More entertaining gricer(*) nonsense from that little blue engine and his chug-chugging pals. There’s no particular theme this time out, though responsibility, friendship and loving what you do seem to be prevalent. Five adventures on one disc; the best of the bunch finds Thomas taking a dare from Paxton that puts him in danger — and puts Paxton on a frantic course to prevent a catastrophe. (*A gricer is person obsessed with British railway. For extra credit, watch “Trainspotting.”)

The conclusion to “Transformers Prime: Beast Hunters” finds the humans and Autobots separated, their headquarters in ruins and their leader, Optimus Prime, nearly unrepairable. Meanwhile, the evil Shockwave has cloned a legendary Predaking beast and turned it loose on the defenseless people on Earth. We’re doomed!