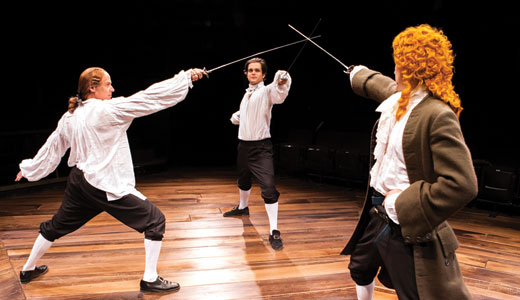 In some circles, uttering the words “classic novel” is an invitation for everyone in the room to pull out a smartphone and catch up with all the stuff that passes for wit on Twitter. And if you want the room completely to yourself, just add the delicious detail that the particular classic novel of which you speak was written in 1749.

And yet, Henry Fielding’s “The History of Tom Jones, a Foundling,” is a bawdy, comic, satirical novel that reads as if it were written last year — and is way funnier than anything you’ve seen on The New York Times best-seller list (or Comedy Central) in many a year. Likewise is Jon Jory’s new theatrical adaptation, “Tom Jones,” running at Actors Theatre of Louisville in a production Jory directed. It’s no easy task to bring this smart, sprawling, ultra-modern novel to the stage. Fifty years ago, Tony Richardson made a superb film version you can see anytime, streaming or on DVD. But the staged version? It only runs through Dec. 8, and you should see it now when you have the chance.

There could be no better way to lift your holiday spirits than with a couple of hours of outrageously funny acting by a perfect cast (most playing multiple parts) outfitted in some of the most colorful garb, makeup and hair you’re likely to see on a stage this year (Marcia Dixcy Jory designed those costumes). Also, there are some pretty funny sword fights (choreographed by Drew Facher). And there are few things more amusing than a funny sword fight, except maybe the sound of a poached partridge falling from the sky with a resounding thud — an incident that drives a big part of the plot.

Speaking of plot, Jory weaves together the main gist of the novel in a cunning series of episodes that capture the gist of the story (and even manage to capture a bit of Fielding’s discursive, tangential narrative style). The story revolves around Tom Jones (Drigan Lee), a foundling bastard who grows up to be a good-hearted lad with good intentions — and a handsome countenance that is irresistibly tempting to members of the fairer sex, who continuously lure him into sexy troubles. Tom is taken up by equable, gentlemanly Squire Allworthy (Greg Wood), whose nephew, Blifil (Matt Citron), is an odious Bible-thumping hypocrite and who is in cahoots against Tom with Thwackum (Alex Podulke), another hypocrite.

Nearby lives Squire Western (V. Craig Heidenreich), a rambunctious, roaring, lusty hunter with violent tendencies and a love of partridges, and his comely daughter Sophia (Maren Bush), who pretty much exudes the image of chaste virtue from every pore — but who falls for Tom, despite her father’s insistence that she can’t marry a bastard and must marry Blifil.

Events (including some ill-intended matchmaking by Squire Western’s sister, played by Alex Tavares) cause Jones and Sophia to flee (separately) to London. For Tom, that means flirty misadventures with Mrs. Waters (Susan Riley Stevens), a surreal, platinum blonde morsel called Lady Bellaston (Robyn Cohen) and an eventual date with the hangman. Yep. That’s a cliffhanger. See the play.