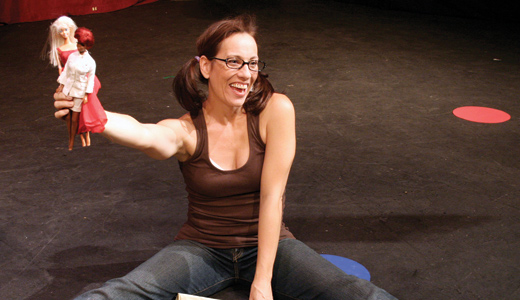 In science, slant culture refers to the microbiological activity that occurs when a glass tube is set at an incline, fostering massive amounts of rapid growth. In Louisville, however, that term means something else entirely.

The second annual Slant Culture Theatre Festival kicks off at Walden Theatre this weekend, with a launch party Thursday night (7 p.m., $12) featuring “hijinks, drinks, the Grind food truck and music.” These are a few of Louisville’s favorite things, after all. The 10-day festival features an impressive roster of Louisville theater-makers. While last year’s inaugural fest focused on the five producing companies — Walden Theatre, Theatre [502], Savage Rose Classical Theatre Co., Louisville Improvisors and Le Petomane Theatre Ensemble — this year, they opened up submissions to the greater community, resulting in a diverse array of creative offerings.

“We put out a call for submissions and received some great entries from area companies,” says festival director Teresa Willis. “The guiding principle was it had to be ‘slanty,’ that it had an unconventional viewpoint or approach that fits with the vibe of Slant. Five companies hit the mark: Pandora Productions, Looking for Lilith, Marrow Street Theatre, Baby Horse Theatre Company and Walden Alumni.”

These groups, along with the producing companies, will present a delightfully diverse smorgasbord of theater — from turn-of-the-century French sex farce to scientific vaudeville, a haunted house lit by audience members’ flashlights to two children’s perspective on domestic abuse. The festival ranges from the heart-wrenching to the playful; in just one weekend, you can go from hate crimes in Appalachia to robot tomato gardeners. The focus throughout remains on experimentation, pushing the bounds of human creativity to find new ways of expression through performance.

“‘Slant’ has always referred to looking at things from a new angle; storytelling and the human experience are at the core of it,” explains Alison Huff, managing director for Walden Theatre and co-founder of the Slant Festival. “We want to facilitate as many ways as we can to convey that through live interaction, whether it’s a play or storytelling or live music.”

Willis echoes her sentiments: “For me, it’s become a motif, a language, an attitude … it’s difficult to describe, but I know it when I see it. And I think it’s a concept whose time has come, and Louisville is just ripe for Slantiness. It’s about shunning the norm in a fun and exciting way — not just for the sake of being different, but to promote expansiveness and alternative pathways of creation.”

Slantiness can take many forms, and this year’s festival also includes lectures, one-person shows (including one from Willis) and a Moth StorySLAM. Willis and Huff’s focus has always been on cross-pollination — bringing the creatives of Louisville (and their fans) under one roof — and with such a diverse slate of artistic fare and more than 100 participants and volunteers (double from last year), it seems the experiment is working.

Quirky and eclectic, as weird as the city it celebrates, we feel pretty confident in our hypothesis that Slant will continue growing bigger and better than ever.