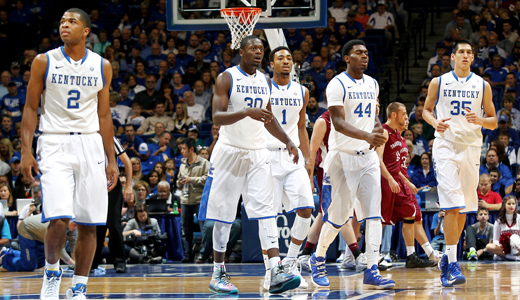 When last season’s Kentucky basketball season came to an end in a small gym to an anonymous college in downtown Pittsburgh, most UK fans took the loss surprisingly well. Usually, the Big Blue Nation watches the games with the intensity of a fire-and-brimstone preacher, demanding the Lord smite any player or referee who stands in the path of the righteous team. Yet when Kyle Wiltjer’s potential game-winning three rimmed out at the buzzer, sending UK to an embarrassing first-round NIT loss, most Wildcat fans approached this new reality with a Zen-like acceptance. This was our fate. We had committed the sin of hubris, of demanding ceaseless greatness, and this was our comeuppance. It was like watching a racist great-uncle die in a hospital. It’s sad to see anyone go, but alas, all things come to an end, and to be honest, we won’t miss this too much.

The next day, all-world power forward Julius Randle put on a UK baseball cap and announced he would be a Wildcat, launching Kentucky’s already top-notch recruiting class into another stratosphere, causing many pundits to declare it “the greatest of all time.” We’d committed the sin of hubris and were damn ready to do it again.

Kentucky has three players on their bench (Dakari Johnson, Marcus Lee and Alex Poythress) who should have long careers in the NBA. Were it allowed, four of UK’s freshman (Randle, twin guards Aaron and Andrew Harrison, and swingman James Young) would have been snatched up in the first round of last year’s NBA Draft. Two Wildcats (Poythress and center Willie Cauley-Stein) have already deferred their NBA dreams, electing to come back to Lexington and use this season as the mouthwash to clean away the bad taste from last year’s anchovy-and-feces sandwich of a season. After observing a recent practice, a pro basketball scout called Kentucky “a good NBA team.” Of course, none of this guarantees UK’s ninth title or acts as holy water to protect the team against injuries or fluky games, but from top to bottom, at every position, Kentucky is superior to every school in the nation and is poised to dominate.

But you knew that. You live in Kentucky, which means that even if you’ve been in a Buddhist monastery or in solitary confinement in prison, there’s been someone whispering in your ear about the upcoming basketball season. And you’d be forgiven for thinking it all sounds familiar. UK has a monster recruiting class, a high preseason rating and a talented, unproven squad. How is that different from last year’s NIT flameout team?

Last year’s team could play, no doubt, but not together. They moved at different speeds and spent the bulk of each possession staring at each other, waiting for someone else to take the lead. As a whole, they regarded their teammates as they would their mother’s boyfriend — an outward acceptance but no real bond or chemistry. When the one unreservedly beloved player, Nerlens Noel, tore his ACL and collapsed on the floor screaming so loud the cameras picked it up clearly, it was the first moment in the John Calipari era where UK fans stopped caring about basketball. He wasn’t our star player anymore, but a kid — he should’ve been a high school senior really, but he reclassified so he could play at Kentucky early — in horrible pain, and we couldn’t do anything but watch (a feeling Louisville fans would come to know soon enough). When the dust cleared and the game mattered again, Big Blue Nation felt lost in a way it hadn’t in years. This team was no longer frustrating or disappointing — it was average. The play was unremarkable, the players were mumbly and sullen, and the team was forgettable. That wouldn’t do.

So out with the old. Out goes Ryan Harrow, the maligned North Carolina State transfer who had the squeaky high voice of Michael Jackson but the grace under pressure, the leadership and the critical thinking skills of Michael Jackson’s doctor. Out goes streak-shooting Kyle Wiltjer, a stellar complementary cog in an otherwise functional machine, but unable to play the role of leading man, in part because he defended as well as an overworked, alcoholic public attorney. Out goes the occasionally brilliant Archie Goodwin, the uber-athletic shooting guard who led every fast break the way a toddler runs a race, with his head down, unconcerned with what’s in front of him.

More importantly, out goes the timidity from the Big Blue Nation. We’d been on such a hot streak that we almost felt guilty for our success. As great as it was to be a Kentucky fan during the first three years of the Calipari era, it couldn’t help but feel like the episode of “The Twilight Zone” where a gambler goes to hell and wins every game until life loses any joy. Before Calipari, we had Billy Gillispie, the only man in history who could suck the fun out of both Kentucky basketball and excessive drinking. We were so desperate that when we started having championship teams that were actually likeable, we dared to hope this could last forever. It couldn’t. It had to take a year off.

But isn’t college basketball better this way? The world of sports has no circus like Kentucky basketball when the team is special. Kentucky fans are talking openly about going undefeated as though last season never happened. The Louisville Cardinals, who arguably had a better season than Kentucky last year, are getting in on the fun.

Cardinals guard Kevin Ware recently started a feud with Wildcat great Anthony Davis by tweeting: “I want Anthony Davis head. He a botch for real.” At first I thought he was calling Anthony Davis’ unibrow one of God’s botches, but his intentions were more lowbrow — Davis and Ware dated the same woman, and he apparently made a typo. Ware went on to threaten to put five shots in Davis’ head “cus I’m a blood.” It sounds bad, but Ware quickly pacified the gullible by claiming his Twitter was hacked. We can rest assured knowing that in the age of the NSA, the top spies are hacking Twitter accounts to send Anthony Davis death threats and New York interns pictures of Anthony Weiner’s penis. Despite the spies’ ability to crack passwords, they don’t know how to spell “bitch.”

This rivalry will not stay on the court. It’s already worked its way into politics. Mitch McConnell — in case you mistakenly thought he had redeeming qualities — is a huge Cardinal fan, and his opponent, Alison Lundergan Grimes, wants to take advantage of that. Basketball trumps politics in this state, and it’s not close. There’s a healthy chunk of the fan base who would still vote for Richie Farmer, despite the fact that he’ll soon be heading to prison for stealing taxpayer money and pocketing a few VCRs. If he wanted to mount a comeback, all he’d have to do is stage a rally and lead the chant: “Seized-V-H-S/Cats, Cats, Cats!” We are a forgiving people.

But this is all background. In the fight between Kentucky and Louisville, both brilliant and arrogant coaches have teams playing out of their heads and fan bases who are out of their minds. It’ll be a circus, it’ll be ridiculous and blood will be shed. Isn’t college basketball great?

Dunk Dynasty: Can the reformulated Cardinals keep it cooking?