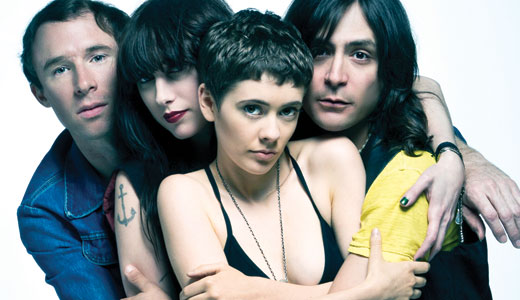 ‘Why the Past Won’t Go Away’

If you don’t know your past, you won’t fully understand your present. Tonight, Dr. Khalil Gibran Muhammad, the director of the New York Public Library’s Schomburg Center for Research in Black Culture, will bring this message during the seventh annual Anne Braden Memorial Lecture at U of L. Dr. Muhammad’s lecture will discuss the nation’s decreasing investment in history studies — including often faulty memories of the March on Washington 50 years ago — and how this can impact the perceptions of young people. He’ll touch on how an accurate understanding of history affects understanding the issues of today, such as racism, incarceration, criminal justice and the killing of Trayvon Martin. The lecture is free to the public. —Joe Sonka

An epic tale of a tumultuous relationship between a boy and his horse, “War Horse” starts at the beginning of this cross-species relationship, travels with the horse as it’s sent off to help Britain during WWI and comes full circle to an inevitable reunion. This play will take you on all the expected twists and turns but still enrapture you with its breathtaking set design and heartwarming story of compassion and grace. It’s like “Black Beauty” but more fierce. The props are amazing and feature giant steampunk-esque horse puppets strong enough to be ridden by the actors. The show is an example of art and theater melding together. A four-time Tony Award winner, “War Horse” is only in town for one week, so get thee to the theater. —Sarah Duncan

The African-American Theatre Program at U of L offers the country’s only graduate certificate in African-American theater. This week, the program celebrates its 20th anniversary with a production of “Monsieur Baptiste, the Con Man,” a modern adaptation of Moliere’s “Tartuffe” by Roger Furman, who founded the oldest black nonprofit theater company in New York City. The humorous play follows a religious con man who infiltrates a wealthy household in 19th century Haiti. Other public events scheduled throughout the week include workshops by Broadway director and producer Woodie King and actress Jasmine Guy; a dinner gala honoring King, Guy and Voza Rivers (a producer who works at the aforementioned NYC theater company); and a performance of “Mason Dixon” by AATP head Lundeana Thomas and theater chair Rinda Frye, who will both retire next year. —April Corbin

The Destination is the newest and freshest comic book store to open in Louisville, filling an often-overlooked fanboy void usually only met at major comic chains and conventions. They’re bringing in artists to do signings already, with hopes to branch out toward celebrity meet-and-greets in the future. This week, the Theme Time Comedy Hour features four of the city’s “nerdiest” comedians — Eric Sorgel, Craig Williams, Jaz Rodgers and Kent Carney — hosted by the immutable Jake Reber. This week’s theme will be the gargantuan Hulk Smash media conglomerate that is Marvel; from Stan Lee to modern classic films like “Iron Man” and “The Avengers” to the less-classic fodder of “Ghost Rider” and “Daredevil,” they‘ll touch on them all. If you read comics, or had any sort of childhood at all, this should be a hilarious walk down memory lane. —Brent Owen

Mothership Ensemble plays Thursday night at Decca, performing “Workers Union,” a highly experimental 1975 work by Dutch composer Louis Andriessen, winner of the 2011 Grawemeyer Award. “The way ‘Workers Union’ is written is really interesting,” says Mothership co-director Jacob Gotlib. “It doesn’t tell you how many musicians are needed to play — leaves that entirely up to you. It also doesn’t give you the exact notes to play. It does give you the rhythm that’s really precise and tricky to all get together. But the actual notes are left totally up to the performers. That way, lots of different combinations of instruments can play it — so that no two performances of ‘Workers Union’ are ever identical.” Mothership Ensemble will also perform “Mayaplis,” a new composition by Rachel Short, and “Full Sunlight” by Chris Kincaid. —Bill Doolittle

The Fine Art Firm Gallery and the Preston Arts Center are presenting an artistic event that will let viewers see how artists create as well as have a chance to get their hands dirty. Eight artists will demonstrate how they do what they do, including sculptor Guy Tedesco, calligrapher Jan Hurst and FAF gallery co-owner/painter Katarzyna Kociomyk. “The focus of the evening will be to make art and to create the understanding of art skills, making it accessible and inviting to all participants,” says FAF Gallery co-owner Wojtek Pilczynski. “We will do this by engaging the guests in experimenting with art tools and demonstrating the initial steps in art making. Our purpose is not to sell finished work, but to inform and educate the attendees on the effort to create art.” —Jo Anne Triplett

Ukulele virtuoso Jake Shimabukuro returns to Louisville supporting his new album, Grand Ukulele. The songs range from a solo cover of Adele’s “Rolling in the Deep” to orchestrated pieces like “Missing Three” and the classic “Over the Rainbow.” Asked if recording with an orchestra affected his approach to playing solo, Shimabukuro responded, “One of the things (producer) Alan Parsons told me at the beginning … was that he wanted me to approach each song as if I were going to perform them solo. Of course, the orchestra adds so much to the song — but in a live setting, I feel the solo arrangements are just as powerful.” He dryly added, “The best part about being a touring ukulele player is that everyone has such low expectations.” —Martin Z. Kasdan Jr.

Master P is gonna make ’em say “Mmmm.” The rapper/entrepreneur cleaned up his lyrics in 2007, but that wasn’t enough for the Last Don. To become a more positive influence in the industry, he then established the P. Miller Food Foundation for the Homeless and three P. Miller Youth Centers. He visits Louisville to support the “Let the Kids Grow” food drive at Fourth Street Live. It is one of two drop-off locations for donations (the other is at the YMCA on Second Street). Per food-drive standards, non-perishables are preferred — think Thanksgiving grub: canned, instant, powdered goods, or your extra batches of cranberry sauce or boxed desserts. Master P will be on site Saturday for the drive’s last day to host a collecting event. Get your copy of Ghetto Postage signed by the man himself. —Lara Kinne

Damaged Goods has become one of the premier improvisational theater companies in town. Their shows are classic with a modern twist, offering a wholly unique perspective on an old art form. Equally innovative improvisational troupe Nashville Improv Company hails from … you guessed it, Nashville. N.I.C. has helped turn Nashville into somewhat of a theater mecca (which is sadly still over-shadowed by the city’s regular output of Taylor Swift albums), through their monthly sold-out shows at the Bongo Java Theater. For this one time-only performance, both troupes will perform together on the same stage, plus you’ll get individual sets from each troupe as well. The show will be molded from audience suggestions and will spawn belly laughs that promise to resonate throughout the holiday season. —Brent Owen

Tennessee-based quartet Those Darlins had only three members when they began working up the songs that would become their third album Blur the Line. As Jessi Darlin describes it, the early sessions “didn’t have the full sound. All the parts we were writing — we couldn’t get them all in.” The solution was “to focus on our individual personal contributions.” Jessi, a Louisville girl, took to acoustic guitar, bringing in bare-bones material — and by the time Adrian Barrera re-completed the lineup, the band had strong tracks with a theme Jessi characterizes as “finding strength through your vulnerability.” This group has never been afraid to look straight on at life at the bottom (tough folk-punk opener “Oh God”) or enliven some songs with quirky alt-country or even bouncy pop (“Baby Mae”). Diane Coffee is the opener. —T.E. Lyons

Church of the Ascension

To open their 21st season, Louisville’s semi-professional choral ensemble returns with a doozy of a show aimed at some of Kentucky’s favorite things: author Wendell Berry, pianist Harry Pickens and … well, I’m sure someone will bring a flask filled with bourbon in his coat pocket. “I Go Among Trees” is the name of the show, conducted as always by founding artistic director Frank A. Heller III. Pickens will perform 10 new pieces with lyrics taken from Berry’s poems. In a video promoting the concert, Pickens says he has always had a great respect for Berry, both as a person and as a writer. Pickens lived with the poems, meditated on them and walked with them in the woods before discovering the music meant for them. —Peter Berkowitz

What the public normally sees and doesn’t see are combined into David Iacovazzi-Pau’s latest series of portraits, with personality coming into play as much as the physical. “My aim is to portray idiosyncrasies and evoke the mood of the subject in order for the portrait to have an accurate likeness and effect,” he says. This time around, he tackled some of his fellow artists, like painter Gaela Erwin. Iacovazzi-Pau also included people who happen to be known beyond our borders for things other than visual art, like musician/actor Will Oldham and poet Ron Whitehead. All are his friends. The exhibition features his process, from photography to drawing to painting. This is another example of giving the public a chance to see what it normally doesn’t see — an artist’s creative steps. —Jo Anne Triplett