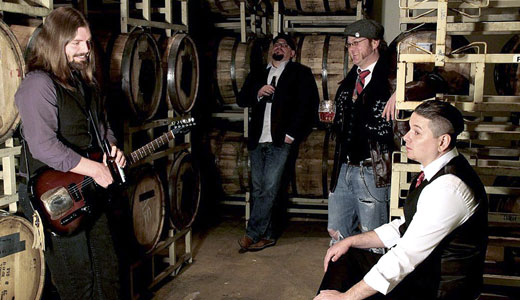 The Tunesmiths have a new album for you — and by you, they mean each and every resident of Louisville. Their new album is called Derby City, and some of its songs include “Derby City” and “Jammin’ in the Ville.” Some of their lyrics include tributes to local music institutions such as Headliners and WFPK. This is a band that is proud to celebrate its city and has no major plans to tour or leave ever, if possible. For this last 2013 edition of the theater’s “Faces at the Palace” series, they’re joined by like-minded heavy blues-rockers The Bad Reeds and El Roostars, with classic R&B/soul/early rock master DJ Woodrow on the Radio filling in the sounds to make you get down between sets. —Peter Berkowitz

Perhaps the best thing about the campy send-up “Star Wars in 60 Minutes or Less” is that the five actors playing all the parts don’t have to change George Lucas’ already campy dialogue too much. Seriously, the reviews of this show suggest that if you’re a fan of the original “Star Wars” trilogy (and who isn’t?), you need to see this. The show is a frantic retelling of Luke Skywalker’s epic journey, complete with droids, wookiees and intergalactic princesses. First produced in 2011, “Star Wars in 60 Minutes or Less” made its return last year for WonderFest and Fright Night/Fandom Fest, and has since been staged nearly a dozen times at The Bard’s Town. Well, now it’s back with the Bard and will be on full display this Friday and Saturday. May the farce be with you. —Kevin Gibson

This time of year, mentions of bells a-ringing tend to refer to the caroling, church-chiming, Salvation Army-hustling variety of tinkling musical domes. But with “Bells Are Ringing,” the As Yet Unnamed Theatre Co. brings up a whole other kind of nostalgia, for a time long ago when telephones, big non-portable objects that they were, would sound a metallic chime and, if you didn’t pick up, there was no voicemail to take a message. Instead, you had Susanswerphone, the answering service that lies at the heart of what AYUTC calls a “sweetheart of a musical.” The brainchild of old-time musical-comedy rock stars Betty Comden and Adolph Green, the play made its Broadway debut in 1956, with one revival in 2001. So unless you caught the 1960 Dean Martin film, chances are this is your first opportunity to witness the musical comedy and retro technology of this little darling. —Jennifer Harlan

Collectors impatiently wait for the LOCALS (Living On Clay And Louisville Soil) ceramicists to have their annual pottery sale. The main reason is the high quality of the artists and their wares. One LOCALS member is Laura Ross, who received this year’s Artist Award from the Governor’s Award in the Arts. The nationally known potter says she wants to create more of a regional presence, so that’s what she’s focused on the past 10 years. “I think there’s a lot of merit to being rooted right here in this state, this region, this city,” she says. Other LOCALS include Amy Elswick, Wayne Ferguson and Tonya Johnson. Each year they invite other ceramicists to show with them; this year’s guest artists are Mike Imes, Dan Evans and Janet Tobler. —Jo Anne Triplett

Those who were there the first time around have been waiting with some anxiety for the grunge revival. Gen-Xers fear that such a movement will needlessly revive some of its easiest and worst aspects — the heroin, the basketball jersey with skater shorts fashion sense and the melodramatic crooning of the Staleys and Vedders. Such a threat — which will likely overlook the much more exciting but less financially successful aspects of Mudhoney, Screaming Trees, Tad and many others — might possibly overtake the Mumfords and Avetts of the Folk Scare revival. This is where Louisville’s Iron Bells come in. Will their debut album, Black Gold, be the breakthrough that brings grunge-esque riffing and soulful-man vocals back to the mainstream? It’s only $5 to find out. —Peter Berkowitz

An evening of punk rock variety brings three ass-busting bands to play. Nashville’s self-described “pussy rock” outfit Roman Polanski’s Baby are the out-of-town guests, fronted by a singer whose screaming female trill can make your stomach turn. But those snarls only top her most sarcastic lyrics, angrily kicking a crunchy riff into the next verse — think of every boring aspect of punk, reverse it, and the result resembles Roman Polanski’s Baby. Vibrolas return with more vehicular-inspired, auto-garage grime; they are the leading Kentucky band for songs about cars, and they’re proud of it. The tenacious Madame Machine will surely wind down the ruckus with their frothy prog-lite, but don’t expect a quiet moment. —Lara Kinne

If you’ve read all 39 of the plays William Shakespeare penned, bravo to you and your English degree, because you probably don’t need to see “The Complete Works of William Shakespeare (Abridged).” For the rest of us, this CliffNotesian romp might help us better understand all the obscure “Much Ado About Nothing” and “Twelfth Night” references our baristas keep making. Joey Arena, Scott Davis and J.P. Lebangood will plow through every single one of the playwright’s works in a scant 90 minutes. That’s a whole lot of comedy, tragedy and Henry IV to get through, so expect a lot of fun shortcuts and creative analogies in this clever comedy. —April Corbin

It’s beginning to look a lot like Christmas. Liberty Tattoo’s “Under $50 Art Show” is often the first indicator that a plethora of these shop-local holiday shows are coming for your benefit — to keep you away from malls and spending your money where it counts. More than 20 artists have their work for sale at the tattoo shop, including jewelry by Michelle Amos and DRTY AWSM, leatherwork by Scott Henderson, photos by Jada Lynn and paintings by Pony Willoughby and Dan Meece. This year Liberty is donating all the proceeds to the Shamrock Foundation, so that’s even more padding for your karma points. On Saturday, they’re hosting a holiday part from 7-10 p.m. where you can meet the artists and win prizes. —Sara Havens

Before Louisville Metro Animal Services found him tied to a chain-link fence in the Parkland neighborhood, Frodo was just a nameless, defenseless, malnourished dog with his muzzle duct-taped shut. Thanks to The Arrow Fund, a local nonprofit specializing in extreme cases like his, the pitbull mix underwent life-saving surgeries and has fully recovered. Frodo will be at Spetz Gallery on Dec. 12 during an artist reception for Connie Sandusky, who will be showcasing a series of seven original oil paintings inspired by his heartbreaking but hopeful tale. The exhibit will be on display through Jan. 15. If you can’t wait until then to support The Arrow Fund, Spetz is also hosting a “chili and wreaths” fundraiser on Sunday (from 11 a.m.-3 p.m.) with adoptable animals and holiday wreaths, handcrafted gifts, baked goods and chili for sale. —April Corbin

‘Epiphanies’ by James Russell May

It’s not often I see someone accomplish exactly what they set out to do. “Epiphanies” is an exception to this rule. With the goal of “making old fresh,” James Russell May hit his mark in a big way. His pieces juxtapose strikingly detailed images of the human form with abstract, textural resins in quite possibly the most beautiful way I could ever imagine. Elegant and classically posed, the nudes appear to float ethereally among rich and earthy hazes. Each piece is phenomenally detailed yet remarkably abstract and undoubtedly captivating. When paired with the welcoming and fun atmosphere of Tim Faulkner Gallery, this show is not to be missed. —Sarah Duncan

Diego Garcia was the fine-faced frontman of Elefant. Does anyone remember that band? In the early 2000s heyday of pop-punk, they were ideal bloody valentines; they covered The Smiths for the movie “500 Days of Summer” and disbanded in 2010. Now, the solo Garcia has reemerged with a debut named Laura (nice title), singing the same frequency of sentimental catch phrases. But the music is not Elefant’s. This goes back to the first time 14-year-old Garcia picked up an acoustic guitar, the tangible link to his roots. So while he still writes about love, the songs simmer in Spanish folk rhythms and classical finesse. No more than two other musicians join him on stage, usually cello and another acoustic guitar. Canada’s Jenn Grant opens the set, carrying new goods from The Beautiful Wild, her most far-reaching album to date. —Lara Kinne

Abstract Expressionism, that revolutionary art style of the 1940s and 1950s, continues to have its followers among artists. One such artist is Michael King, who works in the action-painting substyle of Abstract Expressionism (its most famous practitioner was Jackson Pollock). Abstract Expressionism was his first love, but life got in the way. He was able to make a living in art as a textile designer, silkscreen printer and graphic designer, but it wasn’t until his semi-retirement that he was able to get back to painting. He says his “recent paintings … are intended to provoke warm, vibrant emotions and to inspire in the viewer a boldness in the enjoyment of life.” The artist’s reception is during the Nov. 29 FAT Friday Trolley Hop from 6-9 p.m. —Jo Anne Triplett