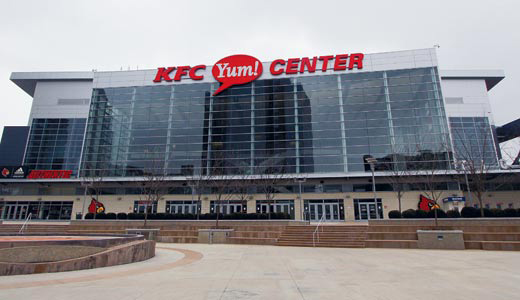 The financially troubled KFC Yum! Center is beginning to turn the corner and head toward success — at least according to the Louisville Arena Authority (LAA), the public-private entity created by the state to manage the construction and financing of the $238 million arena.

The LAA has struggled to make its debt payments for the $359 million worth of construction bonds in recent years, as sales tax revenues from the tax increment financing (TIF) district around the arena — which were expected to provide a bulk of their debt payments — have woefully underperformed.

But recent developments with the arena have LAA officials publicly crowing that things are looking up. New arena operator AEG took over for the inefficient Kentucky State Fair Board (KSFB) last year, with success. Metro Council recently passed an ordinance that would lower the size of the TIF district, citing research by the state that tax revenue could increase by more than $2 million. Additionally, an agreement between LAA and the University of Louisville on arena advertising revenue is expected to provide another $1.5 million to LAA over the next three years to go toward the debt.

However, it is yet to be seen whether such optimism is shared by those who really count — particularly Standard & Poor’s, the credit rating agency that downgraded the long-term outlook on the Arena Authority’s bonds last year and again this summer. S&P officials recently met with the Arena Authority to discuss their current financial situation, and their new report on the bond rating is due in December.

Despite the optimism of LAA officials, a close look at recent developments surrounding the arena’s finances — as well increasing debt payments in coming years — raises serious questions as to whether such optimism is simply public hype in the face of more failure.

After originally claiming that LAA owed it more than $7 million in reimbursements, KSFB announced in May that it had come to an agreement with LAA on a $1.47 million payment to satisfy the obligations of their contract to operate the arena, which KSFB CEO Rip Rippetoe characterized as a “clean break.” This payment was for services KSFB provided until their duties ceased last summer, but included no payment for what was estimated in a May LAA financial audit to be $5.25 million owed to KSFB for “a Freedom Hall Reimbursement to be paid annually to compensate for any net-negative impact” experienced by the fairgrounds, a contractual condition in which KSFB would by compensated for business taken by the Yum! Center.

Despite the fact that the Arena Authority never made such a payment, Rippetoe clearly stated in a letter to LAA chairman Larry Hayes that the $1.47 million payment “shall satisfy all obligations of the Termination Agreement, including the Negative Impact Reimbursement.”

The fact that a state agency such as KSFB — which received a $5.5 million bailout by the General Assembly due to its own financial troubles — forgave roughly $5 million in debt owed to it rankled state legislators. In a July 17 meeting of the Capital Projects and Bond Oversight Committee, Rep. Jim Wayne, D-Louisville, and Sen. Chris McDaniel, R-Taylor Mill, railed against this debt forgiveness, claiming KSFB had no legal authority to do so.

The following week, KSFB quietly sent out a virtually unreported “clarification” on their May agreement, stating that LAA had not yet satisfied its requirements to pay reimbursement due to the net-negative impact on Freedom Hall, and this figure would be calculated and due in January.

Appearing before the next Capital Projects and Bond Oversight Committee hearing on Sept. 17, Hayes and Rippetoe told legislators that the previous $5.25 million figure had virtually vanished in a fog, as they wouldn’t know the exact net-negative reimbursement figure until it was calculated in January.

“It has to be carried on the books as an anticipated receivable even though it doesn’t kick in until that portion of the bond indebtedness document says that it does, and so that’s where it gets very convoluted,” Rippetoe said.

Former LAA chairman Jim Host — who Hayes calls “the father of the arena” — testified that the KSFB reimbursement fund wasn’t paid in previous years because the agency operated the arena so poorly that there was never enough money left for it after meeting payment obligations that ranked higher contractually. Host, while bragging about the success of the arena, said such a payment was “not going to happen in 2014, but it will eventually happen.”

Rep. Jim Wayne — a skeptic of the Yum! Center’s financing plan before and after construction — tells LEO that KSFB has “reneged” on their original debt forgiveness agreement because they were caught and called out on it, and what is happening now is a frantic scrambling of money designed to hide the obvious: The arena is in serious financial trouble.

“The Arena Authority doesn’t have enough money, therefore the payment to the Fair Board isn’t going to happen, therefore they’re going to have that big hole in the Fair Board budget, therefore the Fair Board is going to come to the General Assembly for another bailout,” says Wayne. “Let’s just face the music, stop playing games and admit that (LAA) needs money from the state and let them go to the state to ask for money. I’m not sure if this is about recovering someone’s ego or to make sure it’s not deflated or bruised. We’re human, we made mistakes here, let’s go fix it.”

A far more daunting aspect for the ability of LAA to meet debt payments is the poor performance of the TIF district, whose revenues have only netted 32 percent of what was originally projected — $14 million short — and have to increase 600 percent to meet their 2018 projection of $20.6 million.

Metro Government had to kick in the maximum $9.8 million payment this year to LAA in order to avoid the threat of default. While the additional $1.5 million in LAA’s advertising agreement with U of L will add small assistance for three years, many argue the contract with the U of L Athletics Department still remains far too generous — as their basketball program is now the most profitable in the country by far.

The TIF figures for the past fiscal year were supposed to be announced in September but have still not been released.

While LAA projects the shrunken TIF district to bring in more than $2 million more in revenue, Finance and Administration Cabinet spokeswomen Pamela Trautner tells LEO that the amendment of the TIF project has not been finalized, as “what they’re waiting on is for bondholder approval on the change that was made by Metro Council.” LEO’s questioning of why such an amendment depends on bondholders and not the Cabinet itself has so far gone unanswered.

While most expected the new TIF district to go into effect for the current fiscal year, Trautner says the TIF revenue for last year will be calculated retroactively to the new, smaller district. This means that any additional revenue squeezed out of the TIF for LAA bond payments will be taken out of funds that would have gone to the state (as is the case with all TIF revenue).

Neither LAA chairman Hayes, nor the LAA spokesperson, responded to LEO’s inquiries for this story.

In the September testimony of Hayes — who is also secretary of the state Cabinet for Economic Development — he said he is not overly concerned with the performance of the TIF going forward.

“I think the initial numbers are that the TIF is growing at a sustainable rate and acceptable rate,” said Hayes. “I’m not being Pollyannaish about it; our short-term goal really is to maintain our Standard & Poor’s investment grade credit rating … We think we’ve got a great story to tell, and we’re meeting with them over the next several weeks. We think we can move that credit rating up.”

We’ll see if S&P agrees when their report comes out next month.