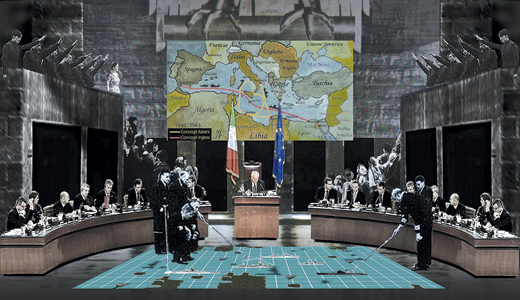 Wouldn’t it be something if someone was poking around an old villa in Italy and came across a previously unknown opera by Giuseppe Verdi? An undiscovered masterpiece by the composer of “La Traviata,” “Rigoletto,” “Aida” and so many more — that no one had ever heard!

That would be great.

But it didn’t happen. Verdi was so famous in his lifetime, there is little chance there would be an opera he wrote that no one knew about.

But local opera lovers might still feel the thrill of discovery this weekend when Kentucky Opera presents “Simon Boccanegra,” a Verdi opera that is occasionally sung in Europe but is almost totally unknown to American audiences.

Which makes “Simon Boccanegra” perfect for the Kentucky Opera, which has staked out a niche mission in the world of opera of presenting at least one new, or relatively unknown, opera each season. As part of that goal, the company designed and built a special set that perfectly fits the Brown Theatre stage and may be adapted to present new productions.

“The ability to create our own production design affords us the opportunity to explore masterworks that are seldom produced in this country. (Because) the sets are not available to rent,” says Kentucky Opera general director David Roth. “It allows us to expand the repertory boundaries of Kentucky Opera, moving beyond the popular and too often repeated operas.”

Verdi composed “Simon Boccanegra” in 1857, but it was not a success. Twenty-four years later, the composer revisited the score with the help of librettist Arrigo Boito, who added a major new scene — the Council Chamber. In the council scene, Simon Boccanegra, the Doge of Genoa, is seated in the center of the hall, with warring political factions on his left and right. This time, Italian audiences approved, though somehow the opera never hit the charts on this side of the Atlantic.

Verdi sets “Simon Boccanegra” in 14th-century Genoa. That’s even before the time of Genoa’s most famous son, Christopher Columbus. But Kentucky Opera has reset the story in 20th-century Italy in the populous, industrial city of Genoa — and amid a class-war power struggle between emboldened workers and old aristocracy. The action takes place in the explosive years between World War I and World War II — a time of the rise of Mussolini and the Fascist state in Italy.

“Paolo is the bad guy,” says Troy Cook, who sings that character in the opera. Cook told an audience for the WUOL-FM radio show “Lunch and Listen” that Paolo is the mastermind of his party and a ruthless infighter behind the political rise of Simon Boccanegra. “Paolo wants power, and he sees something in Simon that people will like, which will give him access to all the riches and power that come along with that,” says Cook. “You see that in the election, which is about scaring all the folks who are going to be voting. In order to get to Simon, you have to go through Paolo, the chief of staff. Everything filters through him.”

Simon Boccanegra is placed in the middle of this political cauldron, but also finds himself in the middle of a human problem of lost love and a lost love child. “He’s a wonderful character in that he’s externally driven through the entire piece,” says Malcolm MacKenzie, the nationally known baritone who sings the title character of Simon. “He’s basically a pirate made good who falls in love with the wrong girl, and is trying to make good on that.

“In the beginning,” MacKenzie explains, “Simon is easily manipulated by people around him. But what happens is he finds his long lost daughter, and that gives him direction — for a short amount of time.”

And the daughter? That’s Amelia Grimaldi, sung by Inna Dukach, who likes that her character is not your typical Verdi heroine.

“We were joking around in rehearsal that Amelia is more like a Verdi baritone, steady and in charge of things. She’s not a victim,” says Dukach. “Even when she gets abducted, she rescues herself. Amelia tells her abductors they’d better think twice about kidnapping her. ‘If Simon Boccanegra finds out about this, you’re going to be in trouble!’ she tells them — and just leaves.”

Maybe one reason Amelia doesn’t have to die in the end is because she’s a mature, modern woman.

“She’s actually older, maybe between 28 and 30 years old — which, for opera, is practically a grandma,” laughs Dukach. “Most of the characters I sing are, like, 15. I think that’s the reason she’s very centered. She knows what she wants and is never afraid — to ask for it, to beg for it, to get it.”

Beyond the richness of the characters — and the labyrinthine plot — one thing the cast all agrees upon is the beauty of Verdi’s music.

“To have a chance to do a piece that is so infrequently done,” says MacKenzie. “Let’s just say it’s a baritone’s dream piece.”

They’re all glad somebody dug this one out of the ruins.