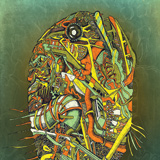 If the Louisville music scene has a unifying theme, it’s regularly producing acts that actively seek new sounds and ideas. With the release of the long-awaited Humility the Hard Way, Straight A’s continue that tradition by creating an album both imminently listenable and ripe with punk energy while remarkably resilient to identification by genre. With their titular track, Straight A’s flawlessly channel pre-“Whip It” Devo without coming off as derivative, paying homage while contributing their unique sensibilities. Where Humility really pays off is in its remarkable restraint, evidenced from opener “Yes I’m Calling You a Liar” that excludes the guitar altogether, privileging instead a simple combination of bass, drums and vocal. And then there’s “Brand X,” which is simultaneously brutally intense and delightfully catchy, the perfect counterpoint to an album that sounds uniform in its diversity.