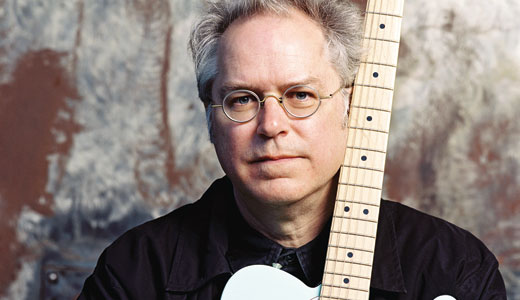 Guitarist Bill Frisell returns to the Clifton Center, this time bringing his Big Sur Quintet (featuring Eyvind Kang, viola; Hank Roberts, cello; Rudy Royston, drums; and Jenny Scheinman, violin). The ensemble will present music from their recent album Big Sur, a suite commissioned by the Monterey Jazz Festival. The songs range stylistically from the neo-classical beauty of the opening “The Music of Glen Deven Ranch” to the rock ’n’ roll of “The Big One,” with side trips to simple Appalachian-style pieces and more. After performing it in 2012, Frisell was approached by the newly revived Okeh label to record it. “We did that one concert at Monterey and, right away, I thought, ‘Wow! We should try to get more gigs,’” he says. “The most exciting thing is to be in that process as the music evolved. It felt like the Monterey Festival and the recording was planting the seed for this new music.”

For a jazz artist, the instrumentation is unusual. For one thing, there is no bassist. “It possibly goes back all the way to my experience playing with (drummer) Paul Motian’s trio with (saxophonist) Joe Lovano. For almost 30 years, we played as a trio with no bass; that has to have something to do with the way I’m hearing things. It’s not so much about the (bass) instrument, I’m just thinking about the personalities of the people and the sort of chemical reaction that happens amongst all of us. It’s like, later, I realized there was no bass — I was just thinking about these people and getting them together.

“All the time I spent with Paul, it was kind of a revelation,” Frisell continues. “We’re so conditioned to thinking that if you have drums, then you have to have bass — and music doesn’t necessarily have to work that way. With the guitar, there’s a very low register going on, and with the drums, too, it brings out different textures or overtones. The bass drum becomes a more important individual-sounding instrument rather than being something that’s just intertwined with the bass.”

While the music was written as a suite, Frisell says improvisation is part of the presentation. “What happens with these guys, there’s more of a spontaneous arrangement and orchestration. We’re staying within these structures, but it’s always changing as far as who’s playing what, and when, and how they’re playing it. Everybody could be playing the same thing in unison, or four separate parts, or any combination, and they’re making these choices instantaneously as we play — that’s part of what keeps it so fresh. We can play what’s basically the same music and recognizably the same song, but depending on the room and the feeling we’re having at the moment, it can really change drastically from night to night. The more we learn, and the more we internalize the music, the possibilities become larger and larger.”

Frisell is only interested in keeping the music growing, as opposed to constantly repeating the same strict composition. “That’s the way I’ve always approached the music — I want to be surprised every time we play. I know that it may be a challenge for the audience, but to me, the rewards are so much higher than if they know exactly what they’re going to get,” he says. “I hope they have that attitude that ‘we’re all in this together’ and it really does have an impact. Like, if you go into a new room, and if you feel that everyone is on the same wavelength, ‘let’s explore this together,’ it really can have a huge effect on the music. The vibe you get from the audience can affect it a lot.”

Frisell asks if the venue here was the same he played the last time he was in town. Upon learning that, indeed, it is, he responds, “I’m excited to play this music in that room. Every time I’ve been there, I feel like that’s one of those special oasis places in this country. The physical space is so beautiful itself that, for me, it’s a special place to play … with this group.”