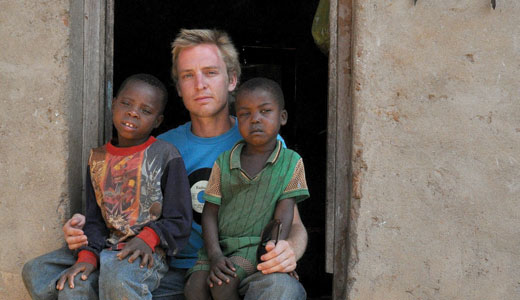 The Kingiti Sharing Group was born during a ladies’ night in December 2008. Pat Gagne, who teaches sociology at the University of Louisville, was having drinks with three of her former post-graduate students: Angela Orend, Claudia Sanders and Carla Rich. Gagne told the women about her recent trip to east Africa, where she visited another former student, Ben Belknap, who worked for the Peace Corps in Kingiti, Tanzania.

Kingiti is a small village in the remote Mpwapwa district. Its population of less than 3,000 people consists entirely of subsistence farming households growing corn, sorghum, peanuts and sunflowers to survive. During the week she spent in the village, Gagne was moved by the apparent poverty, limited access to education and lack of basic healthcare. As she shared her experience, the group of sociology professors began brainstorming ways to improve the village’s plight.

“We didn’t want to just send money,” Orend remembers. “We thought about ways you could turn a community around with small, limited funds. The idea of education came up because we thought if the people were educated, they could start their own small projects.”

The Kingiti Sharing Group was the end result of that night out. Each woman pledged money to send children to primary school, which is the equivalent of grades one through seven in America. The school fees were $15 a student. That covered school supplies, uniforms, shoes and the cost of a village health insurance card.

“Those are the things that keep kids from going to primary school,” says Belknap, who was the group’s point man in Tanzania for the first two years. “Sometimes the parents have no money, or they make bad decisions with their money. There is no money for books or uniforms. Maybe the dad left. That is a common story with a lot of our primary school kids. Or, maybe the dad can only afford to send half of his kids to school.”

The group sent 30 students to primary school that first year, a number they’ve maintained annually, although the fees have gone up to $30 because lunches are now provided. Six students have also been sent to the Kibakwe Secondary School, a high school in a nearby town. It costs $300 a year for those students because they require room and board. In 2014, in addition to its other programs, the organization plans to send 10 kids to the Kigwe School for the Deaf, a public boarding school just outside the town of Dodoma. These are children with minimal or no family support. Belknap, 29, has already been privately supporting one child since 2010.

“I always feel that money spent on education is money well spent,” he says. “We also want to send more kids to secondary school, but that’s all dependent on fundraising.”

The Kingiti School Scholarship and Village Health Outreach Fund, the name the organization adopted when it became an official nonprofit in 2011, will hold its annual fundraiser on Saturday, Nov. 23, at 6 p.m. in the Glenview Condominium Conference Room, 5100 U.S. Highway 42. The event will feature a silent auction, food and entertainment. There is no admission fee. The group just asks that attendees donate at a level where they are comfortable.

Belknap serves as president of the nonprofit’s board of directors. He left Tanzania in 2009 to continue his education, first in post-graduate school in Boston and then at U of L, where he is a second-year medical student. Initially, Belknap had his doubts about whether the scholarship program could survive without him in east Africa, but he soon realized he had built up enough contacts to ensure the money raised got to the students.

The group transfers its funds to an Italian nun, Sister Ana Bruna, who Belknap met during his Peace Corps days. She has lived in Kibakwe for the last 20 years. Bruna disperses the money to two Tanzanian project directors. Another friend from the Peace Corps, Jimmy Newhall, serves on the nonprofit’s board and provides local oversight. Newhall works for the Centers for Disease Control and Prevention in Dar es Salaam. Belknap also maintains communication with the Kingiti community, especially the older scholarship students who he talks to via cell phones and email.

Orend says the sharing group had to become a nonprofit because the original concept was not sustainable. “We just thought the four of us could support a certain number of students,” she explains. “That worked pretty well until the second or third year, when two of the ladies lost their jobs and each of us were dealing with finances. The economy was rough. That’s when we talked to Ben about opening up donations for others to help.”

Bringing in more money has allowed the group to be more ambitious. In 2011, the Kingiti organization attempted two projects with mixed success. A water purification plan failed because the group refused to pay bribes to Tanzanian officials for permits. But a plan to train two women as nurses was more successful. Belknap even went back to Tanzania for two months to make sure they had adequate facilities.

“On the front of one of their houses, we built a small room to keep some medications and medical equipment for trauma,” he says. “Burns and large lacerations are common in the manual labor of village life.”

For the time being, the Kingiti board has decided to focus strictly on education. Orend says it’s the best way to get a return on their investment. “Our goal has not changed,” she adds. “We want to give people the tools to change their own lives. Basic literacy is the foundation of a successful society.”

For more information on the Kingiti School Scholarship and Village Health Outreach Fund, go to kingiti.org.