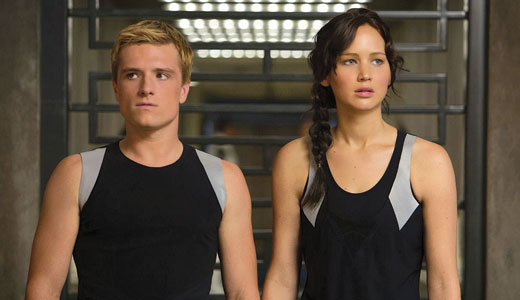 You all are gonna make me read books. There must be a code Hunger Gamers follow that doesn’t permit them to spill the beans on what happens next. Having just gotten into the “Games” within the last two months — I watched the original last month and now the sequel — I’m dying to know how it ends without having to crack open a book. But nobody will tell me, so I guess I’ll just fester in anticipation until the next two films come out.

“Hunger Games: Catching Fire” is as intense and fast-paced as the original, which I thought would be an impossible feat. I was curious as to why there would even be a sequel — Katniss (Jennifer Lawrence) and Peeta (Josh Hutcherson) rightfully won the 74th Hunger Games and should be able to go on living a humble existence in District 12, right? Wrong. I suppose living a humble existence wouldn’t spawn three more films, now would it? As mentor Haymitch (Woody Harrelson) tells them, they’re in it for the long haul. Tours, specials, reunions, spokespeople — Katniss and Peeta are now cemented in the public eye and remain pawns of the Capitol.

The sequel picks up as Kat and Peet get ready for a victory tour through the districts. When cameras are around, Kat still has to flash her puppy-dog eyes toward Peet, convincing the world of their young, blossoming love — even though she really only has eyes for Gale (Liam Hemsworth), her hunting buddy and childhood friend. We grieve with Kat over this torturous triangle of love until a much bigger problem arises — the 75th Hunger Games, called the Quarter Quell, will reunite past winners in a competition to the death. There will only be one victor this time! What are Kat and Peet to do?

The film picks up pace as the new Games begin and the best of the best are pitted against each other. Of course there are more obstacles (poisonous fog, birds that mimic the dead and tidal waves) and more assholes (a hardcore brother-sister duo are one of the best teams). But Kat and Peet manage to make allies with the likes of smarmy Finnick (Sam Claflin) and angry Johanna (Jena Malone), which increases their odds of survival as cannons signaling deaths go off left and right.

I suppose I should stop plot talk there, since I’m unsure of what I can reveal with this strict “Hunger” code. My one gripe with “Catching Fire” was that it didn’t really end. I realize there are more films in the series, but a sequel on its own should have a beginning, middle and end. Maybe if I knew what was going to happen, I’d feel better about a cliffhanging conclusion. But I’m now invested in Katniss’ wellbeing, and not just because she’s a Louisville girl. This might be the first time since I was 6 that books are on my Christmas list.