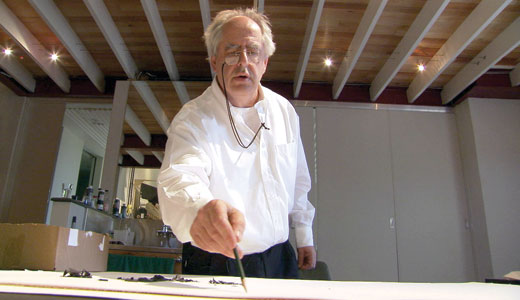 De La Soul (or, let’s be real, “Schoolhouse Rock”) may have taught us that three is a magic number, but we all know 21 is way more fun. From cocktails to blackjack, good things come with that lucky little number. This week, two more fun 21s join forces, as über-trendy Louisville landmark 21c joins forces with digital educational initiative Art21.

21c and Art21 share a lot more than two digits. At 7 and 10 years old, respectively, both are young organizations dedicated to educating the public about contemporary art, particularly the work of living artists, and making it both accessible and approachable. So it seemed like a natural fit to chief curator and director of art programming Alice Gray Stites for the museum and hotel to partner with the media company for a film program.

“A director at Art21 sent a proposal for 21c to sponsor a new series of short-form documentaries called ‘Exclusive,’” she recalls. “Coincidentally, around the same time, a number of staff at 21c had been discussing the idea of starting a regular film series as part of 21c’s public programming. We had had some prior discussion about screening the Art21 films that are broadcast on PBS, so when the opportunity was presented to become involved in their newest initiative, the time was right.”

The series kicks off this weekend with two films: “William Kentridge: Anything is Possible,” a feature-length documentary following the creative process of the multi-talented South African artist, and a short-form film from the “Exclusive” series, in which painter Trenton Doyle Hancock discusses the creative process for one of his large-scale, mixed-media pieces. Both films will be shown at the free screening, which is open to the public, and the entire “Exclusive” series will be available on Channel Two, 21c’s in-room art channel (and you thought room service was fancy …).

Stites describes the “Exclusive” series as the perfect complement to 21c’s mission of showcasing living artists. “(They offer) viewers an in-depth, up-close introduction to new art, new ideas and the artists who are shaping today’s cultural landscape,” she says. The short films use a mix of original and archival footage, giving viewers a unique, behind-the-scenes look at an artist’s creative process.

“William Kentridge” takes a similar approach, delving deep into the work and process of this acclaimed artist, whose work has been shown at the Venice Biennale and the Metropolitan Museum of Art, earning him a spot on Time magazine’s list of the 100 most influential people in the world for 2009 (and with a bio written by the late Lou Reed, no less).

As the program continues, Stites says 21c will showcase a diverse range of contemporary art, with the goal of sparking community conversation. “As the range of artists and artworks will span a very broad spectrum, exposure to these images, ideas and narratives will have an unpredictable range of impacts on the community,” she says. “And it is that unpredictability — the mysterious, myriad ways in which art can shape an individual’s perspective, forge connections, spark change, or otherwise influence a community — that reinforces 21c’s commitment to sharing innovative art and ideas.”