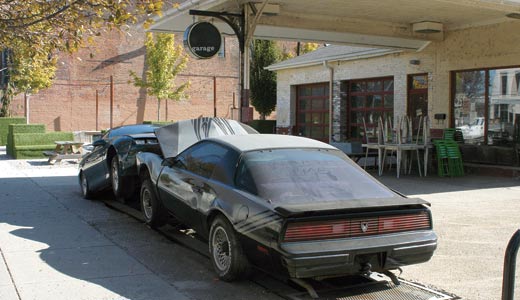 Birds of a feather flock together, it is said. And now it appears that maybe restaurants do, too. For many generations, after all, the dining scene that our parents and grandparents knew required a trip downtown for that special dining-out occasion. Neighborhood dining was largely limited to your friendly corner bar and grill, a diner or cafeteria or maybe a Woolworth’s lunch counter, or perhaps one of the city’s early pizzerias or chop-suey joints.

But then the Baby Boomers grew up and things changed. The ’70s and ’80s brought us Bardstown Road as the city’s first “Restaurant Row.” A decade later, the Frankfort Avenue renaissance took off. And now there’s an even newer trend, not only in Louisville but around the nation. “Restaurant Row” is so ’90s now. Say hello to the “Restaurant Cluster.”

“It may sound like a bad pun, but it’s actually one of the hottest trends in retail: restaurants feeding off each other for their success,” wrote Bob Young, managing director of The Weitzman Group, in Dallas’ D Magazine. “Independent restaurants are finding that restaurant clusters, especially in urban neighborhoods, help guarantee a level of traffic that might not be achieved if they were the only dining concept in a given area.”

Why, that sounds a lot like … NuLu! Or even New Albany, or maybe St. Matthews and other emerging local food-and-fun zones where more restaurants pop up and cluster together than would have seemed reasonable under the old rules.

Restaurant owners tend to be a fiercely competitive breed, but restaurant clusters seem to operate under different rules in which what helps one helps all. The urban neighborhood now known as NuLu may sound like small potatoes, with just a dozen restaurants within its tightly defined boundaries along East Market Street. But there’s a ton of excitement along that four-block stretch.

“All of the restaurants in the area work to support one another,” says Krista Kemple, spokesperson for Decca in NuLu. “If Please & Thank You has a busy morning and runs short on ice, they come to us. … If we have a large party walk in and we can’t accommodate them, we send them to Rye or Harvest. … If a couple having dinner at Garage Bar wants to catch some live music, the bartender sends them to us. We all play concierge for one another and look like heroes in the eyes of our patrons. It’s a win-win.”

Bruce Ucán, chef and partner at Mayan Café, who arguably set off the neighborhood trend years before developer Gill Holland coined the name NuLu, says he’s as happy as a corncob full of huitlachoche to see all the action nearby.

“Our sales grow every year,” Ucán says. “The competition … has encouraged each individual restaurant to be the best they can be. This ultimately means that all of our customers get better service and better food. You have to be on your A-game in this neighborhood or you’ll get left behind. I don’t think it’s a bad thing to be constantly challenged to make good food.”

“I think the evolution of a restaurant cluster has been a pivotal point in NuLu’s development and growth,” says Laura Wallace, owner of City Concierge and a NuLu resident and advocate. It wasn’t that long ago that this area had a couple of galleries and Mayan Café. Now people come to NuLu not knowing which restaurant they’re going to, just knowing they want to be here, and that there any many great options, specifically farm-to-fork

Downtown New Albany is home to some 20 restaurants now, populating a well-kept grid of fast-gentrifying historic urban building stock that looks quite a bit like NuLu.

“The restaurant cluster is the engine moving downtown revitalization, plain and simple,” says Roger A. Baylor, community activist and co-owner of New Albanian Brewing Company. “We’re doing our best to encourage folks to view downtown as a place to park, walk around and sample the wares.” He sees plenty of barriers still to overcome, not the least of those being inertia among traditional civic and business leaders, but he’s optimistic. “We all get along with each other,” he says. “The cluster has a good, cooperative feel.”

Ryan Rogers, proprietor of New Albany’s Feast BBQ, is optimistic, too. “I think we are on a great path. We have a committed and competent dining clientele who is open to trying the new places that open and their potentially newer ideas that may not have been seen before in downtown New Albany. The Exchange moving in next door to us has been a great addition. Just the sheer number of new faces they were able to bring downtown who didn’t know we already had a cool little restaurant cluster going on was fantastic.”