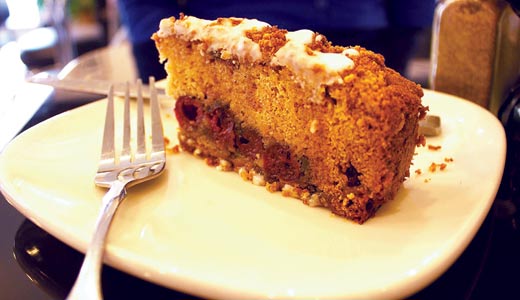 I can’t tell you how many times I’ve struggled to negotiate an outing with a vegan friend and other omnivorous company. As our restaurant scene grows, food options for alternative diets and lifestyle choices are definitely getting better, but they are still often limited to one or two items on the menu.

I wondered if this phenomenon also extended to desserts. I hit the town with a few vegan friends, and we were delighted to find there are options for the herbivore’s sweet tooth. Below are a few of my Vegan Sugar Rush Tour discoveries.

Where have you been all my life, Annie May’s Sweet Café?
Annie May’s Sweet Café at 3110 Frankfort Ave. was a jackpot of sugary treats for vegans in addition to options for folks with common food allergies like nuts, soy and gluten. We tried a sour cherry coffee cake that had a lovely crunchy crust of caramelized sugar. A modest drizzle of frosting didn’t overpower the subtle cherry filling. I had to admit, I was surprised it was so good despite its lack of butter and eggs. Following our coffee cake, we bit into a fluffy strawberry cupcake. The frosting was slightly heavier, but the cake was moist and tasted of real strawberries, not the usual manufactured-berry flavor. We also spied a tempting chocolate cupcake, oatmeal cookie sandwiches with cream filling and adorable monster cupcakes.

Vegan treats abound at Hillbilly Tea
We popped into Hillbilly Tea at 120 S. First St. where, rumor has it, there’s always a vegan treat on the menu. Tonight’s vegan selection was jasmine pearl teacake with jasmine frosting. The cake was moist but not overly dense, with a modest layer of frosting. It was slightly savory and floral, which made it less sweet than your regular cake. A dessert with a bit more complexity, it’s an adventure for vegans with a sensitive palate. Here’s a tip from our waiter: It’s normally offered as a cupcake.

Cake Flour offers up a Vegan Cupcake of the Day
Cake Flour at 909 E. Market St. stocks their displays with beautiful cupcakes and confections made from organic and largely local ingredients. They also have a daily vegan cupcake option. When we stopped by, the daily selection was pumpkin spice. It was the only vegan option available, so good thing it was delicious. The pumpkin and spice were relatively subtle, which was my preference, but a holiday enthusiast may have been disappointed. The real exclamation came from the frosting. From all of the places we’d sampled, Cake Flour’s frosting was the most airy and soft.

What a sweet, Sweet Surrender
Sweet Surrender at 1804 Frankfort Ave. had a few cupcake options and one healthy looking layer cake of chocolate and strawberry. We ordered a slice of the cake and a green tea chocolate cupcake. The cake and its frosting were very dense and heavy. Chocolate was the dominant flavor, while the strawberry was harder to detect. The green tea cupcake was rich and generously frosted, but the tea flavor was far too subtle for any of us to taste. The desserts here were the sweetest and best for more mainstream appetites.