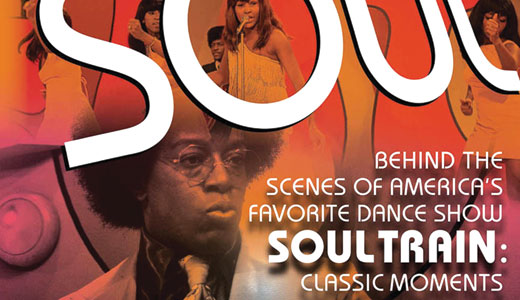 “Love, Peace, and Soul” is the first out of the gate in what is a busy quarter counting no less than three books about “Soul Train” and its creator and host, Don Cornelius. If Ericka Blount Danois has the lowest name recognition among the three (Questlove’s coffee table book and Nelson George’s critical analysis are up next), being first is a huge point in her favor.

“Soul Train” will forever be Saturday for me. After cartoons, you go out to play for an hour or so, but you have to be back on the floor in front of the television by 1 p.m. to see who’s going to be on this week, and play “that’s my car” with friends drooling at the gyrating ladies on the screen. The show’s later years are rightfully given short shrift in the book — once Cornelius left the hosting duties to a revolving door of hacks and the music became disposable — though the diehards and collectors will fawn over the appended list of all 1,117 original episodes and their guests, itself a veritable who’s who of soul, funk, disco and, eventually, if at first clumsily, hip-hop.

Even without a television show, Don Cornelius was the best-dressed man in the room; be it in early jobs as a sports anchor or radio newsreader, or late-night forays to Chicago and Los Angeles’ discotheques, Cornelius was a man who was somebody before he had the title or résumé to back it up. The Chicago-local “Soul Train” had barely begun before Cornelius decided to pull up stakes and take it nationally, almost instantly striking fear into Dick Clark’s “American Bandstand,” the show’s inspiration and competition.

“Love, Peace, and Soul” serves up great nostalgia. The rise of the series is recreated with interviews from people both onstage and off, with an appreciated lack of talking-head punditry. The story only reaches tabloid-level awkwardness on its ends: opening and closing with Cornelius’ 2012 suicide and the accompanying conjecture and tea-leaf reading that is inevitable from the fringe. Some shoddy editing late in the book blurs the timeline a bit, but only the geekiest of us music nerds get bunched up about such things.

Longtime fans of the show still debate over the best and worst dancer on the show and which ones we still claim we’ll marry one day. Danois lovingly details the stories of many of the favorites: Cheryl Song, Damita Jo Freeman, Lou Ski, Jody Watley, Jeffrey Daniel and Adolfo “Shabba Doo” Quinones. Cornelius was a reluctant father figure to many of “The Soul Train Gang,” some feeling spurned after their time on the show when that one-way relationship didn’t continue. Many of the dancers went on to film and theater and albums of their own, to be featured on a return trip aboard the “Train.” Richly detailed, “Love, Peace, and Soul” achieves its main goal and puts you back in front of that static-y, rabbit-antennaed Zenith, jelly dripping from a crustless peanut butter sandwich, waiting for the pronouncement that the hippest trip has begun.