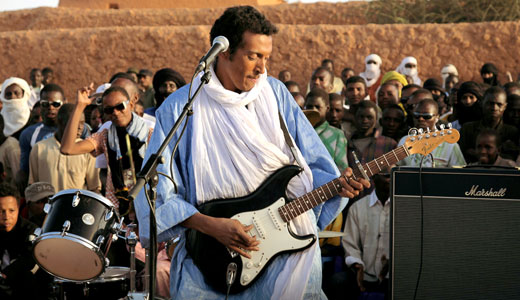 Omara Moctar is also known by his nickname, Bombino, which is also the name of his band. The 33-year-old guitarist, born and mostly raised in a nomadic Tuareg tribe in Niger, has already lived a life worthy of a book or a movie, full of way too many unique details to go into in this space (the man spent a week working with Angelina Jolie in 2008, for example).

In his youth, Moctar also lived in Algeria and Libya — it was in the latter where he was introduced to the guitar playing of Jimi Hendrix and Mark Knopfler. One world, indeed. After a stunning set at this summer’s Forecastle Festival, Bombino’s band is back for a show of their own.

LEO: Do you write your songs alone and then bring them to your band, or do they evolve from the band all playing together?

Omara Moctar: Usually, I will write my songs alone, but sometimes I have just a simple idea and it will develop as we play it together as a band. Mostly, though, the songs we play are songs I have written on my own, or they are adaptations of traditional Tuareg songs.

LEO: How is your latest album different from your first album?

OM: Well, the new album has a much stronger rock ’n’ roll sound. The last album, Agadez, was more relaxed and tranquil. This new album has much more muscle than the last one. (Producer) Dan (Auerbach) wanted to make the album sound like the live show, and, of course, my live show is much more big rock ’n’ roll than my first album.

LEO: Who do you think are the best guitarists playing today?

OM: That is a tough question. There are so many great guitarists of so many styles, it is very difficult to compare them. Santana is one of my favorites of my life and he is still with us, playing, so I will mention him first. I saw a guy named Gary Clark Jr. who I also thought was incredible. Vieux Farka Toure, the son of the great Ali (Farka Toure), is also a hypnotic player. So, yes, there are three guitarists who play very different styles that are all world-class.

LEO: Does your music ever put you in a trance while you’re playing?

OM: Oh, yes yes yes! Every time I am on the stage, I go into a happy trance. It is a deep, spiritual experience for me.

LEO: Are music and religion the same experience, or different?

OM: For me, they are very different. Religion will tell you how to behave in society and how to treat other people, as well as provide guidance about the spiritual world. For me, with music, there are no rules and no judgments, no right and no wrong. It is just joy for me.

LEO: A lot of young, middle-class Americans think you’re cool. Do you know what it is about you they respond to? Do you think you will be able to make them more aware of the part of the world you come from?

OM: Well, I hope that if they think I am cool and they enjoy my music, they will be curious to learn more about where I come from and my culture and our political situation. That is an important goal of what I am doing with my career. I think they like me because I play music they can appreciate, but I am very clearly from another world for them. So this is interesting. Like, for me, if I saw an American playing an interesting new style of Tuareg music, I would find this very intriguing.

LEO: How did you like Nashville when you were there to record? What do you think about all the parts of the U.S. you’ve seen?

OM: I really liked Nashville, but honestly, we weren’t able to visit much of the city. We were going from hotel to studio to hotel to studio almost every day. It was very hot there in June (2012), like back home. So it was nice to feel the hot sun of Africa in America. I have seen many, many places in America I really like. I love Portland and Seattle, California, Austin, Boston, New Mexico, Colorado … there are just so many cool places in America! It is really a special place.