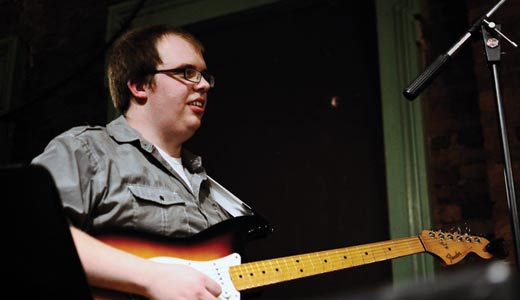 Pikeville native Brandon Coleman is a modern renaissance man: a talented and hardworking guitarist, composer, bandleader and sound engineer who has just released his first studio album, Decisions. He’s also a graphic designer — he did his album’s cover.

Coleman has swum in many pools of music. “While Decisions is classifiable as a jazz album, I wanted to include influences from my entire musical life,” he says, describing his journey from guitar masters Jimi Hendrix, Frank Zappa, Chet Atkins and Danny Gatton to prog-rock bands King Crimson, Yes, U.K. and Gentle Giant, becoming “obsessed” with contemporary composers Messiaen and Ligeti, and finally, jazz.

Coleman wanted to “capture the ensemble magic” with this lineup: Bruno Gafanhoto (drums), Luke McIntosh (bass) and Diego Lyra (keyboards), all of whom Coleman met and worked with as a graduate student at the U of L School of Music. “There are influences across the board on the album,” he says. “Brazilian music on ‘Rewind,’ based on a traditional Baiao rhythm; influence from harmonic techniques of Olivier Messiaen on the title track ‘Decisions,’ and more. The most important thing to me in the music itself, though, was the musicianship and friendship of the quartet.”

Coleman says “Geometry” was written during a sound check “in its primal form on the fly … Bruno and Luke had just set up, and they were playing this funny rhythm where Luke was always a tiny bit behind the beat. I instantly heard this set of chords that floated right over the groove they played, and I ran over to the piano and pounded it out! The melody came after about three minutes of jamming, and the bridge was penned as a rhythmic contrast.”

Coleman adds Pat Metheny as “a huge influence … I think his tone, feel and melodicism are what strike me most and creep into my own particular voice on the guitar. I think whereas a lot of modern guitarists … eschew the art of melodic playing in favor of more contemporary ideas, I like Metheny because he balances that well, which is something I strive for.”