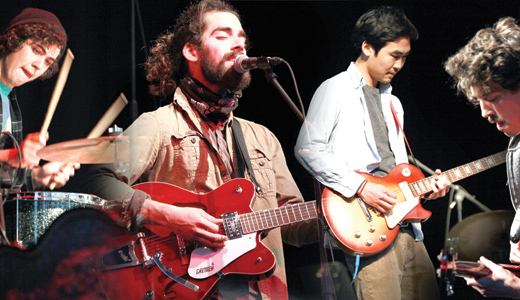 Those were the days

The men of Ranger have been playing music together since seventh grade. After years of “jamming on RHCP and Beatles tunes in basements and bedrooms,” they flirted with others before coming back together.

Now their debut album, The Bard, has been completed and will be released on Tuesday. Though the title is neither a reference to the famous playwright or the local theater/pub, bassist Michael Homan says, “We came up with the name The Bard because we really liked the idea of relaying stories through our music. The song ‘Storyteller’ kind of led us to the idea, and we liked it so much we named the album after it.”

Their collective influences range from early rock to Dr. Dog. Drummer Adam Faris loves the ’50s; lead guitarist Yuto Kanii goes for the beatnik sounds of folk and jazz, though he cites George Harrison and My Morning Jacket’s Jim James and Carl Broemel as guitar-spirations. Homan likes R&B “and boogie,” he says, adding, “Even though we all have individual preferences, we all appreciate similar aspects of sound: full harmonies, that heavy back beat …”

That blend of classic rock and harmonies influences songs like “Hope I Help,” which Homan says was fueled by the Beach Boys’ endlessly inspiring Pet Sounds album. “I loved what (Brian) Wilson did with his progressions and tried to emulate that in my fashion,” he says. “I’d have to say most of my influences are a few decades old, back when they really knew how to play their instruments. But I’m a sucker for catchy tunes, so I think, overall, I wrote it for people to move to.”

For guys so relatively young, they know their history, as well as the bigger picture of how far a band can take its songs. Ranger opened for their friends and New Albany neighbors Houndmouth last spring at Iroquois Amphitheater; both used the same inspiring local engineer, Kevin Ratterman, to record their debut full-length albums.

For Kanii, My Morning Jacket was “a high school obsession/discovery … MMJ taught me how to create a big sound and let loose.”