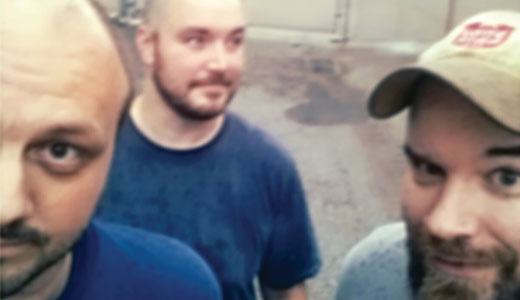 Brian Foor has been making some of the most challenging keyboard-driven music this city has likely ever seen, and he’s been doing it for years. Starting out as a drummer in bands such as Red Sun and Bodyhammer, Foor developed a love for keyboards that he first employed in the mostly instrumental punk/funk of Tyrone. Joined by Sean Roberts and Nathan Smallwood (half of Straight A’s) on drums and Warr guitar, respectively, Foor’s newest project, Asm A Tik, just released their first EP, Master Tape, on Noise Pollution.

The band initially formed as an extension of Foor’s solo music, but grew from there. “It all started out because I had an album’s worth of songs recorded and was thinking about putting a band together to play them live,” he explains. “Nate was helping me with guitar tracks on the album, and I asked him if he would be interested. He was down and suggested Sean might dig it. We got together and soon realized that it would be better to start from scratch and evolve as a band.”

Although currently instrumental, Asm A Tik may pick up a vocalist. Their sound is clearly shaped by their instrumentation, creating a distinctly prog rock-influenced project that defies conventional genre constraints. “I think being instrumental makes you more aware of trying to make it as interesting as possible,” Foor says. “We are constantly refining the music and trying to make sure nothing drags or runs on too long.”

Ever diligent, the band is already plotting what they anticipate to be a proper full-length record. “We are two or three songs away from having enough material for an LP,” Foor notes. “I think it’s a little more Moog-oriented than our earlier stuff. We record most of our stuff at home, and I think it gives us enough peace of mind to experiment more. I don’t think our songs follow any theme other than constantly trying new things and striving to not be repetitious.”

Catch them Nov. 30 at the New Vintage for the Gubbey Records compilation release.