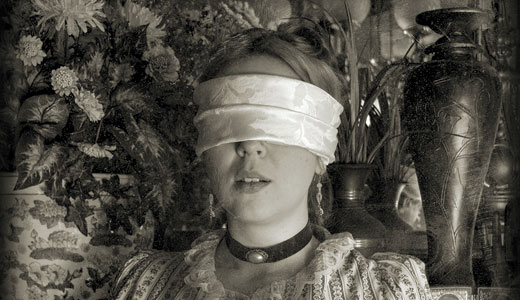 Bill Pusztai’s images were the first I saw upon walking into Garner Narrative on East Market Street. The images, all depicting the photographer engaging in one of the seven deadly sins, are accompanied by a detailed artist’s statement. Pusztai comments on the universal humanity of these sins, and their more complex definitions, and also briefly touches on the guilt often associated with committing a carnal sin. I found it intriguing that neither the work nor the statement reflected any concrete opinions held by the artist. To me, they seemed more of an open-ended question, brought up by the photographer but left for the viewer to answer. Does greed make you feel guilty? Does gluttony make you blush? How does sinning make you feel when no one else is looking? I strolled away, not carrying Pusztai’s opinions with me, but rather my own.

Turning toward the back wall of the gallery, I was intrigued by several small curiosities nesting on shelves. They happened to be a series of small ambrotypes created by local artist Mary Helen Yates. If you have at least a mild interest in photography, you’re likely to find the process almost as interesting as the images themselves. Ambrotypes were invented in the United States in the 1850s. Greek for “immortal impression,” they are made by first covering glass with a thin layer of collodion, next a silver nitrate solution, then finally developing and fixing them. The end result is a direct positive on a single sheet of glass. Images on glass always seem more precious than those on paper. There is a delicacy and gentleness conveyed when you permanently affix an image to such a breakable substrate. Yates’ theatrical and Victorian-themed images generate even more of a gentleness to the work. She takes this feeling further by adding tactile elements like velvet.

Aleksandra Stone, the third photographer featured in the “Moral Matters” exhibit, has been a Louisville resident since 1998. After fleeing the war-torn country formerly known as Yugoslavia, she traveled to Germany and finally the United States. Stone is unabashedly and refreshingly open about her struggles with depression, both with her statement and her images. Each of the black-and-white photographs depicts a different piece of her depression. They are an intimate and unique glimpse of the photographer’s raw emotion. One image, entitled “Broken Glass,” shows the photographer swathed in a beautiful white feather garment perched on the edge of a cliff looking out over the water. Her face is covered by a mask. The image itself is strikingly serene yet chaotic. The addition of broken bits of glass adhered to the piece adds a mesmerizing, textural element.

“Moral Matters,” which is part of the Louisville Photo Biennial, is sourced mainly from local artists and is small yet diverse. Ranging from quizzical to delicate to visceral, it leaves the viewer with much to remember.