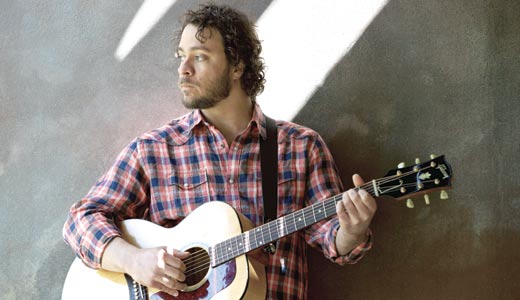 Amos Lee came out with a self-titled hit album nearly a decade ago that made people wonder where he’d been: Obviously, this was a veteran of the singer-songwriter scene. No neophyte could be getting so much melodic mileage out of the choices he made, touching on country instrumentation, arrangements that seemed to punch up styles right out of the ’70s, with particular emphasis on a Bill Withers-style of pop-soul.

It turned out Lee was, indeed, just beginning to explore his talents. Over the years, he’s worked on folk-ballad styles both relaxed and tense, occasionally utilizing a barreling or funky pace, and stretching easily toward topical tracks. He grew a diverse audience, and that’s how he likes it.

A couple of years ago, he released the fruits of sessions cut in the southwest with Calexico’s Joey Burns, more immersed in alt-country sounds. Now comes a Jay Joyce-produced album entitled Mountains of Sorrow, Rivers of Song, and it shows Lee once again finessing his sound.

The sound has more prominent country elements, at times — walking banjo lines and dobro punctuating layered electric guitar — but it’s just one facet of the artist’s restlessness. Some of the pairings of songs point toward Lee’s successful ranginess. “High Water” is intimate in point of view but apocalyptic in tone — practically a spin on “When the Levee Breaks” — but it lets the listener off at a roadside soul-shack with a wizened but bouncy song of devotion, “The Man Who Wants You.” The breezy folk-porch wisdom of “Tricksters, Hucksters, and Scamps” turns into the devastating acoustic living-room folk of “Chill in the Air,” with a clear eye toward post-breakup feelings.

LEO asked the singer-songwriter how the new sessions compare with those of 2004-2005:

Amos Lee: I was a lot more comfortable and experienced this time. I think some of the singing was a little more focused. It wasn’t as hard to get takes from me vocally than it was the first time. The first one, it took us two weeks to get decent vocal takes. This time, it was pretty much one-and-done on all of ’em.

Another big difference is that I used my live band this time. That’s a big difference, because those guys are some of my best friends. I think there’s a playful element and a looseness that wasn’t there the first time because of the camaraderie and the trust that we have in each other.

LEO: These tracks were recorded in Nashville. Being in Music City for that whole stretch — did it make for a different experience than other sessions?

AL: At this point, when I’m making a record, I focus on making a record. We go out and we enjoy the city and we meet people and have a good time, but what we’re trying to do is stay pretty focused on making music.

The same thing happened in Tucson (for the previous album). It’s not like you’re living there; you’re in the studio 12 hours a day. But you get to sort of hang out and get the lay of the land a little bit — it’s a great city, Nashville. The people are cool, it’s not too big, easy to navigate, and the level of musicianship there is outrageous.

LEO: How much do you change arrangements — say, with songs you’ve played for seven or nine years?

AL: Some songs — you tinker with the arrangement and they don’t like it.

LEO: You mean the audience?

AL: No … people are generally responsive to a thoughtful arrangement — but some songs don’t like to be messed with. No song is static. For the most part, it’s better to try to not change things for the sake of changing them. Keep them responsive with life. You want to breathe life into your shows; you want to make sure it’s not a stagnant situation. Those are good reasons to change arrangements — to keep them real and alive for you, and then hopefully for the audience as well.

LEO:Using your touring band as the in-studio musicians — an unqualified success?

AL: I thought it was awesome, actually. I think we really enjoyed each other’s company and respected each other’s ideas. That’s only going to get better, and that’s going to come onto the stage with us.

Amos Lee with Hurray for the Riff Raff