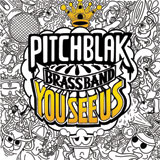 If we’re honest, most jazz-anything hybrids suck. By and large, it’s a genre best used as a base with smatterings of influence-as-flavoring, and not a jambalaya with noticeable chunks of “other.” Brooklyn’s PitchBlak Brass Band is a 10-piece group (eight horns!) that is as refreshing as it gets. Though none of the emcees hold a candle to Black Thought, comparisons to the Roots are inescapable if misguided. But for the lucky who saw 2007’s Roots and Brass Heaven shows, PitchBlak may serve as the next best thing. The unfortunately named “1988 Gregorian Swagger” begins a sequence on the record of musical perfection, as funky as it is nod-inducing. “The Light” with Jackie Morales will easily become their signature song and blends into “Ulysses” with ease, a reflective cut that lets you catch your breath after Morales’ soaring.