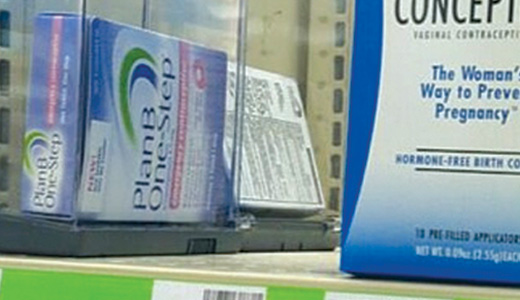 Imagine you have a headache. You visit the pharmacy down the street for some Tylenol, or maybe a cheap generic brand because payday isn’t until next week. You stroll up to the pain relief aisle, only to find bottles behind locked glass, with a “press here for assistance” button next to it. You look like hell and you’re not in the mood to talk to anybody, but you press the button and wait anyway. Some bored-looking cashier walks up, his eyes sizing you up on the way. When you tell him what you need, maybe he asks why you need it. Are you hungover? Were you out drinking last night? Are you even old enough to drink? Maybe he doesn’t have to ask all that. Maybe his eyes are judgmental enough. Who’d want to have a drink with you?

This scenario would never happen. Tylenol and other pain relievers are readily accessible on pharmacy shelves across the country. Staff doesn’t have to open a locked cage and hover while customers read labels and decide what to buy. Managers aren’t given the opportunity to lie about whom the product is for, or outright turn people away. Pain relief products just exist for purchase when they’re needed, no fuss attached.

Now imagine that instead of a headache, you are afraid you might get pregnant, and you want Plan B One-Step, the most common form of emergency contraception. Plan B and its generic brands prevent pregnancy mainly by stopping the release of an egg from the ovary, using levonorgestrel, the same hormone used in birth control pills. Though it is often referred to as the morning-after pill, Plan B can be taken up to 120 hours after unprotected sex and is most effective when taken within 72 hours.

Experts have declared Plan B safer than Tylenol, and for more than a decade, reproductive rights advocates have fought for the two to be treated as equals on retailers’ shelves.

A brief history: The FDA approved the first emergency contraceptive pill in the late ’90s. In 2003, two FDA advisory committees recommended it be sold over the counter without a prescription. In 2006, Plan B was made available over the counter to anyone 18 and older. Three years later, the minimum age was dropped to 17. Then, following years of complicated lawsuits, culture wars and politics — which included the unexpected twist of the Obama administration following its predecessor and blocking the removal of age restrictions — a ruling was issued on the federal level that removed all age restrictions to Plan B. The new rule went into effect Aug. 1.

Though it is an undeniable victory for women’s health, the implementation of the ruling is proving to be as messy as the road leading to it.

Rarely do the products we buy reveal such an intimate part of our lives. Emergency contraceptives are one of those that do. They suggest that someone recently had sex and now fears potentially life-changing consequences. For all but the most confident of people, there is shame, embarrassment and fear inherently built into that. Suddenly the minor annoyances in the opening anecdote — a common one among advocates — might seem like insurmountable hurdles. The fear of having to explain oneself, of being judged or of getting denied is enough to turn people away. It also opens the door for the misinformed and morally righteous to intervene.

Yet that is the reality of buying emergency contraceptives today.

LEO visited a dozen pharmacies throughout Louisville to see how accessible Plan B was to customers. At almost half (five), the product was not available on the shelf in the family planning aisle and had to be asked for. Three stores had handouts on the shelves instructing customers to take one to the counter in order to receive the product. Both handouts incorrectly stated that individuals under the age of 17 needed a prescription to purchase the product. One store had the product locked behind glass. Only three of the pharmacies or grocery stores had it available without any physical barriers.

Access gets worse outside of urban areas like Louisville. As part of its Reproductive Freedom Project, the ACLU of Kentucky last month contacted 40 pharmacies located outside of Louisville to determine how accessible Plan B is across the state. Results in Kentucky’s other urban areas — Lexington, Frankfort — were comparable to Louisville’s. More severe access issues arose within rural counties.

“What we found was that when you got into rural areas and small, independent pharmacies, they’re not offering it whatsoever,” says Derek Selznick, the director of the project. “Most didn’t want to talk (about why). We have talked to some who said they know (about the lifted restrictions), but (their customers) still have to show ID and they still need to ask.”

While some pharmacists might never be reasoned with, Selznick says the ACLU will be sending to all of them educational outreach letters that clarify what the most current rules are and urge them to comply.

“We can’t force anyone to do it,” says Selznick, “but the vast majority of pharmacists are ultimately concerned with health care. They want what’s best. They don’t want to judge people.”

Incorrect information is widespread. Head to Google and search for “emergency contraception louisville ky” — it’ll auto-fill those words for you; the phrase is searched for often enough — and the second result is a deceptive webpage from A Woman’s Choice, the sleazy local pro-life business operating under the guise of being a “special health clinic.” Their physical locations, intentionally located near downtown’s abortion clinic in order to confuse women, have a proven history of shaming women who walk in for consultations.

Conservative groups like these have propagated misinformation about how emergency contraceptives work and when a pregnancy medically begins. That hasn’t helped the general public’s understanding of the family planning tool. Neither does the fact that different rules now exist for different brands.

Only Plan B, the most recognizable option, had all age restrictions lifted from it this summer. The two generics on the market — Next Choice One Dose and Levonorgestrel Oral — are still only available without a prescription to women 17 and older. Anyone 16 or under needs a doctor’s signoff.

Dr. Tracey Wilkinson worries that all this inconsistency will confuse patients and the untrained staff working at pharmacies. Wilkinson, a pediatric doctor in southern California, authored a study published in the peer-reviewed journal Pediatrics showing that one in five U.S. pharmacies gave teenagers incorrect information about Plan B — and this was back when Plan B had the same age restrictions as its generics. Young women who identified themselves as 17 years old were frequently told they could not buy Plan B over the counter. Some were told they could not obtain emergency contraceptive under any circumstances. Half of the phone calls during Wilkinson’s research resulted in some misinformation being delivered. These incidents were more likely to occur in poorer neighborhoods.

“Now that there are more rules, this has likely augmented,” Wilkinson says. “People who aren’t pharmacists are now interacting with customers in a very private moment. It is just cashiers often.”

As a result, the pediatric doctor continues the practice of writing “just-in-case” prescriptions for her patients. Timeliness is crucial to the success of Plan B, so these standing prescriptions allow a woman to immediately obtain emergency contraception without having to schedule an appointment with her primary health care provider. Professional health care associations, including the American Academy of Pediatrics, officially recommend the practice.

Having a prescription also reduces costs for customers. The Affordable Healthcare Act mandates that providers must offer birth control, including Plan B, without charging copay or additional fees.

The number of women who visit the Planned Parenthood of Indiana and Kentucky (PPINK) health center, located on Second Street, seeking emergency contraception is typically five to seven a week. That number hasn’t changed since the Plan B age restrictions were removed just over two months ago.

Latoya Rose, the health center manager for both the Louisville and Lexington branches, says that’s because many of their clients cannot afford to pay the shelf price for emergency contraceptives. The average cost for Plan B One-Step is $48 a pop. The generics are about 20 percent cheaper, at about $41 each. Even the generic can present a major hurdle for low-income earners. Planned Parenthood charges on a sliding scale based off income.

Planned Parenthood only carries a generic, meaning teenagers aren’t able to buy Plan B directly as they should be able to in a pharmacy. Still, they can do a walk-in appointment and get a prescription in the same day. It’s one extra step for a product ironically called One-Step.

The FDA’s ruling this summer gave Plan B the exclusive right to be sold without age restrictions for three years, which means it won’t be until 2016 that the cheaper, generic emergency contraceptives can even apply to have their age restrictions lifted. In the meantime, advocates of reproductive justice will continue to stress the importance of emergency contraceptives as a key tool in preventing unwanted pregnancies and fighting for better access, particularly for the economically disadvantaged.

About half (49 percent) of the 6.7 million pregnancies in the United States each year are unintended, according to the Guttmacher Institute. Teenagers, low-income earners and minorities are disproportionately affected. In 2008, 46 percent of all pregnancies in Kentucky were unintended, and 78 percent of those led to publicly funded births. That amounted to $76 million in state funds and $172 million in federal government money, mostly through social service programs.

So, advocates say, if not for the preservation of freedom and choice for women and their families, there’s a bottom-line dollar value motivation, too.

This story is part of the Reproductive Justice Reporting Project, an initiative of the Media Consortium in partnership with the Association of Alternative Newsmedia, made possible with a grant from the Quixote Foundation. For more information, visit whereisyourplanb.com.