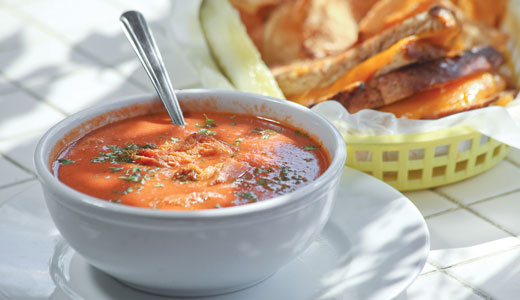 I’d like to sing the praises of Shady Lane Café, but I expect that café owner Susi Smith, an outstanding professional singer, could warble it far better than I; and her husband and co-owner Bill Smith, who’s not only a mean hand on the short-order grill but also a poet of some repute, could probably sling some better verses on the topic than I, iambic pentameter or free verse, either way.

But that being said, I’m standing in this pulpit and they’re not. So let me just say that Shady Lane Café has been a favorite for quite a while, and judging by the crowds that pack in daily and the applause that comes in from all over, it still is.

Recently, the gang over at Louisville Magazine gave Shady Lane a standing O for its Brownsboro Burger, a feat that Bill wasn’t loath to trumpet on the LouisvilleHotBytes.com Forum and the eatery’s Facebook page: “Okay guys. Which burger beat out 34 other restaurants in Louisville, including MilkWood, Mussel and Burger Bar, Jack Fry’s, etc. to reach the Top Four best burgers in Louisville Mag? You guessed it, SHADY LANE!! Susi and I are honored and we have you to thank.”

At which point, what could we do? Mary and I just had to go over and have a piece of that burger — and more — for a nourishing midday repast.

If you haven’t been by, it’s not that hard to find, tucked into a corner of the Brownsboro Center shopping strip on Brownsboro Road just inside the Watterson Expressway, next door to the big Party Mart liquor store and just down the way from Gasthaus German Restaurant and the newish Henry’s Place.

This is an older shopping center, dating back to the Baby Boom years and early suburban sprawl, a place where what we remember as new is starting to look a bit venerable, in a good way. So, no mere storefront, Shady Lane presents a delightfully jumbled neighborhood-diner scene with its tight quarters, steep stairs up to extra seating space at the back, and tchotchkes all over the place on walls the color of Dusseldorf mustard.

Walk in at lunch time, which is pretty much the only time you can walk in, as they’re open only 11 a.m.-3 p.m. Tuesdays through Fridays, starting a bit earlier on Saturdays to allow a pleasant breakfast or brunch from 8:30 on.

The menu is chalked on a blackboard behind the busy counter, where Susi takes the orders and greets just about everyone as a new, old or just-about-to-be friend while Bill backs right up to her as he artfully griddles, smothers, covers and enacts many other short-order verbs on a classic flat-top grill. (If Susi discovers that anyone in the room is celebrating a birthday, look out! She’ll likely bring all conversation to a halt as she belts out a familiar celebratory song. It’s that kind of place.)

The menu may change, in part — that’s how blackboards work — but you can count on the diner basics, plus a few not-so-diner items Bill seems to throw in just to mix it up. The other day, the board contained about 15 selections, ranging from $5.50 (for grilled cheese) to $8.50 (for the Shady Lane Club or a not-so-traditional diner goodie, a chicken quesadilla). The recently honored Brownsboro Burger was $6.25, a similarly dressed veggie burger a quarter more. Quite a few items, from Philly Beef and Swiss or a New York Reuben to an Italian Sub or Benedictine-Bacon Wrap, come in at $7.75.

The dessert menu is found in the old-fashioned pie cases lined along the front of the counter; the other day, Susi was recommending sweet potato pie or a splendid rendition of seasonal pumpkin pie.

The Brownsboro Burger — ordered with cheddar, lettuce and tomato, no mayo — was an award-winner, all right. No assembly-line burger here; these are made with attentive care and short-order skill. A good-size portion of coarsely ground beef is hand-formed into a thick pattie, then gently grilled — not too much pressing down to waste the juices — topped with a slab of sharp cheese just long enough to melt. It was dressed with a thick-cut ripe tomato, leaf lettuce, red onion and thick dill pickle rounds on a decent grilled burger bun with a dill spear and crisp tortilla chips on the side. OK, it might have been a skosh past medium-rare, but it remained succulent and juicy.

A grilled cheese sandwich significantly exceeded the iconic lunch-counter version, with your choice of cheese (my choice, sharp cheddar) expertly grilled on crisp, textured multi-grain bread. It was delicious with Shady Lane’s take on tomato soup, a fresh, simple puree of tomatoes and basil. Another soup, black bean, could have passed for chili with its thick, stick-to-your-ribs texture and haunting scents of cumin and chili spice.

The pumpkin pie made a fine finish with its flaky, short crust, rich filling and dab of whipped cream on top. With a cola and iced tea, lunch for two came to $28.62.