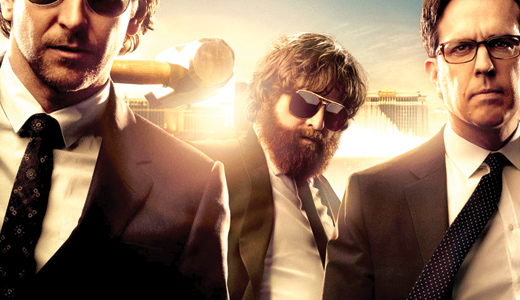 Will Smith created this exciting chase film as a starring vehicle for son Jaden, who spends most of the time running from packs of wild CGI animals (and plants!) in the lush, merciless forests of a future Earth, trying to rescue his venerable butt-hole father. Oh, and there’s an unstoppable alien creature in the mix who can smell fear. Jaden will surely need psychological help one day, but it still makes for a rousing bit of macho sci-fi nonsense, aimed squarely at kids but with a lesson for parents as well. What lesson? First off, M. Night Shyamalan isn’t nearly as bad a director as you’ve heard.

Bradley Cooper, Ed Helms, Justin Bartha and Zach Galifianakis return — along with indestructible Ken Jeong — for the third and supposedly last chapter in this hit “drunks run amok” series that has spawned a generation of imitators. Here the filmmakers do away with the cool flashbacks, instead leading the Wolfpack down a dark, criminal road where they find John Goodman, as threatening as ever. The internal chemistry of the friends is about all that stands between themselves and disaster, that and a little help from Heather Graham, Jeffrey Tambor and Melissa McCarthy. Not the best in the series, but a nice place to end it.

A stirring look at 50 years of environmental activism. With mega-corporations now controlling our news outlets, it’s easy to be ignorant of just how wretched — and short! — our lives would be without the constant work of environmentalists who have literally fought and died to protect our world. But there have been massive tragedies, many of which you’ve been kept in the dark about. An urgent and exciting look at our stewardship of this fragile world. Recommended.

AWKWARD: SEASONS ONE AND TWO

Ashley Rickards is both hilarious and suitably embarrassed as the cute 15-year-old high-school nobody who suffers an accident, putting her in a neck brace and stick-out arm cast. Then the rumors start: Were her injuries the result of a suicide attempt?! Suddenly, she’s incredibly popular — the most talked-about girl in school. How’s she supposed to deal with that? First two seasons of a great original series from MTV, now available at a great price.

DOCTOR WHO, STORY 80: TERROR OF THE ZYGONS

Another great classic Tom Baker outing as The Doctor, with Elisabeth Sladen as companion Sarah Jane Smith. They rush to Loch Ness when a number of oil rigs are attacked — and find Nessie under the control of the evil Zygons, an alien race living at the bottom of the Loch, preparing to take over the Earth. This is one of the best Doctors ever: from the clever amphibious costumes to the hokey hand puppets to the great script by BBC stalwart Robert Banks Stewart. The perfect place to begin your Doctor Who collection.

The best thing about these 23 episodes — other than the simple fact that they are “Family Guy” — is that they’re all uncensored! You can finally see all of Seth MacFarlane’s most outrageous gags the way he intended, including many previous-season episodes the studio has refused to release up to this time. And the angry chicken returns! Great stuff.

Raquel Welch in a wetsuit! Donald Pleasence eaten alive by a white blood cell! Raquel Welch in a wetsuit! Wow! What more could you want in a movie? Scientists shrink a nuclear-powered surgery submarine to microscopic size and inject it into a dying man. (In the Spanish remake, it’s a suppository. Just kidding.) Now available in a great, clear Blu-ray with all the trimmings. Recommended.

This 2012 Cannes Film Festival winner from Xavier “I Killed My Mother” Dolan is beautiful, both to look at and to savor for its soundtrack. The titular Laurence is a Frenchman perfectly happy with his life. He has a great girlfriend, is about to be published and enjoys his job. Then he tells the girlfriend he wants to be a woman. But rather than the end of their relationship, this is just one of their many interactions as the movie tracks their lives throughout the 1990s. A truly exceptional film.

Greg Kinnear is a divorced guy who still obsesses over his ex-wife (Jennifer Connelly), despite the frequent carnal efforts of his neighbor, Kristen Bell. Meanwhile, daughter Lily Collins has her own relationship problems, as does son Nat Wolff, who is dating Liana Liberato (Tristan from “Sons of Anarchy”). OK, that’s four of the most beautiful women we’ve ever seen, and they all live on the same street! We checked Google: It’s apparently nowhere near here. Or reality. Good little romantic comedy-drama.

This thriller, about a housebound family fighting for their lives during a 12-hour “Purge,” when laws are null and no crime is punished, is a bit idiotic, but it makes for a nice bit of rough escapist nonsense. Ethan Hawke and Lena Headey lead the cast as Mom and Dad, with Max Burkholder and Adelaide Kane as the kids. They all seem safe enough until Edwin Hodge (2012’s “Red Dawn”) stumbles, bloody and beaten, into their midst — and the rest of America wants him dead.

A street drug called “Natas” (read it backwards) turns everyone into cannibalistic flesh eaters. Our hero, Martin Copping, spends his days drinking and blasting baddies from the seat of his old Camaro (the professional’s choice) until he discovers a small band of survivors led by a priest named Jesus — played by Danny Trejo! — who carries an axe and offers him redemption. OK, so it’s just another low-rent battle in zombie hell, but we liked it.

When “AmDad” first premiered, we figured the shock factor would wear out in about two seasons — but we underestimated just how outrageous creator Seth MacFarlane could be. As CIA nut-job and suburban family guy (oh, wait, isn’t that another show?), Stan Smith continues his never-ending war on peace, quiet and rational thought while wife Francine battles a killer hot tub, son Steve forms a boy band and becomes way too attached to his lucky panties, daughter Hayley goes on a date with Snot, Klaus the goldfish trades bodies with Stan, and alien grey Roger becomes a pro wrestler. Ya gotta be impressed.

DOCTOR WHO: THE DOCTORS REVISITED 5-8

A look back at the careers of The Doctors from 1981 to 1996, those starring Peter Davison, Colin Baker, Sylvester McCoy and Paul McGann. We never cared for Davison or Baker, but comic Sylvester McCoy (Radagast the Brown from “The Hobbit”) revitalized the show and the character nearly as much as Tom Baker or Matt Smith. During his tenure, the Daleks were resurrected — and repelled — amid a flurry of explosions, chases, now-patented pseudo-scientific patter, and no small measure of physical humor. Includes complete episodes “Earthshock,” “Vengeance on Varos” and “Remembrance of the Daleks,” plus “Doctor Who: The Movie.” A must-own.

We are real fans of “real” science fiction — that is, speculative tales based on hard science, a genre that is often difficult to find. That’s why we liked this beautifully made look at a real possibility: The potential for alien life in seas beneath the icy crust of Jupiter’s moon Europa. In an ode to Kubrick, the filmmakers led a manned mission to there go all to hell, with the hint of a big payoff at the end. Talky by some standards, but a morsel to be relished by those of us tired of SyFy dreck. Stars Sharlto Copley (“District 9”), Embeth Davidtz and Michael Nyqvist (“Dragon Tattoo”).

NOTHING LEFT TO FEAR

Horror vet Clancy Brown shows up in this fun little “closing the gates of hell” outing based (supposedly) on the actual folklore of Stull, Kansas. James Tupper from “Grey’s Anatomy” is the new pastor in town, introducing his family to small-town life and the usual demonic plots. Watch for Anne Heche, Jennifer Stone (“Wizards of Waverly Place”), plus blonde knockout and burgeoning scream-queen Rebekah Brandes. Definitely worth your time.

Seth Green and Matt Senreich continue to make some of the dumbest — and funniest — low-budget computer-animated/stop-action/live-action sketch-comedy ever imagined using off-the-shelf action figures. Our favorite episode this season was “Crushed by a Steamroller on My 53rd Birthday,” though any attempt at explaining why would be futile. Twenty 11-minute episodes of absolute lunacy, plus hours of bonus goodies. Just do it.

Stanley Kubrick didn’t have many failures, but 1975’s “Barry Lyndon” was definitely one of them. He decided his next project would be a sure-fire hit: a horror film. And thus was born both Stephen King’s “The Shining” and a legion of slavering fans who are convinced that the movie contains secret messages on everything from the slaughter of Native Americans to UFOs. This doc looks at such devotees and their twisted logic — some of which makes way too much sense! Recommended.

Soaper Danielle Harris is terrific in this underrated “serial killer toys with his next victim” thriller, with Casper Van Dien as a cop, and Quentin Tarantino’s go-to guy, Australian John Jarratt, as the baddie. We liked how it built the suspense and terror over the first hour, with Danielle becoming more and more unhinged as Jarratt ratchets up the horror. The climax really delivers.

THOMAS & FRIENDS: KING OF THE RAILWAY THE MOVIE

While we liked the old stop-motion outings, these fresh CGI-animated train adventures are still fun for the wee one and guileless for adults. This one-hour excursion finds Thomas the Tank Engine and friends (including some of the first-ever girl trains!) entertaining a royal guest, launching them on a shining knight-errant adventure where one of their number goes missing and they learn that being old does not mean being useless. Great stuff.

The never-ending war between the Autobots and the Decepticons continues with Unicron’s consciousness infesting the carcass that was once Megatron, now bent on the destruction of their home world. But this combination is too evil and powerful for even the Decepticons, who join forces with the Autobots for the biggest battle in robo-history.

WITH LOVE … FROM THE AGE OF REASON

This is a sweet, harmless bit of romantic nonsense about a high-powered female exec whose life is thrown into turmoil by the arrival of a stack of letters which she had written to her future self at the age of 7. Yeah, it’s a big-ol’ chick-flick, made palatable by the presence of the beautiful Sophie Marceau (007’s “The World is Not Enough”).