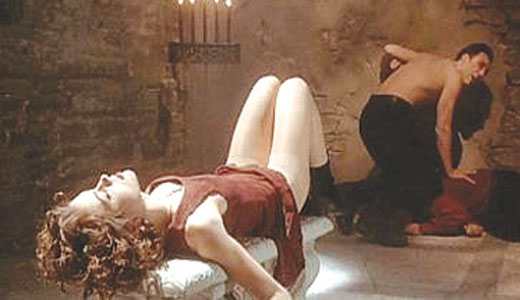 Pretty, pouty little Alyssa Milano, whom we all watched grow up on TV’s “Who’s The Boss?,” body-slammed into puberty with pretty, pouty, pointy little results in this brain-dead virgin-and-vampire boobfest. Her left mamm gives the kind of bravura performance that only a seasoned performer can aspire to, while the right one just lays there, providing no support whatsoever. Gangs of where-are-they-now fun, this thing is a Halloween staple around our place.

Blonde hottie Sharon Hinnendael is 27 but looks much younger in this reboot of the movie that made Alyssa Milano a mainstay of ’90s titty movies. She’s an incoming college freshman with a drug problem and a rough backstory, despite graduating from a Catholic girls’ school. But her fresh start is being blocked by a teensy problem: One of her professors is a vampire who, like most profs we’ve ever met, wants to make her his slave. But this isn’t the usual helpless virgin! Ultimately she will decide her own fate, thank you very much. We liked it.

The immortal Mario Bava directed this classic Italian horror anthology as “The Three Faces of Fear,” but it was renamed and edited for content (including hinted-at lesbianism) by AIP for wimpy British audiences. This new name was later appropriated by Ozzy Osbourne and friends. Really! Now available from Cheezy Flicks: the original Italian-language version, subtitled and far more terrifying than what you may have seen before, with the wonderfully textured and spooky original soundtrack. Boris Karloff stars in the best-known segment as a wild-haired vampire. Truly frightening; our highest recommendation.

Thirty-something years from now, the Earth has been visited by and terraformed for a series of alien races, decimating the human population who now crawl like maggots among the ruins of former cities, presided over by lawless feudal lords. Grant Bowler and Stephanie Leonidas arrive at the ruins of former St. Louis just as conflicts begin to boil over from all sides. Yeah, this idea has been tried before on TV, but this one seems to be jumping the pitfalls and aiming for a quality dystopian sci-fi drama for adults, with just enough vidgame elements to appeal to the social media crowd. Surprising, smart and addictive.

LAST OF THE SUMMER WINE: VINTAGE 2000

Can you name the longest-running comedy series in England? It’s this silly-nanny bunch of fluff and nonsense about a trio of old guys from Yorkshire who have simply never grown up. The year 2000 (after 27 friggin’ years on the air!) finds the leader of the pack, played by Peter Sallis (the voice of Wallace from “Wallace and Gromit”), leading them back to France to honor their WWII dead. If that doesn’t sound hilarious to you now, it will once you see how much trouble three old farts can get into! A gentle yet wonderfully funny look at life.

Guillermo del Toro, a man truly in love with movies, takes the juvenile “big robots vs. giant monsters” cartoon genre and does it up like nobody else could (or would). Earth finds herself being attacked by Godzilla-ish monsters from another dimension, and humanity’s last hope lies in a handful of giant, nuclear-powered automatons guided by twin pilots. But the joy here is not in who it stars or the plot: It’s in the way del Toro has so completely captured the essence of the genre. Despite decades of evolution, he has realized it perfectly. From the eye-popping visuals to the dialogue to the plot to the characters, this is movie as celebration — not simply product to satisfy corporate shareholders. Perfect.

Gillian “X-Files” Anderson will actually make you forget about Agent Scully in this excellent and original British detective series set in Belfast, previously seen on Netflix. She’s on the trail of a serial killer, played by Jamie Dornan (“Once Upon a Time”), who is on the trail of his next victim — clearly aware of the she-hound-sniffing at his heels. Seeing this pair of hunters circling their targets, tightening their respective nooses until they are within striking distance is brilliant and very creepy. And let’s just say it: She looks damn good here, if deliberately cold and distant.

Right up front: Most modern comedies leave us cold. But we let our wives pick the movie one night and ended up at this Sandra Bullock/Melissa McCarthy chick-cop buddy flick. We endured two hours of women yelling at each other, any nearby men, children, cats, relatives, good guys, bad guys or gay guys. It gave us a headache — but the females in the audience seemed to be experiencing comic orgasms with each pratfall or insult. Apparently, we weren’t the target audience, but our partners left happy and spent, repeating each put-down as if it were Shakespeare. We didn’t get it, but now you can on DVD and Blu-ray.

In the 1959 classic “Have Rocket – Will Travel,” a scientist invents a way to produce cartoons directly from live-action for the Three Stooges — decades before the term “motion capture” was invented! We don’t know if they used that technique in this 1965 cartoon series, but the characters sure look the same. Larry, Moe and Curly Joe provide the voices for 156 rarely seen animated shorts and perform the live-action “wrap arounds” that accompanied them. The set also includes a CD of related sing-alongs and Christmas songs. A must-own for any working Stooge.

Aka “The Rental,” this is no-budget indie horror as it was meant to be. A quartet of very attractive college girls moves to a place off-campus. Unbeknownst to them, it is owned by a bloodthirsty landlord who, like most landlords, feeds off the souls of “evil” women. The only protection from this otherworldly threat? To be pure of heart. They’re dooooomed. Worth checking out.

The final season for our too-attractive-to-believe West Beverly high-school grads as they look for love, life and a J.O.B. after a lifetime of wealth and privilege. We have to admit, for incredibly rich, beautiful, young people, they sure do have a lot of sex. Oh … is that how that works? Anyway, the CW canceled the show before filming a season finale, so the last episode doesn’t wrap anything up, leaving the door open for a 90210 movie. Or maybe not. A guilty pleasure that will be missed.

We first suffered through this damn purple monstrosity back when our kids were, uh, kids. Now that at least one of them is married we revisited Barney recently and found the movies to be an improvement over the first-gen outings. They’re not Shakespeare or anything, but we didn’t feel like throwing things at the screen, either. Our fave in this set is “The Land of Make Believe,” with a simple “trip to imagination” plot and fun visuals. Also contains “Let’s Make Music” and “Night Before Christmas”; makes a great gift.

Directed by the always reliable Johnnie To, this tale of a powerful drug lord who stupidly crashes his car, exposing him to a crusading anti-drug cop, is a first-rate Chinese nail-biter, one of the best underworld dramas we’ve seen in years. The script is nuanced, as are the performances of Sun Honglei and Louis Koo, the latter of which plays the bad guy who rats on his deadly friends to avoid the death penalty. Or has he simply exchanged one penalty for another? Brilliant but brutal.

Since many of the first-generation Gleeks graduated or moved on at the end of Season 3, this season saw a marked change in the show’s direction. Rachel (Lea Michele) and Kurt (Chris Colfer) move to NYC while Finn (the late Cory Monteith) heads off to the Army. Back at school, things are more familiar, even if much of the cast isn’t, with new underclassmen coming in and facing new challenges, while another clutch of high-dollar guest stars entertain. In other words: It’s more “Glee”! What more could you want?

This complete set of Seasons 1 and 2 comprise the entire run of the original 1983-85 animated series, with Don “Get Smart” Adams voicing the world’s first bionic police inspector, a bumbling, loveable and kinda dim semi-robotic supersleuth who seems blissfully unaware that the crimes are actually solved by his niece (Cree Summer) and her dog, Brain. A guilty pleasure from two decades ago, we used to watch it with our kids, who would fidget and squirm waiting for Chief Quimby to get blown up. That was a running gag — one of many — that never failed to set them squealing. A fondly remembered bunch of slapstick and nonsense like they just don’t make anymore — completely free of merchandising! Also available as four separate volumes for about $25 each; highly recommended.

Finally available on Blu-ray, Danny Kaye’s funny, song-filled, Oscar-nominated ode to cabarets, romance and the “Prince and the Pauper” tale. Squeezed in between making “The Inspector General” and “Hans Christian Andersen,” he plays a singer who does such a great impersonation of a wealthy man that the man hires Kaye to fill in for him at a party. But the rich man has both a wife (Gene Tierney) and a cadre of beautiful mistresses who all fall for the disguise — just as Kaye falls for the man’s wife! Great stuff.

Kevin “Dawn of the Dead” Zegers stars with Laurence Fishburne and Bill Paxton in this dystopian look at the near future where climate change has doomed us all to live in a frozen wasteland, isolated from each other for our own protection. When Zegers and Fishburne receive a distress call, they set out for a nearby colony to find … something. We won’t spoil the surprise, but at first we thought this was degenerating into another damned zombie movie. Wrong. Not the greatest flick ever made, but how can argue with Laurence Fishburne?