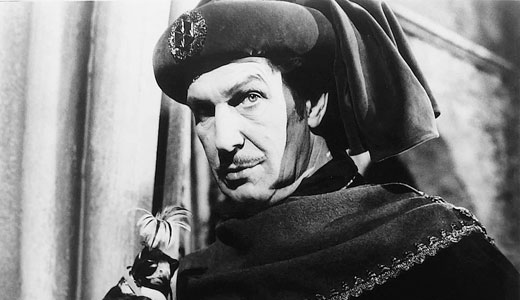 Patrick Wilson and Vera Farmiga star as famous married paranormal investigators in this based-on-real-events spooker from the director of “Saw” and “Insidious,” resulting in one of the most entertaining haunted house films of recent years. It starts with the usual clichés: creaks, moans, scary dolls and the like, building tension slowly in the best of old-school traditions. But when it all lets loose — Katie, bar the door! — there’s a glorious explosion of otherworldy frights guaranteed to leave you spent and clinging to your date, and all without a single juvenile jump-out-and-go-boo moment to spoil the tension. Terrific; a new modern classic.

We usually avoid plugging compilations, as they tend to be crap — but this one is simply brilliant! Six of Price’s very best. Beautifully restored. On Blu-ray. With excellent bonus goodies, many of them never seen before. Includes the Roger Corman masterpieces “Fall of the House of Usher,” “The Haunted Palace” (based on Lovecraft; co-starring Debra Paget), “Masque of the Red Death” (arguably Price’s best movie ever), “The Pit and the Pendulum” with Barbara Steele, and the ruthless British-made “Witchfinder General” directed by Michael Reeves, along with the “Witchfinder” American version, “The Conqueror Worm.” The perfect Halloween boxed set; our highest recommendation.

The third outing in Richard Linklater’s “Before” series again stars Ethan Hawke and Julie Delpy as the couple we first met in their 20s in “Before Sunrise,” maturing into their 30s in “Before Sunset,” now in their 40s and on a writer’s retreat in Greece. They desperately long for a night of sweet passion, but a question seems to be in the way: How can they enjoy relishing the past when they don’t know what their future holds? That rarest of creatures: A movie about adults for adults by adults.

What an amazing bunch of crap! Danny “Machete” Trejo is a very-bad-guy biker-gang leader who gets killed by his own men, waking up in hell where the Devil — Mickey freakin’ Rourke! — offers him a deal: Deliver the souls of the six men who killed him and he can escape a fiery afterlife. This is Trejo at his simple, bloody best: a possessed soul with nothing to lose on a fast-paced brutal rampage. With Anthony Michael Hall as the lead killer and sexy Dina Meyer as one of only two woman credited in the film, the other being Romanian blonde Catalina Grama.

If you don’t recognize the name, Tomi Ungerer is the French author of more than 140 books in the past 70 years, most of them for children, including some of the most subversive, enlightening and thought-provoking works ever made. This doc looks at his career via brilliant animation that combines his own clever artwork with the historical, sexual, political and very personal touchstones that make him such a fascinating figure. Highly recommended.

IN A TOWN THIS SIZE

Bartlesville, Okla.: a town like any other during the ’60s and ’70s? Let’s hope not, because Bartlesville was the center of a widespread culture of child sexual abuse that went untreated — if not uncovered — for decades. This doc is straightforward, largely a collection of first-person interviews with the families, social workers and victims, relating how such institutionalized horror can continue — and in many cases be condoned, even justified! — for generations. Brutal.

A fictional work based on the life of writer Louis Sarno (“Song from the Forest”), here portrayed as an ethnomusicologist — a scientist studying the role of music in society — who leaves New Jersey to spend 25 years living with the Bayakas, a tribe of Pygmies in Central Africa. If you’re expecting a creepy, condescending look at a “primitive” people, you will be disappointed, because this is a cutting-edge celebration of humanity, a peek into the soul of our world, an airing of the glorious music that binds us all together and how the love of a teenage girl can bless a man’s heart. Surprising, original and uplifting.

This vanity project from Vince Vaughn and Owen Wilson is an entertaining, if shallow, mess aimed at teen techno-freaks whose smartphone is permanently glued to their hand. The two play salesmen who lose their jobs to technology and decide to prove their cleverness by scoring an internship — and maybe a job — at Google, the hive of cutting-edge computer tech and the Holy Grail of nerds everywhere. Once there, they have to outsmart the hot, young geniuses to keep the sham going. It’s not a bad film; it just didn’t hold our interest (of course, we may not be the target audience) and was largely populated with geeky teen boys, with Rose Byrne being the only notable exception. But what do we know? We still have a land line!

THE WAY, WAY BACK

We love coming-of-age movies, and this one rawks. Shy 14-year-old Liam James is on summer vacation with his mom, Toni Collette; her ass-boyfriend Steve Carell; and his cute-as-a-bug daughter, Zoe Levin. It’s a drag until he meets half-crazy water-park manager Sam Rockwell, who helps him find the happiness within and the courage to get his life in gear. Smart, emotional and damn funny, this brilliantly scripted film features a first-rate cast including Maya Rudolph, Allison Janney, Amanda Peet, AnnaSophia Robb at her breathtaking best, and Rob Corddry from “Children’s Hospital.” Don’t miss it.