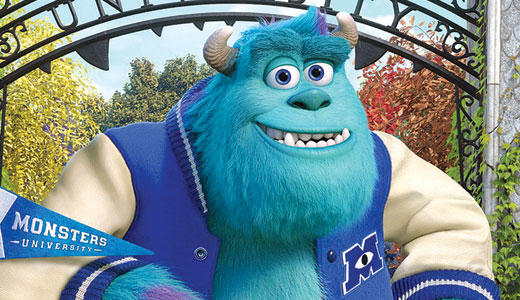 Louisville lass (and secret crush) Jess Weixler, who was so great in “Teeth” and appears as Robyn on “The Good Wife,” stars in this quirky indie comedy. She’s a former law student, unsure what she wants to do with her life, trying to get through her boyfriend’s birthday without sobering up too much. Unfortunately, she’s also stuck working inside a crappy ice cream truck surrounded by that most hideous of all things: people. It’s an earnest little work of love by young filmmakers, but Jess makes it all seem so much bigger — with help from Jesse Eisenberg, Jason “Gravity Falls” Ritter and Tippi Hedren! Best of all, you can win a free copy courtesy of LEO and Anchor Bay Entertainment! Just go to videotapeworm.com/video.php and click “Free Stuff” to register. You’re welcome.

This prequel to “Monsters Inc.” is a screwy, funny, welcome addition to the canon, with Billy Crystal and John Goodman returning as best-friend monsters, showing how they first met. This happens, of course, as many friendships do, at good old MU, where promising Scarers go to learn their craft. Crystal’s obloid Mike is having trouble fitting in, and Goodman’s lumbering Scully, who makes it all seem effortless, isn’t helping. So they become ever more competitive, to the point they are kicked out of the Scarer Program. It’s not until they join forces that they come to understand how important their friendship is to success. Lots of heart, just like the original, with silly sight gags and visual puns at every turn. Wonderful.

This made-for-Fox-TV tale is the fifth in the “Home Alone” franchise, though few of them have really had much to do with the original except a combination of crooks and kids and painful homemade booby-traps. A 10-year-old believes his new home is haunted, but the sneaky truth is that Malcolm McDowell and cronies are on the hunt for a priceless painting. When his parents leave him and his older sister home alone one night, the crooks strike — but the kids are ready for them! You know the rest.

Oh, no! The nefarious Dr. Claw has dropped Santa down a sewer and broken all the toys for the good little girls and boys! This looks like a job for the world’s only bionic detective, Inspector Gadget, and his whip-smart niece Penny! Don Adams returns to voice the bumbling trench-coated sleuth he created back in 1983 in this, the only seasonal Gadget animated mini-movie. Start a new X-mas tradition.

Martin Compston (“The Disappearance of Alice Creed “) stars in this blistering British cop drama as the head of a police anti-corruption unit, a demotion of sorts after mistakenly shooting a suspect. Whoopsie! Assisted by a Detective Constable (Vicky McClure), they focus on the alleged corruption of a Detective Chief Inspector (Lennie James of “The Walking Dead”) — and here’s where the show really shines. James plays his character as a smart, seasoned cop who knows how to get things done, pushing the envelope until you can’t decide whether he’s a hero, a villain or something far worse. A smart, brutal thrill ride for thinking adults.

This Canadian-made comedy-drama has lots of heart. Nicola Correia Damude from “Haven” charms as the lesbian Mexican nanny, watching over the daughter of a smarmy yuppie power couple (Patrick McKenna and Claire Lautier) who have ignored their investment failings, assuming the money would always keep pouring in. Now they are broke and forced to let her go, which will lead to deportation. Doesn’t sound all chipper and happy, does it? Trust us, this is worth your time.

This was something of a disappointment when it premiered: Audiences expected another “MIB” — a flashy mix of comedy and outrageous action — but there was too little comedy. That being said, it’s still a fun ride as dead-guys Jeff Bridges and Ryan Reynolds go chasing after evil spirits intent on back-flushing our universe’s one-way portal to the afterlife, dumping the worst of the damned dead back onto our streets. Great special effects, a smattering of humor (mainly provided by James Hong as Ryan’s “body”), fun co-stars including Kevin Bacon and Mary-Louise Parker, and eye-popping visuals based on the original Dark Horse comic make this good Sunday afternoon couch fodder.

This subtitled French series, filmed in a palette of stark grays, is one of the most popular and awarded TV shows throughout Europe and Australia — there’s even a hit video game! The ultimate gritty cop thriller, it goes beyond the crimes and victims to reveal how humans use law as a weapon against those they feel are “different.” And what happens when these marginalized citizens decide to make their own laws? Lawyers turn drug lords into “victims”; international criminals move across borders to kill with complete immunity; money equals free speech. A dark look at justice on the streets of Paris — brutal, shocking and highly recommended.

These three tough-cop dramas come from Sweden, which means literally anything goes: to censor a movie or TV show would violate their deepest cultural beliefs. Jakob Eklund plays the titular detective. He’s old-school but savvy enough to recognize that the world, itself, is literally being stolen by banks and corporations who kill and abuse with impunity. The first outing, “Zero Tolerance,” will hit you like a smack in the face as Falk hunts a human animal who shoots his own partners during a bloody jewelry heist. But the heist is just a setup for something far worse. The tension and action continue to ratchet through “Executive Protection” and “The Third Wave.” You may never watch American TV again.

This subtitled police miniseries from France is a knockout. Raggedty-haired Anne Le Nen stars as a cop investigating the particularly brutal murder of a female medical student, only to be yanked off the case without explanation. To continue in secret, she makes an uneasy alliance with the victim’s disbarred-doctor father (Bruno Todeschini), plus a fringe criminologist (trim blonde hottie Claire Borotra). Together or alone they pursue day-to-day police cases in Montpellier, often uncovering clues to the girl’s murder in surprising places. Terrific action scenes, grimy locales, a thriving, seedy, underworld and hidden agendas everywhere keep this plowing forward relentlessly. We liked it.

AS COOL AS I AM

Sarah Bolger (Princess Aurora from “Once Upon a Time”) has two big problems: her parents, Claire Danes and James Marsden. He’s away most of the time for work, and Mom doesn’t really seem to mind. Meanwhile, Sarah is maturing, learning about young love, sex and all the other things that make becoming an adult so cool. But with this knowledge comes the realization that her parents’ marriage sucks and she has a part to play in that. A solid and entertaining coming-of-age film with Jeremy Sisto, Thomas Mann and Peter Fonda, plus a cameo by Alanis Morissette.

Saoirse Ronan and Gemma Arterton — do we really need to say more?! — play a mysterious pair who pop up at a sleepy coastal town and begin cozy relationships with Sam “On the Road” Riley and Caleb Landry “Banshee” Jones from “X-Men.” But the two women share a very, very dark secret that they will kill to keep quiet. If this sounds like a horror film, we might argue that it’s more a sensual, morbidly romantic treatise on life, death and sex. OK, maybe it is a horror film. You decide.

OUT IN THE DARK

A Palestinian student (Nicholas Jacob) and an Israeli lawyer (Michael Aloni) fall in love in this romantic bit of subtitled Hebrew/Arabic schmaltz that plays out like “Romeo and Juliet” with the Middle East standing in for Verona. But that analogy is kept very low key so as to not distract from the very real dangers the two men face. An interesting potboiler that needed better direction, but watchable.

Taking “Shrek” to Broadway was a gamble that could have gone either way. The smash hit animated movie whose lead characters include an ogre, a donkey and a love-struck fire-breathing dragon was perfect for kids, and the plot had enough snide asides to keep adults entertained — but what would make it to the stage? The answer: All that and more! Nominated for eight Tonies, with 17 new songs all performed here by the original Broadway cast, this is a live-action hoot. Recommended.

Another knockout series from the History Channel that both entertains and educates. Join in the bloody adventures of Ragnar Lothbrok (Travis Fimmel), a real-life 9th century king whose exploits have been immortalized in scores of sagas. Fanatically devoted to the Gods, he believed himself to be a descendant of Odin, God of War, leading him to quite literally carve out a place in history, storming across current-day France and England. The series is nicely grimy, savage and full of fun facts. Did you know the Vikings invented both the comb and the magnetic compass? Really! Great stuff.