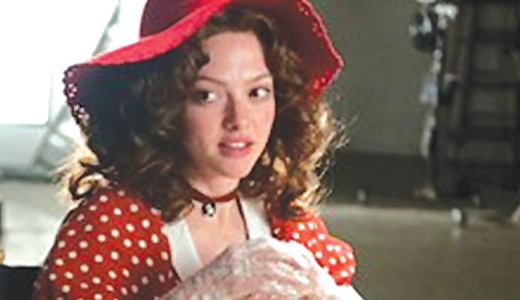 If you’re tuning in to see Amanda Seyfried suck dick, you’ll be disappointed (it’s a popsicle), but she does show plenty of skin in this look at poor choices, organized crime, sexual abuse and human trafficking in the early ’70s porn industry. She plays the titular actress, the product of a strict religious upbringing, who introduced white-bread America to oral sex under duress from her greasy husband (Peter Sarsgaard) and smarmy producer Gerard Damiano (Hank Azaria) in the scratchy grindhouse comedy “Deep Throat” (which we first saw at the old TheatAire Drive-In in Indiana back in the day). With James Franco as Hugh Hefner and Ron Pritchard as Sammy Davis Jr. Recommended, but not for everyone.

“There are 8 million stories in the Naked City.” In 1963, those words gathered all of America to their TV sets for the granddaddy of all cop dramas, lasting four glorious seasons and launching the careers of hundreds of stars. But what set it apart was the focus: Never content to just chase “bad” guys, each episode took us into the lives of ordinary people forced to make impossible choices. In many episodes there was no real villain, just someone caught in the gears of life and desperately trying to survive. Featuring 138 episodes, many of them Emmy winners, on 29 DVDs, with some of America’s most celebrated and enduring talents. Trust us, this thing rawks!

The original “Grown Ups” wasn’t exactly an artfest, but it was funny and gave Adam Sandler a much-needed shot in the bank account, so he decided to gather his buds back together — Kevin James, Chris Rock and David Spade — for another go-round. Salma Hayek, Maria Bello and Maya Rudolph return as the guys’ wives when Sandler decides he wants to move his family away from the nutjobs of the big city back to his simple, quiet hometown. Doesn’t go well. Costars and cameos include Steve Buscemi, Jon Lovitz and Shaquille O’Neal.

Jeffrey Dean Morgan was having a ball as Ike Evans, founder of the Miramar Playa Hotel, a glamorous place infested with mobsters like Ben “The Butcher” Diamond (Danny Huston). It’s a shame that Starz pulled the plug on this series so soon, but them’s the breaks when you mix sex, violence, lush landscapes, terrific actors and one of the best oldie sountracks on TV. This final season sees Evans’ problems go global as Cuban baddies flex their muscles, establishing a beachhead on Miami, uh, Beach, with their sights set on the Miramar. Co-stars lithe Olga Kurylenko, bodacious Jessica Marais, studly Steven Strait, plus Kelly Lynch and James Caan. This will be missed.

MY NAME IS NOBODY

One of our all-time favorite movies, succeeding as both a perfect Spaghetti Western and a spoof of the genre that so cleverly lampooned its excesses that few others were ever made. Terrence Hill stars, of course, spoofing his own legacy (“My Name is Trinity,” “Trinity is Still My Name”), along with aging gunslinger Henry Fonda in his last Western, all for executive producer Sergio Leone. The plot is a classic: young gunslinger idolizes retiring gunslinger who wants to put the killing behind him. The icing on the cake is Ennio Morricone’s amazing music, including a clever, hilarious homage to Wagner’s “Ride of the Valkyries.” Don’t miss this!

A dramatic telling of the day Kennedy was shot, told largely from the point of view of the emergency room staff of Dallas’ Parkland Hospital. Doctor Zac Efron and nurse Marcia Gay Harden lead a great cast that includes Paul Giamatti as photographer Abraham Zapruder and James Badge Dale as the brother of assassin Lee Harvey Oswald. An extremely powerful and bloody film that takes no stance on the many perceived conspiracies, focusing instead on workaday real people thrust into a tragedy that would forever alter America. Our highest recommendation.

THE HOBBIT: AN UNEXPECTED JOURNEY

Peter Jackson quickly released the first chapter of his penultimate telling of J.R.R. Tolkien’s “kid’s tale” to video back in March — so it must be time for an Extended Edition! Now available for Christmas consumption: several DVD, Blu-ray, UV and/or 3-D versions, all with about 12 minutes of additional Hobbital goodness, some with collectible Bilbo/Gollum statuary. But the best thing about these sets is the much-anticipated bonus material, which includes a 14-part chronological “making-of,” a biography of sorts on each of the Dwarf Company, and a look at how Tolkien’s dwarf songs were realized. If you need any more information than that, we suggest you go buy a life. A must-own.

THE THREE FACES OF EVE

It’s amazing to us how few people today remember this intimate Oscar-winning portrayal of mental illness by Joanne Woodward, based on real events. She plays a woman whose life begins to fall apart after finding herself in strange surroundings, unable to remember how or why she got there. Psychiatrist Lee J. Cobb uses hypnosis to discover that she has multiple personality disorder — she literally has several different people living inside her head. A brilliant film, now on Blu-ray.

Roland “Independence Day” Emmerich destroys the White House yet again in this cutting-edge tale of heroism, terrorism and jingoism starring Channing Tatum as an ex-Secret Service agent who goes all John McClane on baddies (with his little girl in tow!) when they take President Jamie Foxx hostage in a bunker deep beneath Washington, D.C. Ridiculous? Damned straight! But entertaining as hell — Prez Foxx even gets to fire an RPG while hanging out of a speeding limo! The terrific cast includes James Woods, Maggie Gyllenhaal as the president’s advisor and big Lance “Fringe” Reddick. Buy it.

You read that right! The complete AbFab experience starring Jennifer Saunders and Joanna Lumley at their bitchy, rude, cruel best, with Julia Sawalha as Saunders’ long-suffering child, Saffron. Sin is definitely in these 10 discs containing all 40 episodes from their six seasons — plus outtakes, episode commentaries, numerous in-character interviews and absolutely ALL of the AbFab specials — including the one where the girls carry the Olympic torch! The best part for us was that they have finally remastered the first three seasons, which had been nearly unwatchable in previous releases. The single most outrageous show ever to appear on TV: a steal at this price.

We were big fans of this SciFi Channel series when it first premiered in 1999, combining green-screen and puppet technologies (courtesy of the Jim Henson Company) to tell a wildly original tale of life among far-off worlds aboard a living spaceship named Moya. The brainchild of Brian Henson and veteran writer Rockne O’Bannon, the show’s idealistic and somewhat unseasoned producers struggled at times, but that just became part of the show’s gangly charm. SciFi, of course, screwed everyone by de-funding the show unexpectedly in the fourth season. Colorful, lively, earnest and, best of all, different. Recommended.

What an amazing world we live in. Thanks to modern technology, you can actually go out and buy your own personal Blu-ray copy of D.W. Griffith’s silent masterpiece, co-written by fellow Louisvillian Tod Browning. A nearly three-hour study of hatred, bigotry and its effect on human history told in four stories beginning with the crucifixion of Christ and ending in modern times. A stunning achievement everyone should see at least once a year.

Stephen King’s worst impulses run completely amok in this hit miniseries — and that’s a good thing. An average little rural town wakes up one morning to discover that it has been completely encased in a clear, seemingly impenetrable bubble, unable to communicate with the outside world. The huge cast is made up largely of lesser-known faces, led by an impossibly cute female sheriff/Maxim babe (Natalie Martinez), smokin’ Rachelle Lefevre and a hunky guy named “Barbi” (Mike Vogel). As with all SK tales, there are two frightening elements: the mysterious dome itself, and the real horror: the crazy-ass people trapped inside. One of TV’s brightest hours of recent years. Highly recommended.